Lawyer should know better – never lie on an insurance application 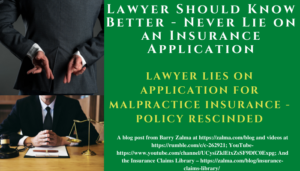 Travelers issued professional liability insurance to Grimmer, Davis, Revelli & Ballif ("Grimmer Davis"). Grimmer Davis is a law firm headquartered in Lehi, Utah. Matthew Grimmer was the sole shareholder in Grimmer Davis and had general leading and controlling responsibility for the company. Grimmer is a licensed attorney with knowledge of the Code of Conduct. Jacob Davis was employed by Grimmer Davis. Davis is also a lawyer with knowledge of the rules of professional conduct. Defendant Grimmer and Associates, P.C. ("G&A") is a law firm headquartered in Lehi, Utah. G&A is located in the same office as Grimmer Davis. Grimmer is the sole shareholder in G&A, and Davis was also employed by G&A. Grimmer made false statements in the application and in T ravelers Casualty And Surety Company Of America v. Grimmer Davis Revelli & Ballif, PC, et al ., No. 2: 19-cv-597-DAK-JCB, United States District Court, D. Utah (November 10, 2021) Travelers tried to repeal the policy.

Georgia Noel Inman and her twin brother Walker Patterson Inman III ("Patterson") were clients or former clients of G&A and its attorneys. Patterson was also a client or former client of Grimmer Davis and its attorneys. Georgia and Patterson's father died when they were twelve years old. Their stepmother served as their deceased father's personal representative and successor. However, there were allegations that she stole or hid assets from the estate. In 2013, Grimmer and G&A began representing Georgia and Patterson in the estate registration dispute with their stepmother in a lawsuit in Wyoming.

On June 27, 2018, Georgia filed a motion to disqualify the firm Grimmer Davis and the individual attorneys Grimmer and Davis from representing Patterson in the ongoing consolidated trust goals in Wyoming, citing various conflicts of interest and breaches of professional obligations to Grimmer, Davis, G&A and Grimmer Davis ("Grimmer parties"). In this disqualification motion, Georgia claimed that the Grimmer parties advocated positions that favored Patterson and were negative for her interests. The motion states that "Georgia has potential claims against parties and attorneys in this litigation" and "Georgia now has feasible claims, which it will pursue to undo both the Greenfield Plantation sale and the transfer of claims" – two transactions involving Georgia, Patterson , and Grimmer.

The South Carolina court also found that there was a material adversity between Grimmer, who at the time was trustee of a trust holding Patterson's assets. as the sole beneficiary, Patterson and Georgia.

However, in April 2019, Grimmer Davis requested that travelers issue a new policy to provide coverage retroactively to March 20, 2019, the 2018 policy expiration date. Grimmer Davis submitted an application for insurance, dated April 18, 2019, which Grimmer signed on behalf of Grimmer Davis. In response to question 27 in the application, ask if "you or any member or employee of your company is aware of any incident, act, error or omission that is or may be the basis of a claim under this proposed professional liability policy," Grimmer Davis replied "No."

To evaluate Grimmer Davis' request for a renewal policy with a retroactive validity date of March 20, 2019, travelers required Grimmer Davis to provide a letter confirming that its lawyers were not aware of any facts or circumstances after March 20, 2019, which may give up court to a claim under the renewal policy. Grimmer Davis provided the travelers with a letter, dated April 18, 2019 ("No Known Circumstances Letter"), in which it is partially stated that "[a] from the date of this letter we are not aware of any facts, circumstances, or losses from the period March 20, 2019 to now regarding our lawyers 'professional legal insurance. ”

One week later, April 25, 2019, claimed Georgia a malpractice lawsuit against Grimmer Davis, G&A, Grimmer and Davis based on their previous representation of her.

Montalvo, Traveler's Insurance donors, testified in a confirmation that if Grimmer Davis had disclosed Georgia's various claims and allegations against Grimmer's attorneys in Wyoming and South Carolina, as well as these court observations regarding ethical violations, travelers would not have issued the renewal policy.

Utah's laws provide for the termination of insurance in three circumstances. Utah Code Annotated Section 31A-21-105 (2) regulates termination and provides that "no misrepresentation… Shall affect the insurer's obligations under the insurance unless: (a) the insurer relies on it and it is either material or intentional; or (b) the fact that it was incorrectly presented or incorrectly justified contributes to the loss. "

Courts applying this statute have ruled that an insurer may cancel an insurance where the insurer relies on a material misstatement from the applicant;

However, travelers claim that they have the right to cancel the policy under all three of these justifications.

Grimmer on behalf of Davis Grimmer and stated in the application and the letter "No Known Circumstances" that no one at the company was aware of any facts, circumstances or losses that could affect the coverage under the insurance. However, when Grimmer signed these documents, Georgia Inman had repeatedly threatened significant claims against the firm and its attorneys, and two courts had already ruled that the attorneys' conduct was inappropriate and violated professional obligations to a former client.

The information that Grimmer provided or failed to provide to travelers occurred before travelers agreed to issue the policy. Although the policy's start date was backdated to date before the application, travelers only agreed to backdate the policy due to Grimmer's incorrect submissions and significant omissions. The start date of the insurance, which was obtained as a direct result of incorrect submissions and significant omissions, does not require that the terms of the policy apply to the issue. The more applicable law in this situation is the Utah Statute of Termination.

Utah courts have recognized that the doctrine of fair estoppel will prevent a party from taking advantage of wrongful petitions made in insurance. A reasonable prohibition can be invoked to prevent injustice where one has reasonably relied to one's detriment on a deliberate or negligent false representation of another. [ Barnard v. Barnard 700 P.2d 1113, 1115 (Utah 1985).]

The undisputed evidence shows that Grimmer knew or should have known that the information he provided to travelers was false and was given with the intention of obtaining the insurance. Intent to mislead can be deduced from clues. Grimmer had threats from Georgia Inman that she would raise any claims against the companies and lawyers. A few weeks before applying for the renewal policy, the Wyoming court issued a decision in favor of Georgia. That decision was issued five days after the previous insurance expired. Grimmer knew or should have known that he and his company needed insurance coverage. However, when he applied for that insurance cover and asked for it to apply retroactively, he did not mention any of these essential circumstances for travelers. He knew or should have known that travelers were concerned about this type of information when requesting a separate letter. Nevertheless, he did not disclose the information.

Georgia complained about Grimmer Davis' ongoing representation of Patterson, the alleged damage to assets owned by a trust to which Georgia is a beneficiary, and their obligations to her as a former client. Defendants argue that Georgia's claim against Grimmer Davis can simply be attributed to Georgia's confusion regarding the companies' names. She acknowledged some confusion about the relationship between the two companies, but she also made it clear that she wanted to disqualify Grimmer, Davis and both companies specifically. She repeatedly referred to "companies" in the plural, as well as the courts. There is no genuine dispute as to whether Georgia threatened claims against Grimmer Davis and its members related to conduct that occurred after she was represented by the G&A.

Under the terms of the policy, a "claim" is a claim for "money or services" against an "insured" for a "wrongful act." Georgia claimed that the damage to the trust occurred in March 2018, after Grimmer Davis was formed. Georgia repeatedly made such claims that stemmed from Grimmer Davis' representation of Patterson 2018 after Grimmer Davis was formed and represented Patterson. Grimmer does not claim to have been unaware of Georgia's claims and allegations.

Special Master & # 39 ;s Report and Wyoming Court & # 39 ;s Orders were clearly about both companies. Although Georgia's claim against Grimmer Davis had turned out to be undeserved, it was clear that she intended to bring them and bring them against Grimmer Davis, Grimmer and Davis. It does not matter if she made a valid claim, only that she threatened to make a claim. Grimmer either knew or should have known that the information he provided to travelers was false.

Grimmer's representations to travelers were essential because travelers trusted them when they issued the renewal policy and they contributed to the loss. A fact is essential for the risk that an insurance company takes if reasonable insurers would consider it as a fact that significantly increases the chance that the insured risk occurs and would therefore reject the application. If a fact "would, of course, affect the insurer's assessment in concluding the contract, estimating the degree or nature of the risk, or in determining the degree of insurance", then it is essential.

The defendants present no evidence to challenge the travelers' position. on trust or materiality. Defendants do not claim a substantively disputed fact that would prevent this court from passing a summary judgment.

Consequently, the court concluded that travelers have the right to cancel the insurance under Utah law. . The court further declares that the policy is invalid and Travelers has no obligation to defend or indemnify defendants under the policy. Therefore, the court upheld Travelers' request for summary judgment.

A lawyer should know that insurance is an agreement of the utmost good faith where neither party can do anything to deprive the other of the benefits of the agreement. In this case, a lawyer not only failed to act in good faith when he applied for malpractice insurance, he acted badly by giving the insurer a false representation that he did not know of any potential action against him or his company when he himself the agency had been informed of this. by Georgia and her agents and by order of two different courts. Termination was the only appropriate measure available to travelers.