Keeping Up with the Kardashians (Insurance Requirements) 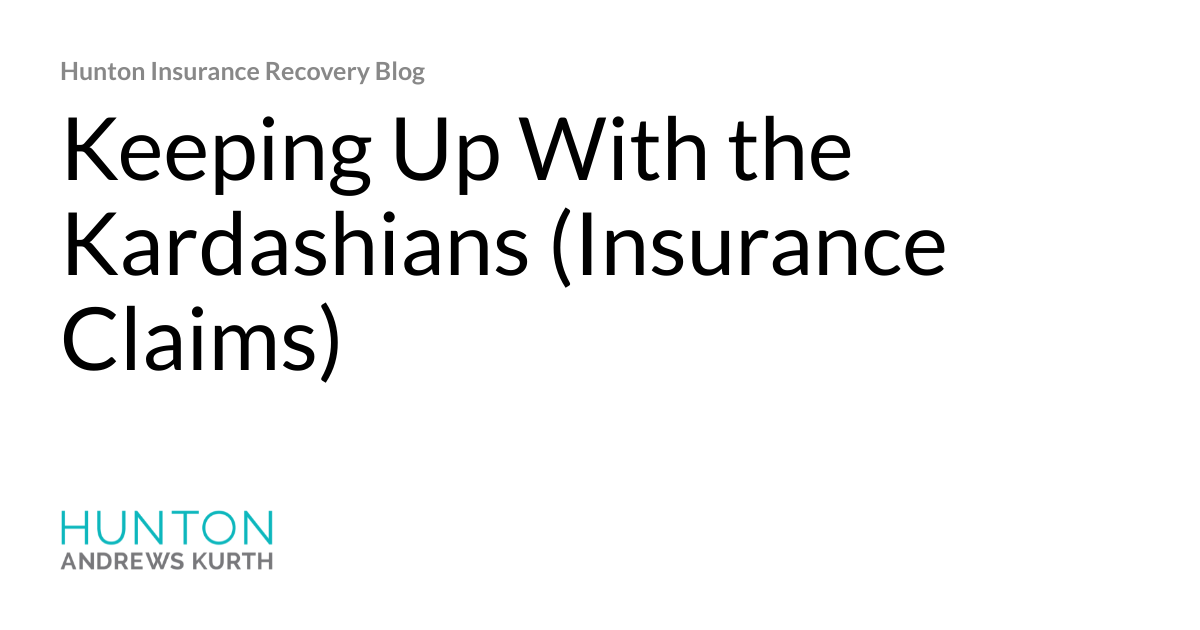 Last week, Kim Kardashian settled with the SEC after the SEC announced charges against the social media and reality TV star for promoting a cryptocurrency token called EthereumMax, on her Instagram account, where she has more than 330 million followers, without disclosing what she was paid for the campaign. Kardashian agreed to pay $1.26 million in penalties, including the $250,000 EthereumMax paid her to market its crypto tokens to potential investors. SEC Chairman Gary Gensler said Kardashian’s case is “a reminder to celebrities and others that the law requires them to disclose to the public when and how much they are paid to promote investments in securities.”

Kardashian is not alone in running afoul of federal securities regulations when entering the “crypto influencer” market, as many other high-profile individuals — Floyd Mayweather and DJ Khaled, to name a few — have been subject to similar proceedings. This isn’t Kardashian’s first allegation stemming from social media marketing. In 2015, Kim Kardashian advertised a morning sickness medication on her Twitter and Instagram accounts, praising the drug for combating her morning sickness, which she described as “pretty bad”. After review, the FDA determined that the postings were misleading because the postings did not communicate any risk information related to the drug, and the FDA issued a warning letter to the drug’s manufacturer.

Mrs. Kardashian’s latest spat with regulators is one of many legal battles she and her family members have fought over the years. These various claims potentially involve multiple insurance coverages and serve as a reminder to individuals and businesses facing similar exposures that they need a comprehensive insurance program to properly mitigate the risk of uninsured losses.

Several insurance products may respond to provide coverage for these and other types of regulatory inquiries and actions. For example, a well-designed and robust cyber insurance program will often include media liability coverage for claims arising from postings on websites or social media. Some policies may provide even broader coverage for wrongful acts such as defamation, copyright infringement or misappropriation of proprietary rights, unfair competition, and unfair trade practices resulting from the publication, broadcast, blogging, distribution, editing, production, recording, tweeting, or spoken communication. traditional or digital methods.

However, this coverage may be under-limited or may contain exclusions for certain types of regulatory action, as well as potential exclusions for willful acts and gain of personal profits to which the insured is not entitled. Many cyber policies also contain securities exclusions that apply to claims that have allegedly violated securities laws, and some may also contain exclusions for alleged violations of consumer protection laws or for alleged deceptive business practices. More extensive coverage may be available through media liability insurance purchased separately. Such policies are usually specialized in the type of media used by the insured and can be customized through robust recommendations.

In 2017, Angela Renee White – known professionally as Blac Chyna – sued the Kardashians for defamation, intentional interference with contract and intentional interference with potential financial benefits. Chyna is the ex-fiancé of Rob Kardashian, with whom she starred in the E! network’s reality show Rob and Chyna. Chyna alleged that the Kardashian family “kills[ed]” reality show’s second season, causing her significant financial loss. Chyna sought millions in compensatory and punitive damages. In the end, however, the jury awarded Chyna no damages. The case was dismissed, but Chyna officially appealed her case earlier this year.

The personal injury section of a commercial general liability (“CGL”) policy typically includes coverage for advertising injury. While this often provides coverage for libel and slander allegedly committed in advertising the insured’s goods and services, the allegations in Chyna’s suit do not appear to be limited to such acts in advertising the Kardashians’ goods and services. Nonetheless, under an insurer’s broad duty to defend—which is implicated even if there is the possibility of coverage based on the plaintiff’s pleading—commercial general liability insurance should likely provide a defense to this type of suit.

Next, the Kardashians should make sure their company has product recalls where appropriate. Each of the Kardashian-Jenner sisters owns and markets retail and consumer products, increasing the risk of losses due to product recalls. In August, France recalled Kardashian Beauty’s Black Seed Dry Oil because the hair product contains a substance banned for sale in the country. Product recall insurance can, among other things, cover expenses associated with a product being withdrawn from the market, including both voluntary recalls and government recalls.

Product recall coverage can also help companies mitigate negative publicity associated with the recall by providing coverage for crisis communications/PR companies. The lost profits (business interruption losses) associated with product recalls may also be covered, and more robust policies will include coverage for malicious tampering, contamination and product liability in addition to recall-related costs and expenses.

Further, AIG paid Kardashian under a private client group policy after she was robbed of $10 million in cash and jewelry during Paris Fashion Week in October 2016. Two years later, AIG sued Kardashian’s former bodyguard in a subrogation action to recover $6.1 million in losses. AIG argued that Duvier was negligent in failing to protect Kardashian from the robbery. AIG and Duvier settled the case in 2020, but details of the settlement have not been made public. Presumably, Kardashian’s policy with AIG was a valuables policy that was part of an estate policy or series of policies.

Kardashian’s insurance claim also extends to property damage. The Kardashians were among the many celebrity evacuees when the Woolsey-Malibu fire burned through California homes in 2018. Kim Kardashian revealed that the fire hit her Hidden Hills property in both a tweet and on Season 16 of Keeping Up With the Kardashians. Most home insurance policies cover fire damage, including damage from forest fires. However, policyholders should be aware that some insurance companies may deny coverage to homeowners who live in areas more prone to wildfires, such as Hidden Hills and Calabasas, where the Kardashian homes are located.

Liability insurance for board members and officials

Finally, given the Kardashians’ expansive business ventures, they should also ensure that they obtain robust directors and officers coverage and other appropriate professional liability coverage. D&O insurance is an important risk management tool that protects directors and officers of a company from personal liability if the company is unable to replace them. D&O insurance can also protect company balance sheets by covering expenses paid as compensation on behalf of protected individuals and by providing coverage for certain claims made against the company directly.

D&O coverage should be of particular interest to Kim Kardashian, who recently launched Skky Partners, a private equity fund targeting consumer and media companies. Many private company D&O policies for private equity firms are linked to investment adviser and fund liability coverages—professional liability coverages designed to insure claims for alleged wrongdoing in fund operations. Investors and managers alike can benefit from robust D&O coverage to protect their personal assets in the event of a claim.

Many business and investment risks can be mitigated with a comprehensive risk management strategy that uses the insurance coverages discussed above. Businesses and high-profile individuals, like the Kardashians, should work closely with insurance brokers and consult with experienced insurance coverage advisors to help negotiate, acquire and renew policies that can help reduce the risk of uninsured losses should a claim occur.