Intentional damage is not insurable 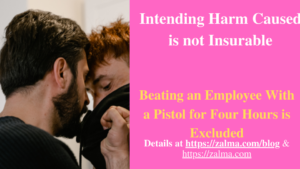 judgment, arguing that it was not obligated to defend or indemnify defendants, Hamdallah, LLC, et al. (“the LLCs”), against the claims asserted by the plaintiff, Nixon Calix. The trial court granted summary judgment and dismissed all claims against State Farm with prejudice.

According to alleged facts, Calix was employed in the meat department of Ideal Market #6, where Mario Kaki, Mohammad Kaki and Muwafak Kaki were also employed in managerial capacities. Mohammad Kaki and Cory Elbarqa transported Mr. Calix to 2309 L & A Road. There, Calix was accused of stealing meat from Ideal Market #6 and being “subjected to violent physical assault and/or violent violence” by Mario Kaki, Mohammad Kaki and Cory Elbarqa. Mario Kaki brandished a firearm, pointed it at Mr Calix and threatened to kill him if he did not confess to the alleged theft. When Mr. Calix refused to confess, Mario Kaki used the firearm as well as his fists and legs to beat Mr. Calix’s head, face and body for approximately four hours. Mr Calix claimed he was “severely punched, beaten, kicked, assaulted and terrorized” by Mario Kaki while Mohammad Kaki and Cory Elbarqa looked on and prevented him from leaving. As a result, Calix claimed he suffered serious psychological and physical injuries.

Mr. Calix alleged that his injuries were caused by the defendants’ intentional acts of assault, battery, kidnapping, false imprisonment and intentional infliction of emotional distress. Additionally, Calix argued that LLCs were vicariously liable under the doctrine of respondeat superior for the derivative liability, negligence and fault of its employees, and were liable individually, jointly, and in solido through its own negligence, specifically for negligent hiring, negligent training, negligent supervision, and negligent retention.

State Farm filed a motion for summary judgment, arguing that there is no coverage under its policies for the claims against the defendants. .

The trial court entered a written judgment granting the motion for summary judgment and dismissing all of Mr. Calix’s claim against State Farm with prejudice.

The trial court found that regardless of the legal theory asserted by Calix, the intentional acts of the owners/managers of the defendant corporations, particularly the actions of Mario Kaki, are the substantial cause of Calix’s alleged damages. Coverage for these actions was specifically excluded by the policies.

A dispute over the question of whether the language of an insurance policy by law provides coverage for a party can properly be resolved in the context of a motion for summary judgment.

The extent of coverage is determined by the intent of the parties, as reflected by the wording of the policy. An insurance company may limit coverage in any way, as long as the limitations do not conflict with statutory regulations or public policy.

Mr. Calix argued that the “anticipated or intended damage” exclusion does not apply to exclude vicarious liability or liability based on answer superior. Finally, he argued that State Farm failed its burden in its second motion for summary judgment because his injuries arose out of the negligent hiring, training, supervision, and/or retention of multiple employees by multiple employers and not a single event and action by one individual .

The Court of Appeal concluded that reasonable minds could not disagree that Mario Kaki’s actions of using a firearm as well as his fists and legs to beat Calix’s head, face and body for approximately four hours, as they accepted the allegations as true or intended to cause bodily harm.

Accordingly, there was no error in the district court’s conclusion that the policies excluded coverage of any liability imposed on any defendants arising from Mr. Calix’s allegations of assault, battery, kidnapping, false imprisonment and/or intentional infliction of emotional distress allegedly committed by Mario. Kaki, Mohammad Kaki, Muwafak Kaki and Cory Elbarqa.

The district court correctly pointed out in its ruling that even if the defendants’ actions are considered negligent, any liability imposed on the defendants as a result of their alleged actions is excluded from coverage based on bodily injury to a co-employee.

All claims that the LLCs are liable based on claims of negligent hiring, negligent training, negligent supervision, and negligent retention arise out of or are dependent on Mario Kaki’s actions. Therefore, there was no coverage under the current policies based on allegations of negligence for damages resulting from Mario Kaki’s intentional acts and the court’s decision was affirmed.