Insured must live in residence | Zalma on insurance 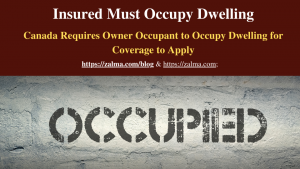 IN Dang C. v. Industrielle-Alliance, Assurance Auto et Habitation Inc., 2022 QCCA 1739, Court of Appeal for the Province of Quebec, opinion in French, held that Dang was the sole insured under a policy that covered “the owner’s residence” (“owner occupier“) and “your residence” (“votre bâtiment d’habitation“).

The defendant had insured the house since 2012 and in May 2018 the house was damaged by fire. During its investigation, the insurer concluded that the complainant had traveled sporadically to the United States from 2013 to 2016 and that she had been living in the United States since February 2016 with no intention of living in Quebec.

However, the house was continuously occupied by family members. During the trial, Dang claimed that she intended to return to Quebec. In addition, she no longer had auto insurance in Quebec, had acquired a new residence in Texas with her husband, tried unsuccessfully to sell her house, and obtained her permanent resident status and green card in the United States.

The insurer stated with two independent insurance company representatives that they would not have renewed the policy if they knew the insured had no intention of coming back to live in the house.

According to Dang, “occupant” means a person who either personally or through another person exercises a real right to property without necessarily having a lease. As such, according to Dang, the Superior Court judge erred in concluding that she was not occupying her residence at the time of the fire.

The Court of Appeal’s decision

The Court of Appeal found that there were no ambiguities in the insurance and that the purpose of the agreement is to insure the owner who lives in the home. Dang did not comply with the condition for at least two years before the fire.

The court concluded that “owner’s residence” must be construed according to its ordinary meaning and in a manner which an ordinary person seeking insurance would understand. The appeals court also added that it would not interfere with the trial judge’s decision to retain the testimony of the two independent insurance company representatives to support the decision to void the policy.

The Court of Appeal concluded that an insurer can refuse to indemnify an insured if the risk that occurred is no longer covered at the time of the injury following a change in circumstances. In such a case, the insurer’s willingness to never cover such risk applies and is not an aggravation of a risk.

In Canada, the policy must be analyzed and one must identify what risk of loss the insurer intended to insure. Once the subject of the insurance has been identified, the court decides whether the insurer had shown the intention to insure the risk that occurred, that is, a house not inhabited by the insured.

The word “resident” adds to the word “owner” the concept of living in the insured house. In addition, the phrase “your residence” confirms the meaning that the insurer intended in giving its agreement which, until February 2016, corresponds to what Dang wanted to insure, her house in Trois-Rivières.

Our neighbors in Canada agree with the US courts that a policy that insures a dwelling and requires the insured to live in the dwelling for coverage to apply. This is not an exception, but acts as one. As the insurance is a personal indemnity agreement – ​​it does not insure the home – it only insures the insured against the risk of loss of the home. If the insured no longer lives in the home – and this insured moved to the country and became a permanent resident of Texas, she did not live in the home in Quebec and therefore the insured risk changed and she could not recover anything under the policy. Americans, with home owner policies, face the same problem. If I left my home and moved to Texas, my California Homeowner’s policy would not insure me against California house loss unless I informed the insurer, changed my coverage from a home owner to a renter policy. Dang hid the loot from his insurer and lost.

An insurance coverage and claims management writer, consultant and expert witness with more than 48 years of practical and courtroom experience.