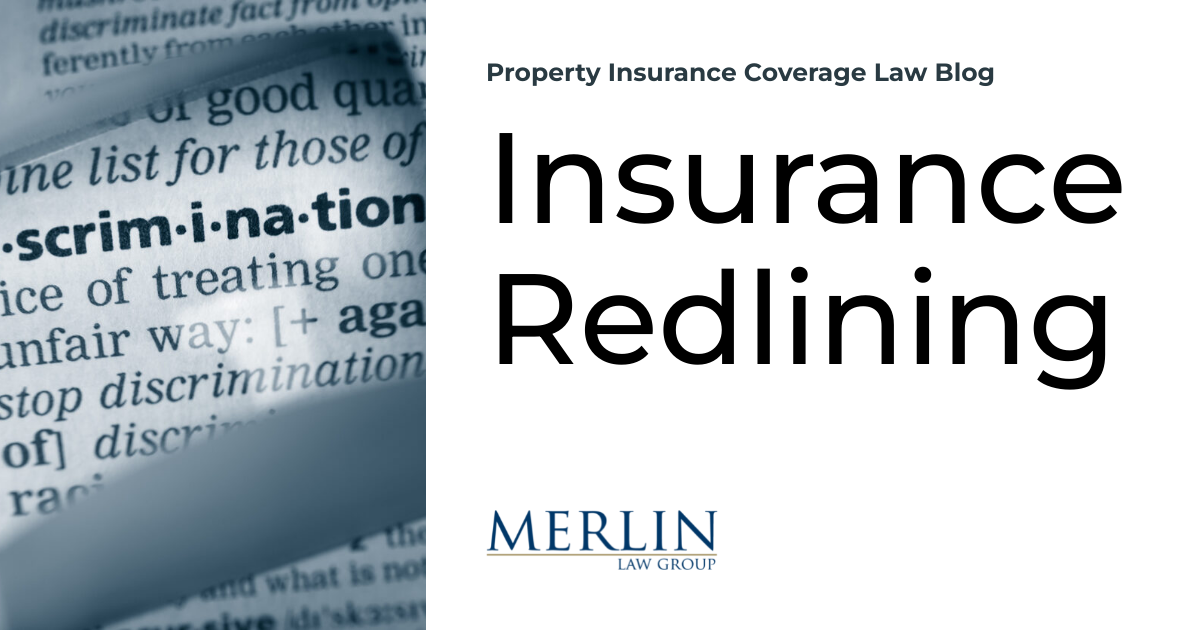 “Redlining”, in the context of insurance, is an illegal practice in which insurance companies avoid providing insurance to individuals living in communities because of the race, color, or national origin of the residents of those communities. As we celebrate Martin Luther King Day, as noted in yesterday’s post, Martin Luther King Dayis important to recognize the Civil Rights Movement prompted “anti-redlining” laws that still affect insurance today.

The term “redlining” has been noted in Wikipedia as follows:

The specific process known as “redlining”

; in the United States occurred against the backdrop of racial segregation and discrimination against minority populations. It had its origins in the sales practices of the National Association of Real Estate Boards and theories of race and property values ​​codified by economists around Richard T. Ely and his Institute for Research in Land Economics and Public Utilities, founded at the University of Wisconsin in 1920 With the National Housing Act of In 1934, the federal government began to be involved in the practice and the simultaneous establishment of the Federal Housing Administration (FHA). The FHA’s formalized redlining process was developed by their chief economist, Homer Hoyt, as part of an initiative to develop the first mortgage underwriting criteria. Implementation of this federal policy accelerated the decline and isolation of inner-city minority neighborhoods through the withholding of mortgage capital, making it even more difficult for neighborhoods to attract and retain families who can purchase homes. The discriminatory assumptions of redlining exacerbated residential racial segregation and urban decay in the United States.

Redlining maps even became prominent under private organizations, such as appraiser JM Brewer’s 1934 map of Philadelphia. Private organizations created maps designed to meet the requirements of the Federal Housing Administration’s warranty manual. Lenders had to consider FHA standards if they wanted to get FHA insurance for their loans. FHA appraisal manuals instructed banks to avoid areas with “disharmonious racial groups,” and recommended that municipalities adopt racially restrictive zoning ordinances. Between 1945 and 1959, African Americans received less than 2 percent of all federally insured home loans.

Banks and mortgage lenders were not the only private entities to develop procedures for redlining. Property insurance companies also instituted rigid redlining policies in the post-World War II period. According to urban historian Bench Ansfield, the postwar advent of comprehensive homeowner’s insurance was limited to the suburbs and withheld from colored neighborhoods in American cities. A 1964 Aetna bulletin advised insurers to “use a red line around questionable areas on territorial maps.” The New York Urban Coalition warned in 1978, “A neighborhood without insurance is a neighborhood doomed to die.”

A law review article published last year, The color of property and auto insurance: Time for a change,1 presented a historic issue of racial discrimination in the property insurance market with the following example of it against a future black Supreme Court justice:

Thurgood Marshall was denied car insurance while living in Harlem in 1940 because he was told it was a “congested area.” He wrote that while the problem of insurance discrimination was getting worse, it was “virtually impossible to settle a legal case because insurance is usually denied on some technical basis.”

The Law Review article noted the long history of racial discrimination in property insurance that led to laws preventing the practice:

Property insurance has been unevenly distributed by race; the story of mid-20th century urban property insurance is partly a story of racism. Many public and private forces excluded African Americans from home ownership including insurance companies and the federal government…

The Hughes report found that insurers’ decisions to refuse to write policies in urban areas altogether or to charge more for urban residents were in fact based not on data but rather on unsupported assumptions about costs and risks, noting that “although insurers has cataloged a list of restrictions to underwrite urban cores, responses to the panel’s requests for information determined that companies have virtually no separate statistical information on their experiences in urban cores Insurance industry witnesses admitted that without data they had assumed that urban areas were more expensive to insure than other areas. Race, ethnicity, and risk were intertwined in the insurance industry; 1950s policy books instructed underwriters on the need to determine applicants’ ethnicity and race to determine their risk. Yet redlining did not reflect the actual risk in urban areas or the cost of f ear safe properties in these areas correctly.

Despite laws that attempt to address this inequity, issues of “redlining” and racial discrimination in the property insurance market remain. Insurance law professor Daniel Schwarcz noted the following:

Despite the importance of insurance discrimination in modern America, the law does remarkably little to combat the risk that this discrimination will unfairly harm minority or low-income communities. For example, state laws prohibiting “undue discrimination” in property and casualty insurance markets simply require insurers to have an actuarial justification for their discriminatory practices. Although some states also prohibit discrimination based on factors such as race, ethnicity, national origin, or income, courts and regulators interpret these laws extremely narrowly. As a result, these more specific anti-discrimination laws only prohibit insurers from formally incorporating prohibited characteristics into their models or intentionally constructing proxies for those characteristics.

In contrast, state insurance laws and regulations completely ignore the prospect that face-neutral practices may disparately affect minority or low-income populations. This is of course a risk whenever there is a correlation between a policyholder characteristic used by insurers (such as zip code) and a suspected policyholder characteristic (such as race or income). Insurers and some commentators vehemently defend this approach, suggesting that impact assessments of any kind are fundamentally incompatible with risk-based insurance pricing. And undermining risk-based pricing, the argument goes, risks jeopardizing the competitiveness and efficiency of private insurance markets in the United States.2

The point of today’s blog post is to highlight that the Civil Rights Movement led by Martin Luther King resulted in laws affecting property insurance and its availability. Laws are rarely perfect. The issues of racial discrimination in the property insurance market are still being studied today, with new laws addressing new methods of such discrimination.

…nonviolence is the answer to the defining political and moral question of our time – the human need to overcome oppression and violence without resorting to violence and oppression. Civilization and violence are antithetical concepts. Negroes in the United States, following the people of India, have shown that nonviolence is not sterile passivity, but a powerful moral force that creates social transformation. Sooner or later all the people of the world will have to discover a way to live together in peace and thereby turn this pending cosmic elegy into a creative hymn of brotherhood. If this is to be achieved, man must develop for all human conflicts a method which rejects revenge, aggression and retaliation. The basis of such a method is love.