Insurance is an agreement on personal compensation 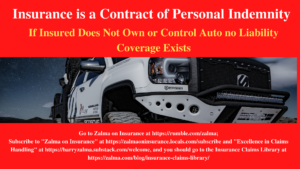 The appellant James West appealed against the summary judgment in favor of Shelter Mutual Insurance Company ("Shelter"). West claimed that the district court erred in granting Shelter a summary judgment. I James West v. Shelter Mutual Insurance Company, No. CV-21-54, 022 Ark.App. 38, Court of Appeals of Arkansas, Division IV (January 26, 2022), the Court of Appeal resolved the disputes over who Shelter insured.

June 10, 2018, West; Stacy Mathis, Nancy's adult son; and others were involved in a motor vehicle accident. West, who was riding his motorcycle at the time, was alleged to have suffered serious injuries due to Stacy's negligent operation of the Dodge Ram identified on Nancy's insurance. Stacy had no policy of his own.

West filed a claim for the loss; However, during the investigation into West's claim, Shelter discovered that Nancy was not, and never had been, the registered or titled owner of the Dodge Ram driven by Stacy at the time of the accident. Instead, Shelter stated that Stacy was the sole registered and titled owner of Dodge Ram, and that he was not living with Nancy at the time of the accident.

Shelter denied in a letter to Nancy on September 11, 2018 liability protection. for the accident, stating: "Specifically, you are the only one listed" Named Insured "on the insurance returns and you do not own, nor have you ever owned, the 1996 Dodge Ram, the vehicle listed on your insurance. Instead, your adult son is , Stacy Mathis, who does not live with you, the sole registered owner of the 1996 Dodge Ram. of bodily injury or property damage resulting from an accident caused by the insured's ownership, maintenance or use, of the "described car" or a "non-owned car." Because you, the sole insured named on the insurance, do not own 1996 Dodge Ram (the vehicle listed on the declaration page of your insurance), Dodge Ram does not meet the policy definition of the "described car."… Therefore, Shelter denies coverage for this claim under this policy. "

In a similar letter to Stacy, Shelter again denied coverage of the claim and refused to defend Stacy in the underlying lawsuit filed by West.

Shelter filed a successful motion for summary judgment. Usually, when appealing a summary judgment, the evidence is seen in the light that is most favorable to the party opposing the motion, and any doubts and conclusions are resolved against the moving party.

West argued in the appeal that both Stacy and Dodge Ram were covered by Nancy's liability policy through Shelter. West claimed that Shelter, just before the wreck, issued evidence of insurance covering the Dodge Ram, but immediately after the accident, it denied its coverage. He also claimed that Shelter revoked the coverage and denied the claim arising from the accident due to fraud and misrepresentation in the original police application material.

Nancy did not own Dodge Ram, Stacy did. As the Dodge Ram stated in the declarations was not owned by the named insured, it did not meet the policy definition for the described car. Furthermore, according to the policy definitions, because Nancy, the only named insured, had no ownership, no interest in, no possession of or ability to exercise control over the Dodge Ram, she lacked the authority to authorize Stacy to use the truck.

Shelter denied West's claim because it would not be paid under the terms of the car liability insurance. Consequently, the court upheld the summary judgment.

Shelter had learned of the lies Nancy made in the insurance application before the Shelter accident could have terminated the insurance. It did not. Rather, its investigation revealed that Nancy did not own, control or have any interest in the vehicle subject to the insurance, her son. Since the insurance is a personal indemnity agreement, it only insured the risks that Nancy faced, which were non-existent. The summary judgment was therefore given correctly.