Insurance companies should not sue each other 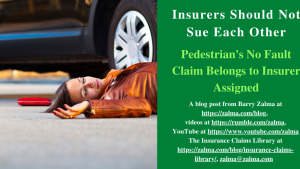 Insurance companies are professional litigators. They get sued and often get sued. Typically, they avoid suing other insurance companies for fear of setting precedents that will affect the entire industry. IN Beth Bracy, Plaintiff, and ZMC Pharmacy, LLC, Riverview Macomb Home & Attendant Care, and Michigan Spine and Pain, Intervening Plaintiffs v. Yolanda Yvette Nichols, Defendant, and Farmers Insurance Exchange, Defendant/Cross-Plaintiff-Appellant, and GEICO Damages Company, defendant/cross-defendant, No. 359397, Court of Appeals of Michigan (Oct. 13, 2022), the insurance companies involved should have avoided the litigation against each other and voluntarily settled the dispute with the injured parties and each other.

On March 7, 2012, Geico issued an automobile insurance policy to Marcus Nichols (Marcus). Three years later, Marcus added a 1993 Chevrolet Lumina owned by his mother, defendant, Yolanda Nichols (Nichols), to the policy. Nichols was identified as a driver on the policy, but she was not a named insured on the policy. Nichols was driving the Lumina when she was involved in a car accident with plaintiff Beth Bracy, a pedestrian, on August 23, 2014. Bracy sought personal protection insurance (PIP) benefits under the Michigan no-fault Act, MCL 500.3101 a seq., through the Michigan Assigned Claims Plan (MACP). MACP awarded the claim to Farmers, and Farmers paid Bracy PIP benefits for her accident-related injuries.

Bracy filed a complaint against Farmers and Nichols, alleging personal injury liability against Nichols, alleging that Farmers had unreasonably and illegally refused to pay her PIP benefits pursuant to the no-fault law. Farmers filed a third-party complaint against Geico for reimbursement pursuant to MCL 500.3172. Later, Farmers sought summary disposition against Geico, arguing that Geico had the highest priority for Bracy’s benefits. Geico also filed a motion for summary disposition against Farmers, arguing that Farmers had the highest priority for Bracy’s benefits. The district court granted Farmer’s motion.

Geico appealed to the Michigan Court of Appeals which remanded to the trial court for entry of an order granting summary disposition in favor of Geico “because GEICO was not the insurer of the owner, registrant or operator of Lumina and therefore had no obligation to pay Bracy’s PIP benefits pursuant to MCL 500.3115(1).”

Farmers argued that Nichols’ vehicle was insured under Marcus Geico’s auto insurance policy, and that Bracy was therefore entitled to recover no-fault benefits under that policy.

An uninsured pedestrian who suffers accidental bodily injury must seek PIP benefits from insurers in the following order of priority:

(a) Insurers of owners or registrants of motor vehicles involved in the accident.

(b) Insurers of operators of motor vehicles involved in the accident.

When there is no such insurer, the uninsured pedestrian can seek PIP benefits through the MACP.

In this case, the trial court did not err in granting summary disposition to Geico because Geico is not the insurer of the owner, registrant, or operator of Lumina and therefore was not obligated to pay Bracy’s PIP benefits pursuant to MCL 500.3115(1) ).

In this case, it is undisputed that Marcus was neither the owner nor the registrant of Lumina; thus, the Lumina was not an automobile for which he was “required to maintain security under Chapter 31 of the Michigan Insurance Code[.]” Accordingly, Bracy was not an “eligible injured person” under the terms of the Geico policy.

Marcus had no insurable interest in Lumina because Lumina was solely owned and operated by Nichols. And there was neither evidence that Marcus had such use of the Lumina as to constitute ownership under MCL 500.3101, nor that he intended to acquire the vehicle. Lumina’s existence did not give Marcus any benefits, and the destruction of Lumina would not have caused him any loss.

Geico argued that the trial court’s grant of summary disposition in its favor was also proper because the policy was invalid in light of Marcus’s misrepresentations in obtaining that policy for a vehicle in which he had no insurable interest.

The district court rejected Geico’s misrepresentation argument as moot because it granted Geico’s motion for summary disposition “on the basis of priority.” The argument remains moot on appeal for the same reason.

As a general rule, an appellate court will not decide disputes.

Why this litigation between insurers took place is difficult to understand. Farmers was awarded by the state under MCAP to provide benefits to the injured pedestrian and did so, according to the award. Then it argued that Geico was obligated to pay the benefits even though it had no obligation to do so, and the district court and the appeals court agreed. The attorney fees and court time could have easily been avoided by the two insurance companies working together to resolve their differences, especially after losing twice.