Hurricanes season 2019: What is shaping 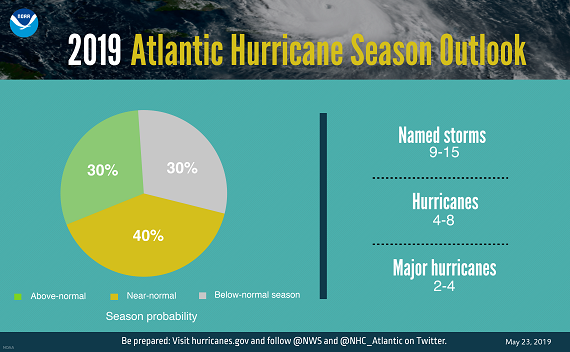 Hurricanes season began on June 1 and runs until November 30th. The National Oceanic and Atmospheric Administration, or NOAA, predicts a 40% chance of "almost normal" hurricane season. There is a 30% chance that the season may be worse and a 30% chance that it may be better than the Middle Ages.

Don't let "near normal" prediction bring you to a false sense of security – hurricane preparation is still urgent, especially for those living in the southeast and in the Atlantic coastal areas. According to a recently estimated Storm Surge Report by CoreLogic, the Atlantic hurricane season puts 7.3 million homes at risk with an estimated $ 1.8 trillion reconstruction cost.

"Florida appears to be the most vulnerable state, with more than three times more homes at risk (2,913,886) than others ranked Louisiana (827,032). Florida also stands out for potential damage, with risky structures having An estimated reconstruction cost of $ 604 billion – one-third of the total for all 19 Gulf Coast and Atlantic Coast states.

Narrowing down to the metropolitan areas of Miami, New York City, Tampa, New Orleans and Virginia Beach, Virginia is at the greatest risk. New York City Underground, which includes Philadelphia and much of New Jersey, accounts for 831,000 homes with estimated replacement costs of $ 330 billion in damage, with 827,000 at risk in the Miami metropolitan area, including West Palm Beach and Fort Lauderdale. $ 166 billion. "

Florida does not take hurricanes easily. Orlando Sentinel posts thoughts from the region and talks about past storms in its news report, Welcome to the Hurricane Season 2019.

The Floridians should act quickly for discounts on some hurricane stores. Until June 6, some hurricane supplies can be purchased tax free during the Florida Sales Tax Vacation. Read more from the Florida Department of Revenue's tax information Publishing: Disaster Preparedness Sales Tax Weekend – May 31 to June 6, 2019

Issuance of cat bonds strong during the first half of the year: Moody’s