How to read, understand and interpret an insurance policy 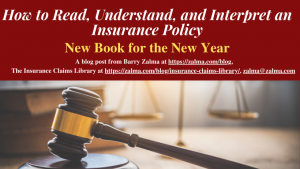 To start the new year I published my latest insurance coverage and claims book titled: A

The challenge for any insured when making a claim is to determine what was insured and what was not. Likewise, every insurance practitioner when faced with the need to settle a claim by an insured must determine whether or not the policy, by its wording, provides coverage to replace the insured. To do so, the insured and the insurance personnel must read, understand and interpret the policy and apply the policy wording to the facts determined by the claims investigation.

In order to fairly present or investigate a claim, both the insured and those representing the insurer must understand what insurance is and its history of compensating those who suffer losses as a result of a fortuitous event.

An insurance policy is a contract. It is a written agreement between the person named as insured and the insurer. Each party to the insurance contract makes promises to each other. The insured, for example, promises to pay the premium charged and in the event of a claim to cooperate in the investigation by the insurer and will do nothing to deprive the insurer of the benefits of the policy. The insurer, on the other hand, promises to carefully investigate any claim presented by the insured fairly and in good faith and to do nothing to prevent the other from receiving the benefits of the contract.

The contract of adhesion

Because policies are often binding contracts written by the insurer that are available to an insured who is given two choices: to accept or reject the policy as written. Contracts of adhesion are usually carefully interpreted to favor the insured because the insured had no choice in the promises made by the policy.

Insurance companies believe that the insurance contracts they offer to the public are all clear, fair and unambiguous. People who are insured, especially when their claims are denied, believe that the contracts are unclear, ambiguous, confusing and designed to avoid payment of legitimate claims. When the insurer and the insured do not agree on the meaning of the insurance wording, they take their disputes to court.

As courts in the United States have been called upon to interpret insurance contracts for more than two centuries, they have developed methods and rules to permit fair and appropriate interpretations of an insurance policy. Anyone who is faced with the need to handle an insurance claim must be able to meet the requirements of the insurance contract. To do so, they must be ready and able to read and understand the policy. This book will help the reader read, understand, and interpret an insurance policy the way a judge would in order to resolve potential claims without having to seek the help of a court.

Insurance is a written agreement

An insurance contract is an agreement where one undertakes to indemnify another against loss, damage or liability, arising as a result of an unknown or contingent event.

No matter how simple the definition, insurance contracts are the most litigious type of contract executed in the United States. As a result, judges across the country are asked to interpret the terms and limitations of insurance in order to resolve disputes over insurance coverage.

When an insured, a claims representative, a claims adjuster, a coverage attorney, or an insurance manager is faced with a coverage dispute, they must attempt to resolve the dispute using the same method used by the courts.

read, understand, interpret and apply the terms of an insurance policy. The methods used by the courts should be emulated by any insured, policyholder’s attorney or policyholder when faced with the obligation to determine whether or not the policy provides coverage to indemnify the insured.

Although insurance contracts have particularities, they are still contracts to which the usual rules of contract interpretation apply. The mutual intention of the parties at the time of the contract’s issuance should govern its interpretation. Such intention shall, if possible, be inferred solely from the written provisions of the agreement.

The words of the agreement are understood by the trial or appellate court in their “ordinary and popular meaning” unless they are “used by the parties in a technical sense, or unless a special meaning is given to them by usage.” Any ambiguous terms must be interpreted by the court to mean that the insurer believed the insured understood them at the time of formation, and ambiguities must be resolved in favor of coverage.

The rules for contract interpretation

The California Supreme Court sets rules for the interpretation of insurance policies, which are similar to those of almost all other states. As a result, courts must consider:

The policy should be read as a layperson would read it and not as it can be analyzed by a lawyer or an insurance expert.

The book is available on Amazon.com as a hardcover here; a paperback here; and as a Kindle book here.