How to Defeat or Deter Insurance Fraud 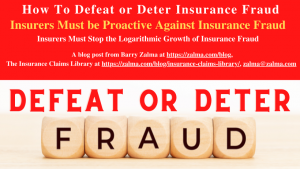 Insurance companies must stop the logarithmic growth of insurance fraud

Fraudsters take more money every year from insurance buyers. The Coalition Against Insurance Fraud recently revised its estimates from $80 billion a year to announce that insurance fraud takes over $308 billion a year from the insurance industry. The US Department of Justice, working with various federal law enforcement agencies, has taken an active role in investigating, prosecuting and convicting those who defraud US health programs and federally funded insurance such as flood insurance and crop insurance. Still, the arrests and prosecutions that do occur make only a small dent in the amount of money stolen from private and federally funded insurance.

Because no one really knows how much is taken from insurance companies and federal programs—because most succeed—the best estimates, such as that made by the Coalition Against Insurance Fraud, are nothing more than an educated guess. People actively involved in the investigation of insurance fraud believe that the more accurate estimate is an amount equivalent to 10% to 30% of premium collected.

As the property and casualty insurance industry collected $394.8 billion in the first half of 2021 compared to $362.3 billion for the same period in 2020, six-month fraud took $39.48 billion to $118.44 billion annually for the small part of the insurance industry. [https://content.naic.org/sites/default/files/inline-files/Property-Casualty-and-Title-Insurance-Industries-2021-Mid-Year-Report.pdf] If the trend continues, the amount stolen from the property and casualty insurance industry — a small fraction of the coalition’s number — for the year would nearly double to $80 billion to $220 billion.

The insurance companies have good reason to complain. They are generally ignored by police authorities when reporting the crime. When insurance criminals are caught in the act, they are rarely caught, even less often prosecuted and almost never punished.

The California Department of Insurance, like similar entities across the country, mandates that insurers fund and staff a Special Investigative Unit (SIU) to investigate and report to the state potential insurance fraud and maintain a detailed anti-fraud program. The California Department of Insurance audits insurance companies regularly to make sure that each insurer is working hard to investigate and prosecute the crime of insurance fraud and punish those the Department believes are not working seriously to defeat fraud.

At the same time, the same insurance department penalizes insurers for not paying claims promptly or for not treating insureds or claimants fairly. Courts and juries will often assess punitive and exemplary damages against insurers who accuse their insureds of fraud while looking with 20/20 hindsight at the SIU investigation.

Similar companies in the financial sector, which are also regularly exposed to fraud and other crimes, are not taxed or forced to investigate crimes committed against them. No one is asking Bank of America or Wells Fargo or Chase to pay to prosecute embezzlers or bank robbers. No one is demanding that Southland Corporation pay to prosecute people who have 7-11 stores. No regulatory authority requires stockbrokers to investigate money laundering or fraudulent transactions. The imposition on the insurance industry – and the resulting cost passed on to the insurance consumer – is unique.

Insurance companies are treated differently than any other business in the United States.

George Orwell was right when, to paraphrase, he had a character in his novel “Animal Farm” say that “all businesses are equal, some are more equal than others.”

It is clear that insurance companies are less equal when it comes to crimes committed against them than other companies.

Are insurance companies getting their money’s worth from fighting fraud?

Prosecutions and investigations of insurance fraud are anemic.

I have heard the following excuses from prosecutors presented with insurance fraud cases:

What can insurers do to change the statistics?

Lobby to change the system so that:

Work within the system we have:

When the Fraud Unit refers a case to a prosecutor, the prosecutor’s identity determines.

Enough letters, enough complaints and insurance fraud will finally be recognized by prosecutors as a serious crime.

It is also the duty of all involved in the effort to prevent insurance fraud to:

To defeat or deter insurance fraud, it must be prosecuted. To get it prosecuted, the insurer has to do the work because local police authorities or prosecutors will not deal with the fraud, unless it involves a serious violent crime.

The orphan in the criminal justice system

Insurance fraud is an orphan of the criminal justice system and will never be defeated until the public and prosecutors recognize that insurance fraud is a serious problem that affects their own financial situation.

It’s time for insurers to stop complaining and do the work necessary to defeat this metastasizing crime before its growth eats away at any opportunity for insurers—and their shareholders—to make a profit.

Everyone involved in the insurance industry and everyone who buys insurance needs to make it clear that they are angry about what is happening to their insurance premium dollars. When I, and anyone who has ever bought insurance, hears that $300 out of every $1,000 we pay in premiums goes to a criminal, we should all want to scream out the window, like the character on “Network”: “I I’m crazy like hell, and I’m not going to take this anymore!”