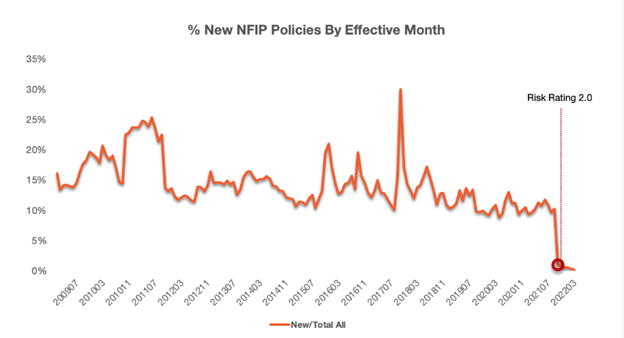 This post is part of a series sponsored by SWBC.

The Federal Emergency Management Agency (FEMA) is responsible for identifying high-risk flood zones, which are then used to designate areas where homeowners with federally backed mortgages must obtain flood insurance.

The purpose of Risk Rating 2.0’s broader premise to make prices more actuarially correct is to make insurance premiums more closely and directly correlated to the actual risk of an individual property and to add solvency to the government program.

For example, under the previous rating system, there was an abundance of high-risk and high-risk waterfront properties for which property owners paid a relatively low premium on their NFIP policies because rates were subsidized by lower-risk inland flood properties. FEMA̵

7;s original rating method didn’t take things like this into account. RR2.0 will use data modeling that does that.

In the updated system, many of these old “grandfathering” rules and artificial subsidies that the NFIP provided prior to RR2.0 have been removed, making private flood insurance much more competitive.

In this blog post, we’ll discuss how FEMA’s new risk rating system may affect your insured’s need for more primary flood insurance options and give you tips to share with them to ensure their property is adequately covered.

How will FEMA’s new Risk Rating 2.0 affect my customers’ coverage and rates?

In a recent conversation hosted by the University of Pennsylvania’s Wharton Risk Center, flood risk analysis experts explored how RR 2.0 could affect coverage for millions of policyholders:

“While homes with existing insurance are protected from sudden price increases with a legal cap of 18% per year on increases, the law does nothing to protect currently uninsured homes. Due to a variety of systemic challenges around encouraging NFIP participation, this unfortunately for a majority of homes at high flood risk.

An even more worrying aspect of the low take-up rate is that it appears to be more pronounced for low-income households. This is intuitive because these households are less likely to be able to afford flood insurance in the first place. The median income for uninsured in FEMA-established flood zones was found to be just $40,000, just over half of the $77,000 median income for policyholders in flood zones. The unlimited rate hikes for uninsured homes will almost certainly exacerbate this equity problem and also concentrate market value shocks in communities least able to absorb them.

One fear that unlimited RR 2.0 rates would be unaffordable for new insurance applicants (and those who have previously lapsed on their policies because they could not afford them) is unfortunately becoming a reality, as evidenced by the alarming decline in the number of new NFIPs -policies were created after Phase 1 of RR 2.0 began on 2021-10-01.

This trend has continued into 2022. The chart below shows the percentage of new policies created at the new rates, compared to renewals benefiting from coverage that delayed the increases until 01/01/2022. It seems reasonable to conclude from this analysis that the uncapped RR 2.0 rates are significantly higher than the old rates, further discouraging the use of flood insurance by homeowners.”

As you can see, new insurance sales for NFIP are down compared to pre-RR2.0, but private flood insurance is growing rapidly. One reason for this is that each insurer is willing to take an independent view of risk and these views will often vary to some extent.

As your customers’ trusted insurance agent, they trust you to provide sound advice to help protect their homes. For example, are they aware that flood damage is not covered by home insurance? This is crucial, because, according to FEMA, just one inch of flood water in their home can result in over $25,000 in property damage.

If your clients are concerned about rate increases under FEMA’s new risk rating system, they may want to explore private flood insurance options.

Here are some highlights of private flood insurance that can help them understand the differences:

Shorter waiting times: NFIP coverage usually takes 30 days to take effect, but with some private insurance companies, coverage can be effective in less than a week.

Additional flood relief: If your client has to move temporarily, private insurance can provide short-term accommodation. Depending on the policy, they can potentially purchase coverage for items or areas not covered by the NFIP.

Hopefully, your customers will never need to use their flood insurance – but it’s always best to make sure they have adequate coverage in case disaster strikes.

SWBC’s flood insurance coverage goes beyond the standard coverage limits offered by the NFIP. The program also covers living expense funding to help the insured through the transition process, which is something the NFIP does not offer.

In addition, SWBC is rapidly expanding coverage to help agents access new private flood insurance options for their clients so they can offer direct alternatives to NFIP.