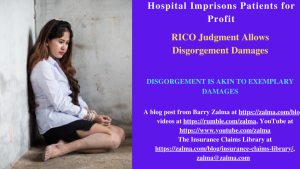 DISGORGEMENT IS EQUAL TO EXEMPLARY DAMAGES

When the nurse returned, the Creels said they were leaving because they did not like the treatment plans BHB had offered. The nurse informed the Creels that they were not allowed to leave because the BHB had “left an emergency order for [Diane’s] detention” and Diane would be placed in 72-hour detention. Creels then realized that BHB’s healthcare staff had locked both the door at the front of the building and the door to the intake room. Diane was taken to the psychiatric unit against her will. BHB did not allow Lynn to visit Diane in person. During all this time, neither Lynn nor Diane ever saw the order for her detention or even a piece of paperwork.

The plan underlying Creel’s experience began with Dr. Yupo Jesse Chang’s business (“Chang”), a family physician who has spent much of his career managing other medical practices. As Chang’s only notary, Yao kept a detailed notary book. The doctor who recommended a commitment for a patient signed the notarized documents – but the doctor was never physically in front of Yao, the notary public, when he or she signed the document.

The notarial documents reveal that in just three days between August 6 and August 10, 2017, a psychiatrist employed by BHB signed applications for the involuntary commitment of twelve different patients.

Twelve plaintiffs sued twenty-two defendants, alleging various causes of action based on their involuntary detention and stay at BHB. The jury found that the defendants, (1) were employees or associates of a RICO enterprise (2) had participated, either directly or indirectly, in the management of the enterprise’s affairs, and (3) had participated through a pattern of racketeering activity. The jury assessed plaintiffs’ damages at $300,000.00. The jury also found that all defendants conspired together to violate RICO.

Specifically, the court affirmed the jury’s verdict against defendants for RICO and RICO violations and now deals with disgorgement.

Plaintiffs have long pleaded and disclosed a claim for equitable estoppel in this case. The evidence attributed to equitable estoppel mostly involves the medical records that Yao falsely certified. In January 2017 alone, 276 documented requests for involuntary patient commitments were sent through one of Chang’s companies.

The defendants have not presented any evidence to suggest that they would change their business after the trial. Despite having to pay back Medicare and private insurance companies for incorrect billing, Chang still conducted his business affairs the same way.

CONCLUSIONS OF THE LAW

The remedy of ill-gotten gains is closely analogous to the equitable remedy of exemplary damages, as the main purpose is not only to punish the wrongful parties for conspiring to make illegal gains without conveying a strong message, to the conspirators and to third parties . that there is an additional barrier to engaging in such prohibited conduct.

The court found that disgorgement in this case is properly sought to “prevent and restrain” the defendant from continuing the unlawful conduct. The conduct that led to this trial was extreme. As previously discussed, in calendar year 2017 alone, hospitals that contracted with Chang filed 3,955 applications “to hold people in psychiatric hospitals against their will.” Chang and Yao were aware that this gross activity was illegal.

An award to restrain the defendants’ ill-gotten gains will serve to deter and limit future illegal conduct. Additionally, the court found that the jury awarded disgorgement for the purpose of preventing and limiting defendant’s future conduct.

Before the jury deliberated, plaintiffs’ most aggressive discharge request was for the jury to multiply $75 by the number of arrest warrants in Yao’s 2017 notary public records (3,955). In theory, this would result in a sum of just under $300,000. However, it is inexplicable that the jury awarded more than four times as much – presumably because it was outraged by the defendants’ conduct.

The court acknowledged that the defendants may well have secured ill-gotten gains equal to or in excess of the $1,350,500 awarded by the jury. But there is no evidence of profits to support such an award. While the court agreed with the plaintiffs that “[t]here was overwhelming evidence of interactions and communication between [D]efendants showing a common purpose to defraud,” that is not enough.

In order to limit the defendants’ future conduct, the court multiplied the cost of a telemedicine visit by Yao’s 3,955 notary public from 2017 to calculate the defendants’ profits causally related to their complex enterprise. For each telemedicine visit involving involuntary detention, Chang received $75, which consists of a $45 base fee, a $5 patient fee, and a $25 fee. By multiplying $75 by 3,955, the court found that the total profit equals $296,625.

Plaintiffs presented no evidence of any other profits obtained by defendants from unlawful conduct that violated RICO that would support a greater award of disgorgement. For all of these reasons, the Court concludes that Plaintiffs are entitled to recover from Defendants an equitable disgorgement of profits in the amount of $296,625.

The conduct of the BHB and the doctors and nurses in this system was extremely unsavory and used the law to kidnap patients for profit. The disgorgement was a necessary adjunct to the RICO damages to deter future conduct. Because these scofflaws billed Medicare and insurance companies for the purported treatment—even though it was reimbursed to the insurance companies and the government—they committed a fraud that was more than a preponderance of evidence. Because, as the court explained, the defendants are still restraining people against their will, the court should have referred the defendants to the Department of Justice for prosecution.

He can be reached at http://www.zalma.com and zalma@zalma.com. Subscribe and receive videos limited to Excellence in Claims Handling subscribers at locals.com https://zalmaoninsurance.locals.com/subscribe. Subscribe to Excellence in Claims Handling at https://barryzalma.substack.com/welcome. Now available Barry Zalma’s newest book, Bad faith damages, available here. The new book is available as a Kindle book, paperback or as a hardcover.