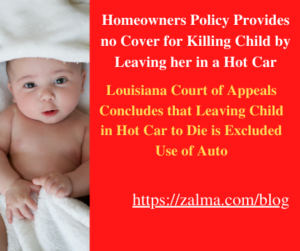 This lawsuit arises from the tragic death of two-year-old Avril Sanabria (“Avril”), who remained secured in the harness of a car seat at the back of a vehicle parked in the driveway at 494 Carolyn Drive in Destrehan, Louisiana for over six hours, when the outside temperature was ninety-seven degrees Fahrenheit.

Suly Sanabria (“Suly”), the deceased’s grandmother, fetched her daughter, Lezly Sanabria (“Lezly”) and her two-year-old granddaughter and Lezly’s niece, Avril Sanabria (“Avril”). Avril sat in a car seat with the harness secured. Suly then drove Lezly and Avril to her home. Suly parked her vehicle in the driveway and went into her home alone, leaving Lezly, Jonathon and Avril by the car. According to Suly, she could not fasten or loosen Avril in her car seat due to disabling arthritis in her hands.

Neither Suly nor Lezly removed Avril from the vehicle. More than six hours later, Suly and Lezly realized that neither of them had Avril. When she returned to her vehicle, Suly discovered that Avril was still in the vehicle. As a result, Avril suffered injuries to her mind and body that led to her death.

UPC filed a claim for summary judgment in the matter of insurance coverage. UPC relied on an exclusion of liability for motor vehicles in the homeowners’ policy, claiming that Avril Sanabria’s death arose “from occupancy”, “use” and / or “relief” of a motor vehicle, as well as “failure to monitor and / or negligent monitoring” of the child of Suly and Lezly who involved a motor vehicle, which excluded coverage for any of Ms. Calderon’s injuries.

The trial court ruled that the homeowners’ policy issued by UPC provided compensation for Avril’s death and rejected UPC’s claim for summary judgment.

UPC argued that the trial court erred in finding that UPC’s homeowners’ policy provides coverage for Avril’s death when the language of the policy unequivocally excludes coverage for an incident arising from:

Whether an insurance provides or excludes coverage is a dispute that can be properly resolved within the framework of a claim for a ruling. An insurer has the burden of proving that a loss falls within an exemption from the insurance. In addition, an exception clause in an insurance policy must be interpreted strictly. However, an insurance policy, including its exclusions, should not be interpreted in an unreasonable or strenuous manner in order to extend or limit its provisions beyond what is reasonably considered by its terms or to reach an absurd conclusion.

The Court of Appeal found that the exemption from motor vehicle liability according to the homeowners’ policy is unambiguous and should be applied as written.

The exclusion of motor vehicle liability from homeowners’ policies works to largely exclude coverage for bodily injury and property damage “arising from occupancy, use, unloading and failure to supervise or negligent supervision.”

Occurs out of use

To conclude that an injury occurred while using the car, a court must find the vehicle essential to the theory of liability. In this regard, a court should apply a common sense method to determine whether the duty that the insured is in breach derives from the “use” of the car under the language of insurance.

As a guardian, Lezly had a general duty to supervise and protect Avril. The record states that Lezly was often the babysitter for Avril, usually three days a week. On the date of Avril’s tragic death, Lezy testified that Avril was in her care and would spend the night in her apartment.

In addition to its general duty, the court found that Lezly, as guardian, also had a specific obligation to protect Avril from the risks of harm that may arise from the “use” of a motor vehicle by children left in or with access to the vehicle.

The specific obligation in relation to the specific obligation of parents or guardians, “common sense”, was applicable to determine whether the operation or use of a motor vehicle is decisive for the alleged breach of the specific obligation. The alleged behavior was that Avril remained secured in her child car seat in the rear of Suly’s vehicle and was then left unattended in the vehicle, which was unventilated and trapped in heat, for several hours, which led to Avril receiving injuries that caused her death. Based on the record, it is clear that Lezly has violated both his general duty to supervise and his specific duty to protect Avril from the danger associated with abandoning a minor child in a vehicle under extreme heat conditions.

Suly violated her duty as a host driver by not protecting her underage guest passenger, Avril, from ending up in a dangerous situation – being abandoned in a hot vehicle.

Both Suly’s and Lezly’s negligence was a legal cause of the accident in question when Suly and Lezly failed to exercise the requisite degree of care and caution against Avril in the specific circumstances of this case.

Use of the vehicle in this case is an essential part of the liability theory – Lezly’s and Suly’s failure to monitor or negligent monitoring of Avril involved use of the motor vehicle.

Louisiana case law has given a broad interpretation of the words “derived from … the use of the car.” The totality of the circumstances surrounding or leading to an accident should be investigated to determine if the accident arose from the “use” of the car. Avril’s damage occurred while the vehicle was being used for a purpose inherent in the vehicle, that is, to transport people or things from one place to another.

Although the vehicle was no longer used when Avril was left unattended, it is well established that you do not have to drive or drive a vehicle to be able to use it. The vehicle was the catalyst for the heat chamber-like conditions that arose that may not have occurred without the vehicle.

The simple meaning of “occupancy” refers to “the act, permission or permission to possess, own or reside in or on something.” Black’s Law Dictionary, 10th edition. 2014. Pursuant to the usual, simple and ordinary meaning of the term in question, “occupied” or “in” Avril the vehicle according to the facts in this case, and that the exemption from motor vehicle liability does not create any ambiguity as to the coverage or lack of coverage referred to in the homeowner’s policy.

By applying common sense to the present case, Lezly’s and Suly’s negligence in failing to unload Avril from the vehicle led to Avril receiving fatal injuries after being left unattended in the back of the vehicle for several hours. Consequently, the exemption from liability for motor vehicles was triggered.

Occurs due to failure to monitor / negligent monitoring

Although the court was empathetic towards the parties regarding the tragic event that led to Avril’s death, it could not say that the policy of this homeowner and the exclusion in question would lead to absurd consequences or that it would be contrary to public policy.

The Louisiana Court of Appeal concluded, logically and with both legal and common sense, that leaving an infant strapped to a hot vehicle sufficiently to cause the child’s death was clearly a negligent use of a car. Because the claim against a homeowner’s policy specifically excluded damages caused by or arising from the use of a car, there was no possibility of coverage under the homeowner policy.

Low-code and no-code solutions for insurance companies (and others).

Diversity in the management of financial services up only slightly: GAO