HIT IN CHARGES DEADLY FOR TARGET 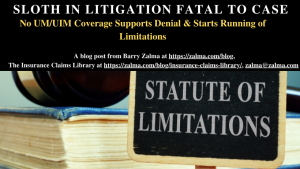 The statute of limitations ran from denial of claim

IN Glenna L. Novak And Estate Of Jeffery Leonard Novak, A/K/A Estate Of Jeffery L. Novak By And Through Glenna L. Novak, Executrix v. Mutual Benefit Insurance Company, no. 1592 MDA 2021, no. J-S23016-22, Superior Court of Pennsylvania (Oct. 14, 2022) when the plaintiff’s attorney admitted that a letter was a denial of a UM/UIM claim that the denial began to run the statute of limitations.

In June 2011, Jeffrey Leonard Novak (“Decedent”) was riding a motorcycle when a vehicle driven by Roy E. Wright made a left turn across Decedent’s lane, causing the motorcycle to strike the vehicle. The deceased was thrown from his motorcycle and sustained injuries, including severe head trauma, which resulted in death.

The appellants sought recovery from Wright, who had insurance through Progressive Specialty Insurance Company (“PSIG”). Wright’s policy had a $50,000 bodily injury limit, which PSIG submitted. Appellants also filed a claim for underinsured motorist (“UIM”) coverage under Decedent’s motorcycle policy (“Motorcycle Policy”). The motorcycle policy was issued by Progressive Advanced Insurance Company (“PAIC”). PAIC informed appellants that Decedent had declined UIM coverage. Appellants sued, claiming the UIM denial was ineffective, and they eventually reached an agreement to settle the lawsuit for $20,000.

The appellants’ counsel wrote to MBIC, which had issued insurance on two of the appellants’ other vehicles, a car and a lorry, asking for consent to settle the two claims. In a letter dated October 3, 2012, MBIC stated that the motorcycle Decedent was riding at the time of the accident was not insured by MBIC. Therefore, MBIC explained, UIM coverage was not available under its policy and its consent was not required for termination.

Appellant later filed a claim with MBIC for UIM coverage under the personal automobile policy. MBIC denied UIM coverage, stating that it had previously denied coverage in the October 2012 letter, when it explained that its consent was unnecessary to the settlements. Plaintiffs sued in February 2018 (six years after the initial denial), and they filed a complaint in May 2019. They alleged breach of contract, sought declaratory judgment, and sought damages for bad faith.

MBIC ultimately filed a motion for summary judgment, arguing, in part, that appellants’ claims were barred by the statute of limitations.

Plaintiffs argue that the accrual date of the action could not have occurred prior to August 2017, when they filed a UIM claim with MBIC. The appellants argued that an unsolicited opinion or observation by an insurer that it may or may not have coverage applicable to a particular matter is different from an insurer dealing with a claim confirmed and submitted by an insured to the insurer for action and denying that the insured the specific requested benefits.

It cannot be properly disputed that MBIC denied coverage of the subject accident by letter dated October 3, 2012. Although the appellants had not yet made a claim under their MBIC policy, a plain reading of the 2012 letter makes it clear that MBIC denied coverage for items accident. In order to file a breach of contract action in a timely manner, the appellants should have brought the action no later than October 3, 2016, which they did not.

Therefore, the Court of Appeals concluded that appellants’ claims were untimely, and summary judgment should be granted in favor of MBIC on all claims.

The October letter stated that UIM coverage is not available under the policy. Even appellants’ counsel admitted that upon receiving the letter in 2012, he interpreted the letter as a denial of coverage. Therefore, the record supported the finding of a waiver of counsel and a manifest failure to timely file suit, defeating the suit.

In admitting that there was a denial in 2012 and the suit was not filed until 2018, the attorney for the plaintiff has conceded that the statute of limitations applied and the suit was untimely presumably because he agreed that there was no coverage under the MBIC policy. When a plaintiff has a reasonable cause of action against an insurer, there is no excuse for failing to bring suit within a four-year statute of limitations.