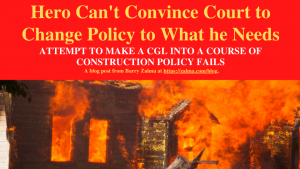 THE COURT CAN’T CHANGE AN APPLE INTO AN AMERICAN

On December 6, 2017, a fire destroyed the residence in Belle Chasse, Louisiana. The residence was under construction, but largely completed at the time. IN Numa C. Hero & Son, LLP through its general partner George Allen Hero v. Brit UW Limited And Erwin Insurance Agency, Inc.., no. 2022-CA-0405, Court of Appeals of Louisiana, Fourth Circuit (Dec. 21, 2022), the appellate court dismissed Hero’s property damage claim even though it was not described on the policy declarations page.

The property was owned by Numa C. Hero & Son, LLP, through its general partner, George Allen Hero (“Hero”). Hero built the residence on the aforementioned property, which upon completion was to be purchased by his daughter and son-in-law, Victoria and John Dillman.

The property coverage declarations do not describe any premises, buildings or structures in Belle Chasse or Plaquemines Parish, including the subject property.

On June 4, 2018, Hero sued for breach of contract and, alternatively, for malpractice against Brit UW and Erwin claiming property damaged by the fire at 431 Planters Canal Road. Hero argued that the house, which was then under construction, was covered by the 4S policy, and if the insurance did not provide coverage, its insurance agent, Erwin, was liable for malpractice for failing to secure such insurance coverage.

Although previous attempts at summary judgment failed, the defendants succeeded in their fourth attempt. They argued that there was no commercial property coverage under the 4S policy for Hero’s claim for fire damage to the building under construction. In their motion for summary judgment, the defendants were able to make a prima facie case that there was no property damage coverage under the 4S policy for the structure destroyed by fire

The summary judgment procedure is designed to ensure a fair, speedy and inexpensive determination of each action. The burden is on the opposing party to provide factual evidence sufficient to establish the existence of a genuine issue of material fact or that the movant is not entitled to judgment as a matter of law. A previous rejection of a summary judgment does not preclude a similar, or even the same claim, being granted later in the case.

The party seeking insurance coverage bears the burden of proving not only relevant, existing insurance, but also coverage under that insurance. The insurance contract in the buildings and personal property coverage form states that:

Declarations section. Whereas the lot designation for 431 Planters Canal Road, listed as Lot 44 on Form 0033, is not referred to in the “Description of Premises” or “Coverages Provided” sections; there is no indication of any “building” on that lot; there is no limit to the insurance shown for that property or structure; and there is no premium charged for coverage.

Arguments of counsel, which include memoranda filed in support of or in opposition to a motion for summary judgment, are not evidence, no matter how artful and persuasive. Likewise, advice and intelligence arguments, however artful, are not sufficient to raise a genuine issue of material fact.

Evidence, such as affidavits and testimony, is admissible to determine whether a policy is in effect or whether there is a question of fact as to the applicability of a provision of a policy. The trial court’s review of evidence in support of a motion for summary judgment is also an evidentiary determination subject to the abuse of discretion standard of review.

The deposition testimony and affidavit offered in support of defendants’ motion were offered to show that no policy covered the home under construction and that neither Hero nor its agents ever requested such coverage. Hero’s argument that it expected or believed it had insurance coverage does not support a finding of ambiguity, nor is it evidence that coverage was ordered or obtained. Insurance coverage is determined based on the written instrument, not the expectations of the parties. That Hero may not have known that a different type of insurance was required does not mean that there is coverage under this policy, it merely supports an action against Hero’s broker. As such, there is no ambiguity in the insurance contract.

All of the issues raised in this appeal were also raised by Hero in its motion for new trial; Hero asks the court to take a different view of the factual evidence, the deposition testimony, and its reading of the policy. Hero does not show that the trial court abused its discretion in any way. Accordingly, there was no abuse of discretion when the trial court refused to grant Hero a new trial.

The judgment of the trial court granting summary judgment in favor of the Brit UW defendants and against the Hero plaintiffs is affirmed.

A court will not change an orange to an apple because of a legal action, nor will it change an insurance policy covering the insured’s liability to third parties to a construction policy. If such a policy was ordered, Hero could have a case against the agent. If not, the Hero plaintiffs received the coverage they ordered and the case against the agent will be difficult to prove.