Help: My building is falling down 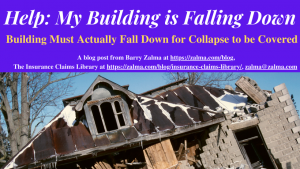 The Windcrest Owners Association filed a lawsuit against Allstate Insurance after the company denied a property damage claim to a building in its condominium development. Allstate moved for summary judgment, arguing that the property damage was not covered as a “collapse” and was excluded from coverage because it was due to faulty construction and maintenance. The district court granted summary judgment and dismissed Windcrest’s claims.

IN Windcrest Owners Association, a non-profit corporation of Washington v. Allstate Insurance Company, an Illinois corporation, State Farm Fire And Casualty Company, an Illinois corporation, No. 82836-3-I, Court of Appeals of Washington, Division 1 (Dec. 12, 2022) Windcrest sought payment to repair a building in dire distress resulting from wear and tear and deficient construction under a “collapse” coverage . The Court of Appeals read the entire policy and applied its language to the facts presented by construction experts.

Windcrest Condominiums, consisting of 15 units in two buildings, was completed in 1995. Allstate provided commercial property insurance from November 2002 through 2017.

In October 2018, Windcrest notified Allstate of a claim for damages based on a structural report prepared by Dibble Engineers. The report noted decay consistent with a significant deterioration in the structural integrity of one of the buildings. Specifically, it noted, “The ability of the building’s lateral and gravity-resisting systems is compromised by decay that has been concealed by the exterior siding.”

Allstate, conducting a good faith investigation of the claim, retained construction consultants from Madsen, Kneppers & Associates, Inc. (MKA) to conduct an inspection and evaluation of the cause of the damage at Windcrest. The MKA concluded that there were sites with noted decay of structural components but no evidence of collapse “defined as a sudden fall or cave-in,” which is required for coverage under Allstate’s policy.

Determining whether coverage is available is a two-step process.

Windcrest made a claim under the Allstate policy. The coverage provided during an additional coverage collapse applies only to an abrupt collapse as described and limited.

In addition to the lack of suddenness, Windcrest failed to provide evidence that the building or parts of the building fell, fell into pieces, or buried itself. Rather, it was still standing and occupied. Additionally, the MKA study noted that there was damage to the buildings and that “there is no evidence to suggest that any part of the building is currently . . . in a state of collapse, defined as a sudden fall or collapse.” Indeed, a Windcrest resident and board member confirmed that no part of the building had collapsed or suddenly collapsed.

Windcrest provided no evidence that the structures were no longer habitable. A Windcrest resident and board member confirmed that Dibble never informed the board that the buildings were unsafe or unfit for habitation. The Court of Appeal concluded that the Windcrest buildings have not collapsed such that they can no longer be used for their intended purpose. Additionally, the appeals court noted that Windcrest had not demonstrated a collapse as defined by the Allstate policy and that the collapse coverage does not apply.

The evidence of both Allstate and Windcrest showed that defective construction and maintenance initiated the chain of causation that resulted in the loss. Allstate submitted both a report and deposition testimony of expert David VanDerostyne to support an exclusion of coverage due to defective construction. The report ultimately concluded that decay and deterioration occurred over an extended number of years due to “defective original construction combined with a lack of repairs and/or maintenance” in addition to a lack of collapse.

As the evidence did not show any sudden or sudden fall of any part of a building so that it could not be used for its intended purpose. As a result, the collapse insurance cover did not apply. Based on the evidence before the district court, the damage to the condominium was caused by incorrect construction and maintenance.

The Allstate policy expressly excluded coverage for defective construction and maintenance, as well as for any loss initiated by these excluded perils. Therefore, the Court of Appeals concluded that the district court properly granted summary judgment for Allstate and dismissed Windcrest’s claims.