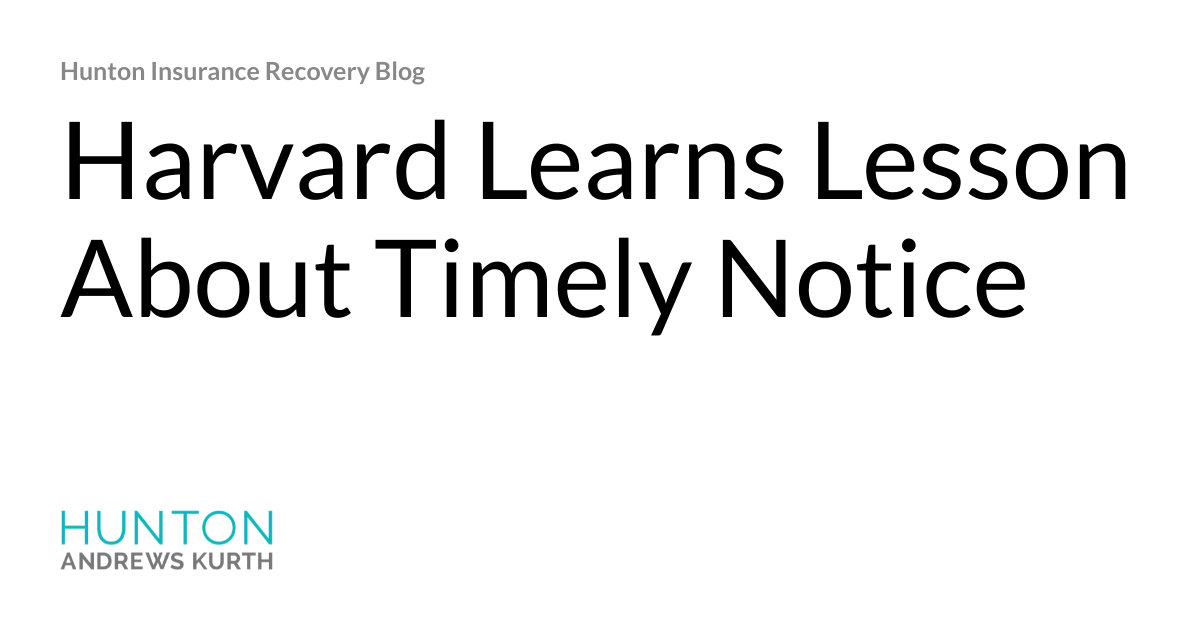 As Harvard prepares to defend its admissions policies to the Supreme Court, one of its insurers continues to argue that a technicality prevents Harvard from recovering $15 million to cover its defense costs under its policies.

Last month we discussed an insurance coverage dispute between Harvard College and Zurich American Insurance Company. The dispute stems from Zurich’s refusal to cover a 2014 lawsuit an affirmative action group filed against Harvard, claiming the university’s admissions policy violated Title VI of the Civil Rights Act. Since the lawsuit was filed, Harvard has defended its admissions policy through the trial and appellate court systems, an effort that has cost the university more than $25 million.

Zurich refuses to give Harvard the $1

In August, Zurich requested summary judgment, arguing that the issue is simple: No timely notice, no coverage.

More specifically, Zurich alleges that Harvard missed the notice deadline by more than a year, and that mistake bars coverage entirely. Zurich’s excess policy is a “claims made and reported policy”, meaning that it extends coverage only to claims that are both directed at the policyholder (Harvard) and reported to the insurer (Zurich) during the policy period or within a 90-day period thereafter. According to Zurich, the only fact the court needs to take into account is that Harvard missed the termination deadline.

Harvard, on the other hand, argues that Zurich is being too literal and is playing a “cat and mouse” game to avoid paying exactly what it promised when it sold Harvard the excess insurance. According to Harvard, Zurich knew about the affirmative action lawsuit even though Harvard had not formally notified, would not have done anything differently if Harvard had notified earlier, and should not be allowed to rely on a technicality to avoid paying. In Harvard’s words, “the notice requirement is not an escape hatch for insurers to avoid liability to policyholders due to technical deficiencies.”

Harvard’s argument makes sense. Why should an insurance company that actually knows what’s going on be allowed to take advantage of a messaging technology? Unfortunately, the stark reality is that many, if not most, courts will strictly enforce notice requirements even where the purpose of the provision—to inform the insurer of the requirement—was met. So, Harvard’s dispute serves as a lesson for all policyholders: Don’t hit snooze on your notice obligation. Policyholders should carefully review their policies and give timely notice of any potential claims. Better to oversubscribe your insurance companies than get caught in a game of cat and mouse.