Guilty of using stolen prescription plate to get oxycodone 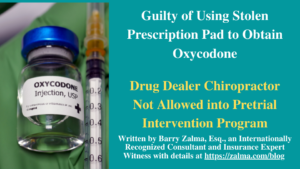 IN State Of New Jersey v. Jason Mittleman, No. A-0925-20, Superior Court of New Jersey, Appellate Division (June 22, 2022), the chiropractor appealed the refusal to allow him to participate in the PTI program.

Mittleman is a chiropractor. In 2017, he worked at the Denville Medical and Sports Rehabilitation Center where he stole another doctor’s prescription. Over the next twenty-two months, Mittleman submitted false prescriptions to receive thousands of oxycodone pills.

Mittleman’s theft and fraud were discovered in 2019. During the subsequent police investigation, Mittleman admitted that he stole the prescription sign, fraudulently filled in many prescriptions and used these prescriptions to get oxycodone.

Mittleman applied for admission to the PTI program. Morris County’s prosecutor’s office rejected his application, stating the reasons for the decision. A Deputy Prosecutor examined the seventeen factors listed in the PTI Charter and found ten aggravating factors, considered several mitigating factors, but determined that Mittleman was not a suitable candidate for the PTI program.

A judge in the law department heard arguments about Mittleman’s motion, rejected the motion and stated the reason for this decision in the minutes. On the same day, the judge of the legal department signed an order denying Mittleman’s motion to force his entry into the PTI program.

The following month, Mittleman pleaded guilty to third-degree insurance fraud. In accordance with the agreement, Mittleman was sentenced to one year of probation with the condition that he surrender his chiropractor license during the probationary period. The other charges against Mittleman were dismissed.

Mittleman appealed from the order, which denied his motion to force his entry into the PTI program. Mittleman’s arguments were rejected because they were not supported by the minutes.

Prosecutors are given ample room for discretion to decide whether anyone charged, including Mittleman, should be diverted to PTI instead of prosecuted. The scope of judicial review is severely limited by the Charter.

The prosecutor also considered Mittleman’s use of the oxycodone. In that regard, the prosecutor noted that Mittleman claimed that he had stopped using oxycodone voluntarily and therefore the state noted that there was no clear evidence of an addiction that could be better treated through rehabilitation programs such as PTI.

Records found during the criminal investigation showed that Mittleman received fraudulent prescriptions for oxycodone from April 2017 to February 2019. During the same period, he treated patients. Consequently, there is no pure speculation that Mittleman’s unregulated use of oxycodone could have posed a risk to his patients.

The Court of Appeal rejected Mittleman’s arguments concerning factual errors by the prosecutor because these arguments were not supported by the minutes and upheld the district court’s decision.

For a caregiver to steal a prescription note and obtain for his personal use and distribute oxycodone illegally to others to seek admission to the PTI program would have allowed him to avoid his recognized criminal behavior. That he appealed the denial after having been admitted guilty of only one charge and only sentenced to probation was unscrupulous. He should have been sentenced to prison for such gross misconduct and abuse of his profession.