General Contractor Not a lawyer 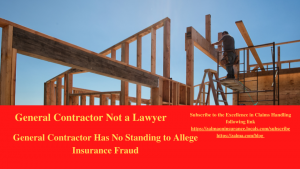 In an amended complaint, Hall alleged breach of fiduciary duty, insurance license violations, bank fraud, insurance fraud, breach of the implied covenant of good faith and fair dealing, harassment and unfair and deceptive trade practices. The defendants moved to dismiss as amended. Hall moved to amend his complaint to add an additional cause of action and an additional defendant, and an objection to the defendants’ motion to dismiss. The district court granted the defendants’ motion to dismiss on July 29, 2021.

In considering a motion to dismiss, the court must construe the allegations liberally and the court should not dismiss the complaint unless it appears beyond a reasonable doubt that the plaintiff could prove no set of facts in support of his claim that would entitle him to relief.

The caption of the plaintiff’s complaint indicates that he brought suit for breach of fiduciary duty, insurance license violations, bank fraud, insurance fraud, breach of implied covenants of good faith and fair dealing, harassment, and unfair and deceptive trade practices. The suit indicates only that Hall is questioning the propriety of the supplier’s compliance bond as required by the Master Deportment Agreement. Hall failed to state a claim upon which relief may be granted under any legal theory.

For a court to have substantive jurisdiction to hear a claim, the party who brought the action must have standing. Standing means that the party has a sufficient stake in an otherwise legal dispute to obtain a legal resolution of that dispute. Any claim must be brought in the name of the real party in interest. A real stakeholder is a party who benefits or is harmed by the judgment in the case. Lack of standing may be contested by motion to dismiss for failure to state a claim upon which relief may be granted.

The court noted that Hall appeared to argue that the amended and restated master declaration and development plan for Brunswick Plantation was unenforceable because it is ambiguous and is a restrictive covenant on the property. The plaintiff does not own the property, nor does it have any protected legal interest in the property. He therefore lacked standing to bring this action.

In the alternative, the district court dismissed the plaintiff’s motions because the plaintiff lacked standing to bring the action on behalf of Eco Lakes. In North Carolina, a corporation must be represented by a duly admitted and licensed attorney and cannot proceed pro se.

The district court’s decision to dismiss the plaintiff’s complaint was upheld.

This case is an example of the abuse of a lawsuit by allegations of insurance fraud and bad faith that were unrelated to the issue at hand. To avoid paying a minimum bond of $5,000, Hall fled the arraignment, claiming he wanted to build a house, and charged the defendants with multiple torts and the crime of insurance fraud because they insisted he post bail. He had no position and was, if anything, trying to smear the defendants and get them to retain their counsel and defend this false allegation. The Court of Appeals refused to honor his plan and should have sanctioned him for bringing the case without standing.

It is best to purchase your own UM/UIM coverage