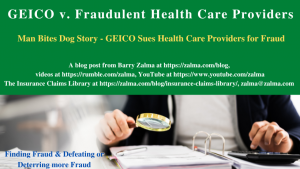 The State Employees Insurance Corporation, together with certain related companies (collectively, “GEICO”), brought this action. GEICO alleges that it has been the target of a no-fault insurance fraud scheme carried out by the thirty-eight individuals and entities named in the complaint and certain unidentified others. Most of the named defendants are healthcare professionals and a professional limited company (the “Healthcare Defendants”). The remaining defendants (the “Management Defendants”) are not health care professionals, but have “secretly and unlawfully owned, controlled and benefited financially from” the services provided by the health care defendants “in violation of New York law.”

In New York, an insurer must provide certain no-fault insurance benefits (“Personal Injury Protection” or “PIP Benefits”) to the individuals they insure. Under the no-fault insurance system, insurers must pay PIP benefits within 30 days of the claimant providing evidence of the claim. In arbitrations to recover no-fault benefits – which insurers must provide in their contracts, the process is an expedited, simplified affair that should work as quickly and efficiently as possible.

Operation of the alleged system

According to GEICO, around June 2019, the management defendants recruited the health care defendants to “serve as nominal or ‘paper’ owners of the professional health care business conducted in their names” in exchange for compensation. The Healthcare Defendants then worked at various clinics (the “Clinics”) throughout the New York area. The health care defendants treated patients referred to the clinics by personal injury attorneys or “through a network of individuals … who were paid by the management defendants for each insured they delivered.”] The medical defendants treated the insured as having significant injuries and health problems in order to maximize compensation from insurance companies, despite the fact that most were involved in “relatively minor accidents, to the extent that they were involved in any actual accidents at all.” The no-fault claims were submitted through 34 different professional practices, all operating under the professional licenses that belonged to the healthcare defendants.The claims were submitted through the 34 different entities, which is likely to reduce the amount of billing submitted through a single individual or entity or under a single tax identification number, thereby preventing GEICO from identifying the pattern of fraudulent charges Under this scheme, defendants submitted bills seeking more than $6.4 million in no-fault benefits There are more than $4.3 million in pending no-fault insurance claims that have been submitted to GEICO by Defendants.

Evidence of the alleged program

In support of its fraud claim, GEICO has submitted depositions from two of the health care defendants, Julia Kay and Eyriney Azer, who have settled with the company, and a chart, totaling more than 750 pages, of alleged fraudulent claims without errors that submitted by the Defendant. , which is only a “representative sample. The affidavits tell very similar stories of being hired by a woman named “Wilma,” presumably Wilma Tanglao, one of the management defendants. In their interviews, Wilma informed Kay and Azer that they would provide dry-needling motor vehicle accident patients at several Brooklyn clinics for an hourly wage It was only after the fact that both affiliates learned that someone — presumably Wilma and the other administrative defendants — had filed no-fault claims with GEICO and other insurance companies for dry -needling and examinations under their social security numbers, had opened PO boxes and bank accounts in their names, and had received checks issued to relatives from GEICO and other insurance companies.

A movant must show (1) irreparable harm without an injunction; and (2) either a likelihood of success on the merits, or a serious issue going to the merits so as to make them a just basis for trial, with a balance of difficulties tipping decidedly in favor of the plaintiff.

Courts in the District of New York have consistently found irreparable harm where there is concern about wasting time and resources in an arbitration with arbitration awards that may eventually be, at best, inconsistent with this court’s ruling, and at worst, essentially ineffective. Thus, when “an insurer must waste time defending multiple no-fault actions when the same proceedings could be resolved globally in a single, pending declaratory judgment,” courts regularly find irreparable harm. GEICO claims it is over 950 pending arbitration filed by the defendants, in addition to potentially hundreds more debt collection arbitrations and civil debt collection actions. Because at least some of the pending arbitrations and some of the potential arbitrations and state court proceedings involve the Bu Defendants, there is a risk of inconsistent judgments between these other proceedings and this one. If Defendants are no longer in business and permitted to prosecute pending collection proceedings, GEICO’s damages cannot be limited to inconsistent judgments or unnecessary expenditure of time and resources. Every dollar awarded to defendants in an AAA or state court collection proceeding may be permanently irrecoverable, even if GEICO ultimately prevails in this case. Because GEICO has shown the irreparable harm of inconsistent judgments and the potential inability to recover damages, GEICO has shown irreparable harm.

For a court to issue a preliminary injunction, the moving party must show either a likelihood of success on the merits, or sufficiently serious issues raised on the merits to make them a just basis for litigation and a balance of hardship decidedly tipped The GEICO Advantage. GEICO has demonstrated a serious issue that goes to the merits. GEICO seeks a declaratory judgment that the Defendants are not entitled to receive payment for any pending bills submitted to GEICO, an estimated $4.3 million in pending no-fault insurance claims.

The complaint discusses at least fifty examples of fraudulent no-fault claims and explains exactly how to determine that each claim is fraudulent. Given the extensive evidence of the overall scheme and the involvement of the Bu Defendants, the Court finds that there are serious issues of fact. Although the defendants are rightfully owed the compensation of the claim, the repayments will only be delayed and they will be paid later with interest. Thus, the court waived the tying requirement because the case involves public interest and the Bu defendants have not established any likelihood of injury.

GEICO’s motion to (1) stay all pending arbitration proceedings; (2) enjoin the defendant from commencing additional arbitration or collection proceedings in state court pending resolution of this federal action; and (3) relieve GEICO of its obligation to post security for the injunction, which was granted, against the Bu Defendants.

The only way to defeat or deter insurance fraud is to take the profits out of the system because it is difficult, if not impossible, to get the government to prosecute. GEICO, of New York state, has decided to fight back as it appears to have fallen victim to several fraudsters taking advantage of the patient-friendly no-fault law that requires immediate payment and no time to investigate. GEICO, through serious investigation and admissions by some of the fraudsters, has uncovered a massive insurance fraud scheme that will allow it – if proven at trial – to obtain a judgment for serious damages from the fraudsters. The court, recognizing the high probability that GEICO is right, has stayed the hundreds of arbitrations that are supposedly fictitious, giving GEICO the peace it needs to prove its claims at trial.

He can be reached at http://www.zalma.com and zalma@zalma.com. Subscribe and receive videos limited to Excellence in Claims Handling subscribers at locals.com https://zalmaoninsurance.locals.com/subscribe. Subscribe to Excellence in Claims Handling at https://barryzalma.substack.com/welcome. Now available Barry Zalma’s newest book, Bad faith damages, available here. The new book is available as a Kindle book, paperback or as a hardcover.