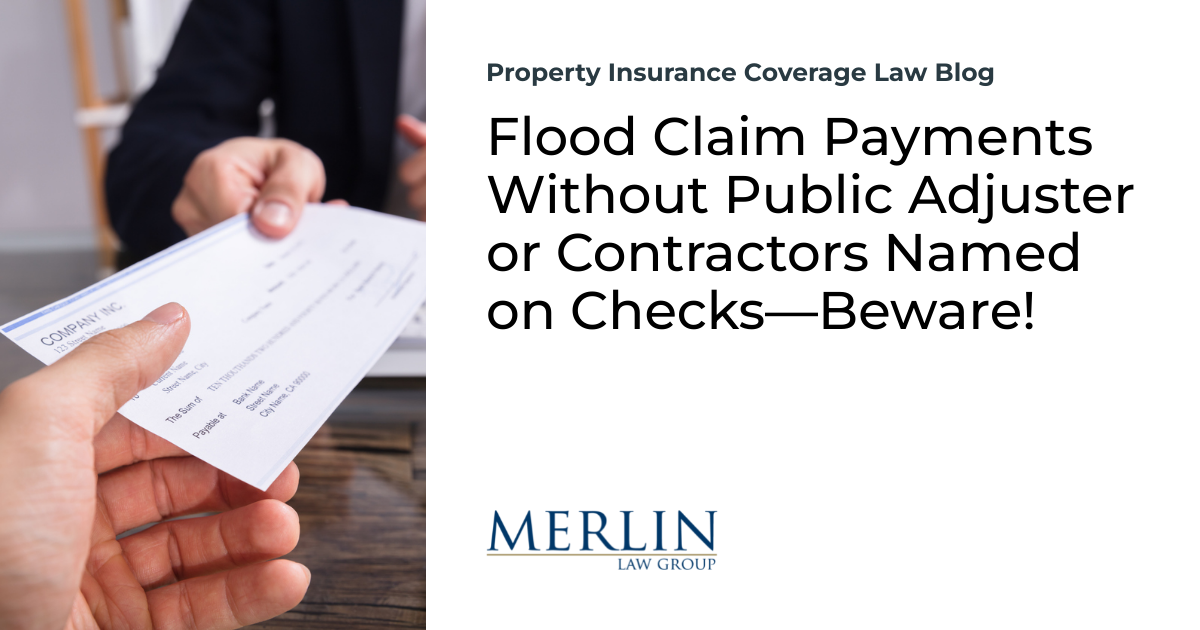 The National Flood Program is different. It follows its own rules and regulations based on federal law, not state law. Public adjusters and contractors have written and called to say the flood payment checks do not include their names. Warning – you should expect that they will not include your name and that your payment will go directly to the policyholder. Policyholders and their public adjusters and contractors must make advance decisions about how to handle national flood payments among themselves.

A federal flood case in which a public adjuster represented the policyholder long after the loss noted the following:

The NFIP was established by the National Flood Insurance Act in recognition that “many factors have made it uneconomic for the private insurance industry alone to make flood insurance available to those who need such protection on reasonable terms.”

; 42 USC § 4001(b). Under the law, “the federal government provides subsidies for flood insurance and local officials are required to adopt and enforce various management measures.”… FEMA administers the NFIP, through which “taxpayer funds.” . . pay for claims in excess of the premiums collected from the insured parties.”… Congress authorized FEMA to “prescribe regulations establishing the general method or methods by which proven and approved claims for loss may be adjusted and paid for any damage to or loss of property covered by flood insurance.’ 42 USC § 4019. FEMA’s regulatory scheme, including the terms and precise language of the SFIP, is recorded in the Code of Federal Regulations. See 44 CFR §§ 61.1-78.14.

Pursuant to its authority under 42 USC § 4081(a), FEMA created the Write-Your-own (‘WYO’) program, which allows private insurers to issue and administer flood risk policies under the NFIP. Looks Jacobson, 672 F.3d at 174-75. “WYO companies” such as Allstate “may act as “United States Revenue Agents” . . . but they are not general agents and must therefore strictly enforce the provisions of the regulations, varying the terms of a policy only with FEMA’s express written consent.’. .. Because of the relationship between WYO providers and the government, SFIP policies and contracts “must be strictly interpreted and enforced” and should not be “interpreted as any private insurance contract.” Id.

The SFIP indicates that flood insurance is provided “in accordance with the terms of the National Flood Insurance Act of 1968 and its amendments, and Title 44 of the Code of Federal Regulations.” SFIP § I. The SFIP provides that the insured will be paid “for direct physical loss by or from flood” to the covered property if the insured has “paid the proper premium,” “comp.[ied] with all terms of this policy” and “provided accurate information and statements.”

Therefore, the statutory and regulatory requirements of the NFIP must be strictly interpreted and enforced, regardless of conduct by the defendant which, according to the plaintiff, suggested a waiver of those requirements. When “private parties make claims on the public revenue agency” and “federal funds are involved, the person seeking those funds is required to acquaint himself with the legal requirements for receiving such funds.” Id. (internal citation omitted). “Those dealing with the government are expected to know the law and may not rely on government action contrary to the law” to circumvent the requirement of strict compliance. Id. (internal citation omitted). This applies even where strict construction and application of “government insurance”. . . can sometimes create apparently unfair results, which could have been avoided by the interpretation of typical private insurance contracts.

Thus, Defendant did not waive the statutory requirement that Plaintiff bring this action within one year of the mailing of the notice, regardless of whether Defendant engaged in continuing conduct after the Partial Dismissal Notice was sent, as Plaintiff suggests. The plaintiff was required to familiarize himself with the statutory requirement, and the defendant’s conduct cannot excuse the plaintiff’s failure to comply.

Second, contrary to Plaintiff’s suggestion, the record does not reveal any genuine dispute of material fact regarding the nature or extent of Plaintiff’s communications with Defendant after March 2017. Plaintiff’s counsel suggested at oral argument that Plaintiff had been under the impression that negotiations with Defendant were ongoing after March and April 2017 and expected such negotiations to continue. But the record contains no communication between the plaintiff and the defendant after April 2017. …Even Mr. Raske’s testimony, upon which Plaintiff relies heavily, merely indicates that the last communication between Plaintiff and Defendant was in May 2017, no later than …. Thus, even drawing all reasonable inferences in Plaintiff’s favor, there is no evidence in the record to support a finding that Plaintiff and Defendant were engaged in an ongoing negotiation process through October 5, 2017—the date that would place Plaintiff’s filing of this action “within one year after the process was concluded. Plaintiff’s understanding or expectation of ongoing negotiations with defendant does not create a genuine dispute of material fact in the absence of evidence in the record to support that understanding.

Additionally, although the Second Circuit has not yet addressed this issue, several other circuits have concluded that a party insured through the NFIP may not bring additional governmental tort claims arising out of the handling of a claim. See e.g. CER 1988, Inc. v. Aetna Cas. & Sour. Co., 386 F.3d 263, 271 (3rd Cir. 2004) (holding that state tort claims are preempted and plaintiffs are limited to “resolving their disputes using the remedies provided by FEMA” and noting that the decision “is consistent with the decisions’ of other courts’); Wright v. Allstate Ins. Co., 500 F.3d 390, 394, 250 Fed. Approx. 1 (5th Cir. 2007); Gunter v. Farmers Ins. Co., 736 F.3d 768, 772 (8th Cir. 2013). And while the Second Circuit “has not directly addressed the preemptive effect of the NFIP, the court’s more general commentary on the NFIA’s regulatory scheme is instructive.” Copeland, 2017 US Dist. LEXIS 229904, 2017 WL 10088571. The Copeland court reviewed the Second Circuit’s clear directive that the requirements of the SFIP must be “strictly construed and enforced,” Jacobson672 F.3d at 175, finding it therefore “not surprising that nearly every court in this circuit considering the issue has concluded that the NFIA does not expressly permit an insured to bring extracontractual claims under state law relating to an insurer’s claims handling, thereby preempting these state claims, … …this court will join many others in concluding that the NFIP preempts the additional state claims brought by the plaintiff.

In human intercourse, the tragedy begins, not when there is a misunderstanding of words, but when the silence is not understood.