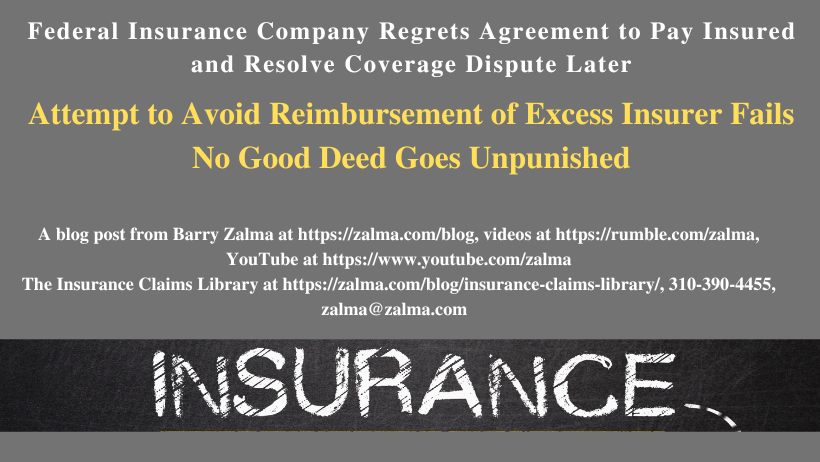 Watch the full video at https://rumble.com/v1kazdh-federal-insurance-company-regrets-agreement-to-pay-insured-and-resolve-cove.html and at https://www.youtube.com/ watch ?v=63A3OgXTmnc

In May 2014, Elliot Roger murdered his two roommates and their friend at the Capri Apartments (Capri) in Isla Vista, California. The victims’ heirs filed a wrongful death lawsuit (Chen v. Hi-Desert Mobile Home Park (Super. Ct. Santa Barbara County, 2015, No. 15CV04163) (Chen action) against the owner of the apartments, Hi-Desert Mobile Home Park, LP (Hi-Desert) and the manager, Asset Campus Housing, Inc. (ACH). The action alleged that ACH and Hi-Desert had notice of Roger’s violent propensity but assigned him to be the victims’ roommate.

The insurance companies did right by their insured. They each contributed funds to a resolution of the underlying action, leaving the issue of priority of coverage to separate disputes between the insurers.

The trial court found that Western’s coverage of ACH is above both AIIC’s and Federal’s coverage. The court’s grant of summary judgment in favor of Western resolved all claims against Federal. Federal Appeals.

Western’s coverage is not Primary

Western’s policy provides two types of general liability coverage. One is for 54 locations specifically designated with their names and addresses. It is undisputed that this is primary liability protection. But Capri is not one of those properties.

Western’s other coverage is through an endorsement of the policy under the heading “Property Managed Property Contingent.” It provides coverage for property managed but not owned by ACH. The prerequisite is that the property owner must have personal injury insurance with limits equal to or greater than $1 million.

The endorsement provides that Western’s coverage is in excess of any other insurance that ACH carries, whether primary or deductible. The language of Western’s endorsement could not be clearer.

Here, Western does not use its second insurance clause to convert its policy from primary to deductible. Instead, it uses the clause to show that its policy is ab initio excess over all other insurances. That’s the bargain Western made with its insureds.

The only insurer named in the schedule for underlying insurance is AIIC with underlying limits of $1 million.

The only contingency to Federal’s liability under its policy is that AIIC’s $1 million primary policy limits are exhausted. Federal’s liability was not subject to exhaustion of limits under Western’s policy. Instead, Federal committed to provide coverage immediately upon exhaustion of AIIC’s policy limits, while Western committed to provide coverage only when the limits of all other available coverage, both primary and excess, were exceeded.

Federal is trying to stitch together an argument pieced together from pieces of its policy. Its handiwork has failed to create even a reasonable ambiguity. Any such ambiguity would be construed against Federal in any event. Had Federal intended that its coverage would not apply until all other policies are exhausted, it could easily have said so. It didn’t. The trial court correctly concluded that Western’s coverage exceeds Federal’s coverage.

The elements of an insurer’s cause of action for equitable subrogation are:

Before the settlement of Chen ACH had an assignable cause of action against Federal because Federal refused to acknowledge its duty to indemnify that ACH was primary to Western’s coverage. It would be absurd to allow Federal to use Western’s money to settle Federal’s debt to ACH, and to keep the settlement from Western’s right to recover the money from Federal. Perhaps the most bizarre of Federal’s arguments is that Western suffered no injuries caused by Federal. Federal is preventing money that rightfully belongs to Western from being returned to it.

Federal is wrong on two counts: Western has been sued in ACH’s breach of contract suit against Federal, and Western and Federal entered into a written contract giving each party the right to assert priority of coverage in Chen measures and compensation.

Western World Insurance Company got it right when there was a dispute between the various insurers as to which insurer was primary, which excess and which – of two excess insurers – had to exhaust before the other would pay. It appeared that Western was last in line and needed to be reimbursed from the others for the money it paid subject to this later trial to determine who was first, second and third. Federal tried to avoid doing the right thing only to have the Court of Appeals shoot down their cobblestone argument. Western World acted fairly and in good faith to the insured and the other insurers only to have Federal try not to pay what it owed.

It is best to purchase your own UM/UIM coverage