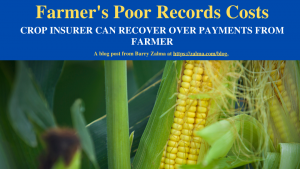 For years, Edgar Miller bought crop insurance in hopes of protecting his farm from bad harvests. While the insurance mostly served that purpose, it also brought him three federal lawsuits, an arbitration, and an adverse decision from the Federal Crop Insurance Corporation. Miller challenged this last decision – the agency’s decision – under the Administrative Procedure Act. The district court rejected the request.

The common plant insurance, issued according to the law, regulates all disputes. Crop insurance requires compliance with the law, associated regulations and the insurance company’s routines. It sets out the details of the insurance cover and the claims process. Certain provisions deal with the adjustment and repayment of regulated claims. For example, Section 21(b)(3) allows for refunds of overpaid claims if a farmer “knowingly misreported” yield information. And § 21(f) contemplates repayment if a farmer does not “keep or provide” certain records.

Edgar Miller, a corn and soybean grower, has experienced this “big regulation” firsthand. Helena Agri-Enters., 988 F.3d at 267. He purchased crop insurance from an approved insurance provider, Farmers Mutual Hail Insurance Company of Iowa. After poor harvests in 2012, 2013 and 2014, Miller filed claims. He received payments for 2012 and 2013. But Farmers Mutual denied his claim for 2014. To make matters worse for Miller, Farmers Mutual realized it had overpaid Miller for 2012 and 2013 because of his poor record keeping. It demanded repayment. When Miller refused, the parties went to arbitration.

Farmers Mutual secured a favorable arbitration award and filed a petition to confirm it. But to make the situation more difficult, the district court vacated the award after finding that the arbitrator had stepped out of line and interpreted the policy in ruling that Farmers Mutual could adjust past claims and seek reimbursement from Miller.

The parties returned to Försäkringsbolaget. It issued, in response, “Final Agency Determination 287.” The ruling explained that several policy provisions require farmers to repay overpaid claims and that insurers have a duty to correct errors in claims. With Final Agency Determination 287 in its hand, if not its ear, Farmers Mutual filed another petition to confirm the arbitration award. This time, the district court granted it, and the Sixth Circuit affirmed.

After reaching the end of the arbitration process, Miller challenged a premise of that ruling – Final Agency Determination 287 – under the Administrative Procedure Act. The district court rejected the request.

The Sixth Circuit was asked to determine whether the final agency decision 287 complied with the Administrative Procedure Act. Only if the sentence is arbitrary and capricious may the Sixth Circuit vacate it as a matter of law

Farmers Mutual asked whether Section 21(b)(3) of the Crop Insurance Policy — which requires repayment if a farmer “knowingly misreported any information relating to any yield” — sets out “the only circumstances” for recovering overpaid claims. Insurers must “review and correct any claim that has not been adjusted according to [the Insurance Corporation’s] loss adjustment procedures.” The insurance company found that (1) several insurance regulations require farmers to repay overpaid claims and (2) insurers have a duty to correct such errors.

The Sixth Circuit concluded that the text of the crop insurance policy and the regulations supported both conclusions.

The text of the policy requires a farmer to “repay any overpayment” under a variety of circumstances. The text of the policy also requires correction of errors. Crop insurance tells insurers to follow the insurer’s loss adjustment procedures and requires farmers to keep and provide records at the insurer’s “request.” These duties reinforce Determination 287’s finding of a duty to review and correct claims.

The insurance company’s procedures convey a similar set of obligations for the policy. The Claims Adjustment Manual outlines comprehensive processes that insurers must follow to adjust claims, including corrected claims. The bulletins and information memoranda subject insurers to regular compliance reviews and urge insurers to “re-evaluate[]” claims after changes in guidance occur.

By all accounts, crop insurance and the regulatory framework support the two core holdings of Determination 287, making it anything but arbitrary and capricious.

The Sixth Circuit found Miller’s objections to the prior decisions unpersuasive. Policy provisions requiring reimbursement were inconsistent with § 21(b) and its abrogation of the insurer’s right to request and inspect records and do not fit within the claim adjustment manual process.

Mr. Miller, a farmer, had his claims challenged primarily due to a lack of effective record keeping that resulted in overpayment of his crop insurance claims. The bylaws, and the policy that records the bylaws in insurance form, require repayment of overpayments. Miller delayed the process through arguments, arbitration, litigation and interesting arguments, none of which convinced the Sixth Circuit, which affirmed the district court’s ruling.