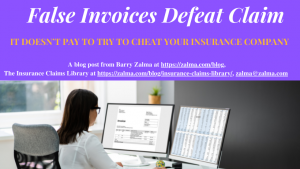 The misrepresentations asserted as a defense by State Auto occurred during the claims settlement process. Sigismondi and State Auto retained adjusters to value the damaged bearing. The adjusters first created a joint inventory—a list of all the damaged items for which Sigismondi was seeking insurance proceeds. State Auto’s adjuster, Chad Foster, then researched the prices of the same or similar items to determine either a “replacement value” (if Sigismondi replaced the item) or an “actual cash value” (if not). Sigismondi’s adjuster, or Sigismondi himself, also appraised the items.

Sigismondi valued some items higher than Foster estimated or could verify. Sigismondi presented what appeared to be original invoices from various suppliers trying to convince State Auto to pay more than its adjusters estimated.

In fact, a Sigismondi employee had scanned at least some of the invoices into the computer and then used editing software to change the items and prices listed by the suppliers. After Foster brought this matter to State Auto’s attention, State Auto sent Sigismondi a disclaimer of rights letter, requesting additional documentation and highlighting an insurance provision stating that the policy would be void if any insured “intentionally conceals or misrepresents a essential fact regarding . . . [a] claims under this policy.”

State Auto subsequently sued after further investigation confirmed the changes. It sought a declaratory judgment that the policy was invalid. It also sought damages for statutory insurance fraud. Sigismondi counterclaim for statutory bad faith. On summary judgment, Sigismondi initially argued that its misrepresentations were not material. The district court determined that the misrepresentations were material and granted summary judgment to State Auto on its declaratory judgment actions and statutory insurance fraud claims.

Sigismondi argued that it did not knowingly or in bad faith provide false or misleading information by submitting the amended invoices, and that the invoices themselves were not in fact misleading. The company claimed it submitted the invoices only to allow the adjusters to identify items and suppliers, not prices. Sigismondi insists this should have been clear because the invoices were dated after the water damage incident.

It was hard to imagine how the invoices – which were manipulated to include prices that did not come from the supplier – were anything but deliberately made to include false or misleading information. A fabricated receipt created by a consumer and presented as an official document from a retailer, without the retailer’s knowledge, constitutes false or misleading information.

Sigismondi also argued that any misrepresentations were not material because the invoices would not be the final say on value – Foster would do its own research into prices based on the goods and suppliers. Sigismondi provided the amended invoices in response to a request for “invoice support” or other “documentation for the claimed value.” Its argument that the invoices to which it attached the prices were only relevant for information about goods and sellers is belied by undisputed evidence. Since this exchange of information was part of an attempt to determine the value of the insured items, the falsified invoices indicating prices charged by vendors were undoubtedly material.

Viewing the record in the light most favorable to Sigismondi, the Third Circuit concluded that the amended invoices were material.

The affirmance of the declaratory relief in favor of State Auto disposed of Sigismondi’s counterclaim for statutory bad faith. Because the insurance policy was void, it did not cover Sigismondi’s damaged inventory. It therefore followed that State Auto cannot be held liable for bad faith rejection of the claim.

The verdict was upheld.

Insurance fraud such as Sigismondi’s attempt is fairly easy to prove. Since the presented invoices and receipts were not original, the insurer only needed to have its adjuster or SIU investigator visit the various vendors to either confirm the authenticity of the invoices or determine that they were prepared in an attempt to defraud. State Auto did just that, proving to the court and the Third Circuit that fraud was attempted. Although Sigismondi had incurred a substantial loss, it recovered nothing because it attempted to cheat and, when caught, claimed that it really had no intention of cheating. The Third Circuit saw through the strange arguments and ruled against Sigismondi and in favor of the insurer.