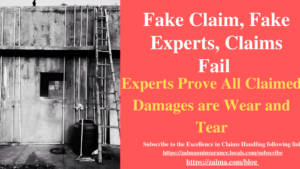 It is not correct to try to shoehorn a distant explosion into a claim for property damage to an old, dilapidated house, the damage to which was unrelated to the explosion. In fact, claiming pre-existing damages is fraudulent.

Hall claims his home was damaged by an explosion that occurred 1.1 miles from his house. State Farm moved for summary judgment and submitted reports from two engineers who separately inspected the property and concluded that the damage they observed was not caused by the explosion, but instead by “normal wear and tear, minor material and installation deficiencies, lack of maintenance, and expansion and contraction of the building materials due to naturally occurring variations in temperature and humidity.”

Hall has a homeowner’s insurance policy with State Farm. The policy “insure[s] for accidental direct physical loss of the property,” but it does not cover losses caused by natural wear and tear, deterioration, or “settling, cracking, shrinking, bulging, or expansion of . . . foundation, walls, floor, ceiling or roof.”

On January 24, 2020, a propane tank leak caused an explosion at Watson Grinding and Manufacturing at 4525 Gessner Road in Houston, Texas. Hall’s home – which was built in 1960 and which Hall bought in 1983 – is 1.8 miles from the explosion site. Hall did not hear or feel anything from the explosion, which occurred while he was sleeping. He heard about the explosion later that day on the news.

After learning of the explosion, Hall inspected the home “but . . . saw no damage at the time.” Hall began to suspect that he was “actually injured [his] home from that explosion” only when the roof of his garage fell six or seven months later, in July or August 2020. After Hall removed the fallen sheet metal from the garage floor, he inspected the roof and noticed that “the joists . . . bent.” Hall saw no other damage to the interior or exterior of his home.

Hall retained counsel and filed a claim in September 2020 under the policy. In April 2021, Hall filed this lawsuit against State Farm, although it had not yet resolved Hall’s claims. The delay was largely due to difficulties in getting the property inspection done. The complaint included seemingly irrelevant and false allegations, including that State Farm acted in bad faith “in a property damage suit due to plumbing leaks” and that “the insurer was found to have hired an investigative firm biased toward finding liability.” Hall’s claim was not for “plumbing leaks,” and State Farm had not denied Hall’s claim at that time.

State Farm had inspected Hall’s property just days before Hall filed his lawsuit. One reason for the delay was that the engineer State Farm hired to inspect Hall’s property “was asked to be removed” from the assignment because of “concerns about communication between [Hall’s] legal representative and the engineer. . . and directives [from Hall’s attorney] on how the inspection would be completed.” That engineer “leaves later an invoice for the amount of time he spent unsuccessfully “trying[ing] to coordinate the visits” to Hall’s property. In short, Hall’s counsel appears to have been a significant reason for State Farm’s delay in adjusting the claim.

State Farm retained a second engineer — Dan Rich of Rich Engineering — who was able to inspect the property in March 2021, but not without difficulty. Hall’s attorney refused to allow Rich to speak with Hall “regarding the history of the residence or the damage attributed to the WGM explosion.” At the time of the inspection, “Rich Engineering was not informed of what damage Mr. Hall specifically attributed to the explosion.” After the inspection, Rich Engineering emailed Hall’s agent a list of questions about the property. Neither Hall nor his advisers responded.

Based on the inspection, Rich Engineering concluded that “[t]his residence was not damaged by the explosion.” The report states that: “the foundation was not damaged by the explosion”; cracks in the plaster wall “were consistent with normal wear and tear, minor material and installation deficiencies, lack of maintenance, and expansion and contraction of the building materials due to naturally occurring variations in temperature and humidity”; the roof was not damaged; cracks in the attic framing “aged . . . indicate[ing] that the damage preceded the explosion”; “the brick veneer cracks had an aged appearance that suggested they predated the explosion”; and “Rich Engineering did not observe any broken window panes during its site visit.”

As a result of Rich Engineering’s report, State Farm informed Hall’s counsel in May 2021 that they denied Hall’s claims. The denial letter stated that State Farm’s “investigation indicated that the residence was not damaged by the explosion.”

State Farm also hired a structural forensics investigator to inspect the property, BSC Forensic Services, LLC, “to document conditions consistent with the effects of an explosion that occurred on January 24, 2020, at the Watson Grinding Facility, if any.” The BSC report noted that “BSC’s inspection revealed no conditions at the subject property attributable to energy surges associated with the reported explosion,” and noted that “the surrounding properties of similar construction also showed no such evidence.” The report concluded that “the collapsed roof of the garage . . . was due to prolonged hanging condition of the rafters associated with improper timbering (large knots) and excessive load from rafter supports in the attic space above, and that this condition was not “caused or aggravated by the reported explosion event”. “

“Experts” must see the damage and be qualified to testify

Hall responded with an engineer’s report that did not visit the property, did not review State Farm’s expert reports, and provided no basis for believing the home “appeared” to be damaged by the explosion. Hall also submitted a report from a meteorologist whose speculation about the root cause of the alleged damage is both outside his expertise and unhelpful.

The motion to exclude expert testimony

Shiran Perera is a structural engineer who was appointed to give an opinion on whether the explosion “caused damage[] to the insured property.” Perera speculated that there were some injuries that “appeared” to be related to or “possibly” could be consistent with vibration-related injuries. It was ruled out because his testimony was unreliable.

The dispute centers on whether the damage to Hall’s home was caused by an explosion months earlier and 1.8 miles away. State Farm presented ample evidence that “[t]his residence was not damaged by the explosion.” Hall’s evidence, liberally construed, only supports the conclusions that Hall’s home had several structural problems (as evidenced by the photographs), that an explosion 1.8 miles away occurred in January 2020, and six months after the explosion, parts of the garage roof, and some cracks were found.

Hall presented no evidence that the explosion actually damaged his home.

As a matter of law, State Farm did not violate the policy by denying Hall’s claim for coverage. The claim for breach of contract was therefore dismissed. Hall did not point to or present admissible evidence showing that State Farm violated the Texas Insurance Code, engaged in deceptive trade practices, breached a duty of good faith and fair dealing, conspired to commit illegal acts, or committed fraud. These claims were also rejected.

The decision was obvious. State Farm presented evidence and Hall presented speculation while working hard to establish a bad faith case against State Farm. In dismissing the suit, the court did what it was bound to do. However, in my opinion, it should also have reported Hall to the US Attorney for attempting to defraud State Farm.