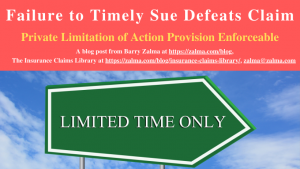 Hanover Insurance Company, Inc. (“Hanover”) and Sportsinsurance.com, Inc. (“Sportsinsurance”) both appealed the district court’s order granting in part and denying in part Hanover’s motion to dismiss Sportsinsurance’s complaint for failure to file suit within two years after learning it was the victim of an embezzlement.

IN Sportsinsurance.com, Inc. v. The Hanover Insurance Company, Inc., no. 21-1967-cv (L), 21-2063-cv (XAP), US Court of Appeals, Second Circuit (Nov. 4, 2022) Sportssinsurance discovered that Kenza El Baroudi (“Baroudi”), its Chief Financial Officer, embezzled from the company. Sportssinsurance considered that Baroudi’s misappropriation constituted a loss under an insurance (“Policy”) it had with Hanover, and therefore filed a claim under the Police.

The district court dismissed Sportsinsurance’s breach of contract claim as time-barred under the policy’s Limitations Provision, which required Sportsinsurance to bring an action “involving a loss” within two years “from the date . . . [it] “discovered” the loss.” The district court found, among other things, that the implied federal claim was not covered by the statute of limitations because it did not involve a loss.

In concluding that it has jurisdiction to review the breach of contract claim, the Second Circuit found that the question became whether it should exercise its discretion to do so and concluded that addressing Sportssinsurance’s cross-appeal will promote judicial efficiency and litigation without prejudice to of the parties.

The next question, the question of whether the breach of contract claim is time-barred and thus subject to dismissal. Because an agreement that modifies the statute of limitations by specifying a shorter, but reasonable, period within which an action must be commenced is enforceable. The language in an insurance policy’s contractual statute of limitations is interpreted to mean that the clock does not start at the time of the accident itself, but only when “the right to sue exists.” That standard rule gives way if a policy contains “exceptionally clear language” that, for example, “sets the limitation period to the date of the accident.”

Importantly, and in relevant part, the policy defines “discovered” as “the time at which [Sportsinsurance] first become[s] aware of facts which would lead a reasonable person to believe that a loss of a type covered by this insurance has occurred or will occur.” The specific definition establishes the start of the limitation period to when Sportsinsurance reasonably knew it had or would suffer a loss. This is the type of “particularly clear language” that displaces the default rule. Therefore, the contractual limitation period began in January 2016 when Sportssinsurance “discovered” Baroudi’s “fraud and theft”.

The Second Circuit concluded that this limitation provision is not unreasonable, nor is there anything inherently unreasonable about a two-year statute of limitations.

Sportsinsurance argued that the limitation provision here is unreasonable because it requires that Sportsinsurance (1) “comp.[y] with the terms” of the policy and (2) not bring suit until “90 days after it filed its proof of loss,” which it was required to file within 120 days of discovery of the loss. These requirements did not prevent Sportsinsurance from filing timely action. Sportsinsurance “discovered” the loss in January 2016. By January 2017, Hanover had investigated and “denied” Sportsinsurance’s claim. Sportsinsurance had a full year to file suit against Hanover. It did not. Because the statute of limitations is fair and reasonable is it enforceable.

In a last-ditch effort to circumvent the limitation provision, Sportssinsurance argued that Hanover is either barred from enforcing or waived the limitation provision. The mere assertion that Hanover stated it was open to additional information cannot carry Sportssinsurance’s estoppel or waiver argument to prevent affirmance of the trial court’s order dismissing the breach of contract claim.

The first two violations “involve” Baroudi’s misappropriation because the misappropriation is the basis of the claim under the policy. The implied federal requirement is thus time-barred. The Second Circuit accordingly reversed, rejecting the claim that Hanover breached the implied covenant of good faith and fair dealing.

The declaratory judgment action was dismissed as time-barred because it involved “loss” as Sportssinsurance defined that term.

The insurance policy almost always contains a private limitation provision that requires the action to be brought against the insurer within one or two years after the claim is discovered. Some states, such as California, require by court ruling and regulation that the private limitation of suit provisions begin to run when the claim is dismissed rather than when it is discovered. In this case, it didn’t matter which, because plaintiff Sportsinsurance waited more than two years from the denial to file a lawsuit proving that the incumbent will lose.