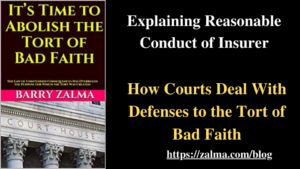 I will not write in a week after this but you have available more than 4250 posts and more than 400 videos on rumble.com/zalma.

When the court found that an insurance claim was debatable, the bad faith claim must fail. Allegations of bad faith were insufficient under law where the status of the Kentucky Act in the matter was “quite debatable”. [Willowbrook Invs., LLC v. Md. Cas. Co., 325 F.Supp.3d 813 (W.D. Ky. 2018)

The public, and those who serve on juries, must understand that an aggressive fraud investigation, even if it reaches an incorrect result, is not malicious and if negligent, not an act of bad faith.

Today, if a jury believes the insurer was wrong in its decision, it must award punitive damages, regardless of the instructions read to it by the judge about the elements of the tort. Because of the bad publicity created by the policyholders’ bar and the press reports of massive bad faith judgments, insurers are not liked by a majority of the people who serve on juries. The prudent defense lawyer will assume that at least three of the jurors will voted for the policyholder, regardless of the evidence presented, and defense counsel must win over the remaining nine.

The bad publicity that was given to insurers by the early bad faith cases has poisoned the public image of insurers. The plaintiff insured only needs to convince six of the jurors who may sit in judgment without anti-insurer prejudice to receive a majority verdict with 9 votes.

As a business necessity, insurers must have the confidence of the public that they are financially sound, secure and have an overabundance of funds available to pay claims. The need to show the security of the company to the public has the effect of convincing juries that a multimillion-dollar verdict against the insurer will not hurt it. Plaintiffs’ lawyers disingenuously tell juries that they don’t want to harm the insurance company, all they want to do is get its attention. They argue that a $10 million verdict might cause an itch in the corporate pocketbook sufficient to cause management to scratch away the need to improperly reject claims. The argument is hard for a jury of working people to withstand.

The Tort of Bad Faith Has Served its Purpose

The tort of bad faith, and the punitive damages that seem to go with it, have, in my opinion, served their purpose. Insurers now have professional claims departments. Insureds are almost universally treated with courtesy and respect. More than 90% of all claims are resolved without litigation or argument. Legitimate claims are paid with alacrity.

Insurance fraud continues to grow. The amount of money taken from insurers every year are in the tens or hundreds of billions of dollars. The fear of punitive damages has made the fight against fraud difficult and almost impossible. Even when an insured is arrested, tried and convicted of the crime of insurance fraud, or attempted insurance fraud. Attempts will still be made to sue the insurer for the tort of bad faith.

Before I retired from the practice of law, I contended daily with insurers who wanted to fight fraud but who found they must decide to pay a claim rather than face the exposure of a punitive damage judgment. Sometimes, the settlement of bad faith lawsuits, where there has been no bad faith and an appropriate denial of a claim or refusal to pay a policy limits demand, the insurer concludes it must pay more to avoid a potential run-away jury.

I can, as my mentors taught me 53 years ago, state with confidence the opinion that an insurer should spend millions of dollars for the defense of a non-covered or fraudulent claim and not a dime for tribute to an insured who brings a spurious bad faith law suit.

However, practical insurance professionals have a need to resolve litigation as inexpensively as possible to protect the shareholders who want the insurer to make a profit. As a result, the insurer will disobey the millions for defense covenant and will make a business decision to pay the non-covered loss or the fraud, rather than take a chance on an adverse verdict.

As with all things in insurance, the attitudes of insurers move in cycles. More often than not, I am now called upon to testify as an expert in bad faith cases that the insurer insists on taking to trial by jury rather than pay off a scofflaw.

I can only hope that this cycle continues and more attempts at fraud are defeated.

The Fourteenth Amendment to the U.S. Constitution

No State shall make or enforce any law which shall abridge the privileges or immunities of citizens of the United States; nor shall any State deprive any person of life, liberty, or property, without due process of law; nor deny to any person within its jurisdiction the equal protection of the laws.

If the law allows an insured to sue for tort damages as a result of a breach of the covenant of good faith and fair dealing equal protection should allow an insurer to sue the insured for tort damages as a result of the breach of the same covenant. Some litigants cannot, under our system of constitutional law, be more equal than others. Yet, until a court agrees, insureds are more equal than their insurer.

Although the courts may think so, the insured’s breach of the covenant of good faith and fair dealing is also separately actionable as a contract claim and that some forms of misconduct by an insured will void coverage under the insurance policy. (Imperial Cas. & Indem. Co. v. Sogomonian (1988) 198 Cal.App.3d 169, 182.

To paraphrase what George Orwell opined in his novel Animal Farm some litigants are more equal than other litigants. Since both the insured and the insurer freely entered into the contract of insurance it would appear only fair if one is allowed to obtain tort damages for breach of the covenant of good faith and fair dealing the other should also have the same opportunity.

While Connecticut, like California, recognizes that every insurance policy carries “an implied duty requiring that neither party do anything that will injure the right of the other to receive the benefits of the agreement,” [De La Concha of Hartford, Inc. v. Aetna Life Ins. Co., 269 Conn. 424, 432–33, 849 A.2d 382 (2004)] no court in Connecticut has recognized a tortious “reverse bad faith” against insured persons, nor is it likely that courts in Connecticut will do so in the light of established precedents. It follows that since an insured’s offense against the union cannot be sued for damages, an insurer cannot reduce liability for its own tortious conduct by presenting an affirmative defense of bad faith. [Hartford Roman Catholic Diocesan, Corp. v. Interstate Fire &amp; Cas. Co., 199 F.Supp.3d 559 (D. Conn. 2016)]

The abuse of damages in bad faith has become so extreme that, in my opinion, the damages must be eliminated. Since the weight of authority is that no matter how reasonable the arguments are for abolishing damages in bad faith, the damages must be applied in a fair and equal manner to both the insured and the insurer and if that is impossible it is contrary to bad faith. the requirements of the Fourteenth Amendment to the US Constitution and its requirements for equal protection.

An insurer that is violated by its insured should have the same right to damages and punitive damages for violations of the union as the insured can. No lawsuit should ever be more equal than any other.