Evil Employee still allows the employer to be defended 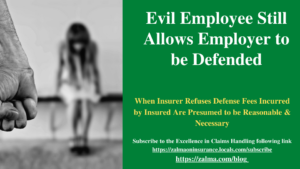 Larry Nassar, who was affiliated with the non-profit organization USA Gymnastics, Inc. (“USAG”), sexually assaulted hundreds of female athletes. After Nassar’s behavior came to light, USAG faced many lawsuits and several investigations. USAG and its insurers, including Liberty Insurance Underwriters, Inc., litigated coverage issues in an adversary proceeding before a bankruptcy court. In an earlier appeal, among other rulings, the Seventh Circuit upheld the decision that Liberty had a duty to defend USAG.

IN USA Gymnastics v. Liberty Insurance Underwriters, Inc., no. 21-2914, United States Court of Appeals, Seventh Circuit (August 16, 2022) USAG and Liberty contested the amount of fees to which USAG was entitled after Liberty’s liability to defend was upheld by the Seventh Circuit.

Right to reimbursement of attorney’s fees

There were also ancillary disputes over the amount of legal fees owed by Liberty to USAG.

The underlying facts are described in detail in USA Gymnastics v. Liberty Ins. Underwriters, Inc., 27 F.4th 499, 508 (7th Cir. 2022). In short, Nassar used his position within the USAG to sexually assault hundreds of women and girls over several decades. Because of that abuse, USAG has faced hundreds of lawsuits by former athletes, as well as multiple investigations by federal and state entities, including Congress, the Indiana Attorney General, and the United States Olympic and Paralympic Committee (“USOPC”).

While the first appeal was pending, the parties continued to dispute and raise issues of payment. Liberty did not agree to USAG’s demands and sought to stay the district court’s defense order. In turn, USAG moved to enforce the order.

Additionally, USAG offered expert testimony from attorney Gene Schoon, who had prior experience serving as a national coordinating agent during his days as a practicing attorney. He testified that, in his opinion, all fees requested by USAG were reasonable and necessary. On the other hand, Liberty presented the expert testimony of attorney Brand Cooper. At that time, Cooper testified that he determined that certain fee amounts incurred by USAG—which totaled approximately $1.43 million—were reasonable and necessary. But almost immediately Cooper contradicted his earlier testimony. In response to the court’s questions, Cooper expanded on the nature of his objections but declined to provide concrete numbers that were not disputed.

In September 2020, the bankruptcy court filed proposed findings and conclusions. The court rejected Liberty’s argument, concluding that USAG was entitled under applicable case law to a presumption that the fees incurred were reasonable and necessary. The court also found that Schoon “is the more credible and reliable expert witness.” According to the bankruptcy court, USAG had proven by a preponderance of the evidence that $1,944,354.26 of the fees it incurred were reasonable and necessary. So, the court recommended that the district court enter judgment with that amount, plus prejudgment interest. Liberty filed objections to the bankruptcy court’s proposed findings and conclusions.

The litigation, due to payments made by Liberty, before the Seventh Circuit concerns the remaining $458,472.26 of the judgment.

Presumption that attorney’s fees are reasonable and necessary

Liberty contends that the bankruptcy and district courts misapplied the law in concluding that the fees incurred by USAG were reasonable and necessary.

IN Taco Bell Corp. v. Continental Casualty Co., the Seventh Circuit considered a scenario where an insurer had breached its duty to defend but later claimed that the policyholder had incurred excessive premiums. Under these circumstances, the court held, the policyholder had “an incentive to minimize his legal costs” so that there was “no opportunity for a thorough legal review.”

The presumption is akin to a burden of proof because it determines the outcome in cases where the evidence is in the balance and therefore furthers the substantive policy of a state. This points to the presumption as more substantive than procedural.

In Liberty’s view, USAG is not entitled to the presumption because it did not adequately supervise the outside counsel it retained, and it did not fully pay the fees it incurred. According to Liberty, USAG did not meaningfully monitor outside agents because Schneider never requested write-offs from outside agents and rarely followed up with them to ask questions about invoices they submitted.

A litigant can supervise its outside counsel without refusing to pay portions of legal bills or engaging in hair-splitting over those bills. Nothing in the case law prescribes otherwise. Liberty claims that Thomson the presumption does not apply because USAG failed to pay approximately 30 percent of the fees it incurred.

The market-tested presumption applies when, following an insurer’s breach of the duty to defend, a policyholder has monitored and occurred attorney’s fees without any expectation of payment from the insurer. Payment from the policyholder is not necessarily required. That is because, as here, the policyholder may lack sufficient funds to pay fees reasonable and necessary for its defense. However, if the policyholder pays a significant proportion of its premiums – particularly when it is struggling to cover its day-to-day operating costs – that is strong evidence of the market’s incentive to save, making the presumption applicable.

It is undisputed that USAG paid almost 70 percent of the legal fees for which reimbursement is now sought. It is convincing evidence of a market test. This part of Thomson the presumption supports rather than contradicts the bankruptcy and district courts’ conclusions that the fees USAG sought are presumed to be reasonable and necessary.

An insurer’s objections to a policyholder’s choice of counsel lose their force when the insurer waives its duty to defend and is found to be wrong in law. Had Liberty distrusted USAG’s incentive to economize on its litigation costs, Liberty could have reserved its defense that it had no duty to defend and adopted USAG’s defense. In that scenario, Liberty could have selected and supervised and paid for the lawyers who defended USAG, and Liberty could later have sought compensation if it proved that it had indeed had no duty to defend. Liberty chose not to, instead choosing to play by not defending USAG.

The court concluded that USAG’s practice was nonetheless sufficient to support Thomson the application of the presumption, as “[i]nvoices was reviewed at three different levels that included review by the Chief Financial Officer responsible for overseeing and approving payment of USAG’s expenses.” As a fact-specific decision regarding attorneys’ fees, that decision derives considerable deference from the Seventh Circuit, concluding that there is no adequate basis for disturbing it.

There is no dispute that USAG was bankrupt and had no money left over. Liberty has not identified evidence to dispute the factual finding that USAG used the grant money to stay afloat by paying any bills it had incurred. The record does not support, let alone require, any findings that USAG was hoarding huge sums of money for legal expenses, which would have removed any need for savings.

Since the total value approach advocated by Schoon applies here, it is unnecessary to examine individual rows in the manner Liberty requests.

Therefore, the judgment was upheld.

Insurers take the risk of paying more for the defense of an insured when it refuses to defend and is later found to have been at fault and a court orders the insurer to defend or indemnify the insured. In such a situation, there is a presumption that an insured who uses his own money to pay counsel paid only reasonable and necessary fees. As the Seventh Circuit found, the insured—in bankruptcy—did not have funds available to pay excessive fees and assumed that what they paid and what they could not pay was reasonable and necessary and Liberty must reimburse USAG for those fees. If Liberty defended itself under a reservation of rights, it could control the charges and if it was found to lack coverage, it could obtain compensation from the insured from any assets available from the bankruptcy court. Liberty gambled it was right and lost and must pay the fees charged by USAG.