Duty to defend is required but not for additional insureds 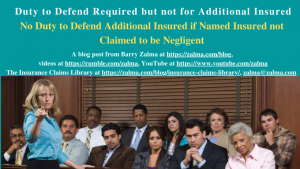 A casino owner dissatisfied with the quality of construction of his new casino sued his general contractor and others in Maryland State Court. The prime contractor filed a third-party complaint against a subcontractor, and that subcontractor’s insurer filed suit in the United States District Court for the Southern District of Florida seeking a declaratory judgment that it need not defend the prime contractor and the subcontractor. IN The Cincinnati Specialty Underwriters Insurance Company v. KNS GROUP, LLC, GM&P Consulting And Glazing Contractors, Inc., Gemini Insurance Companyno. 21-13628, United States Court of Appeals, Eleventh Circuit (October 6, 2022) the Eleventh Circuit entered a Salomon-like decision, making some happy and others not.

The parties in this case joined together to build Maryland Live! Casino and hotel in Anne Arundel County, Maryland. Tutor Perini Building Corporation (“Tutor Perini”), the general contractor leading the construction project, engaged GM&P to provide exterior glazing for the building. GM&P, in turn, engaged subcontractor KNS to assist by glazing and installing window walls. The parties signed a contract on June 5, 2017, in which KNS agreed to “collect, maintain and pay all premiums for” commercial general liability and other types of insurance, and to indemnify GM&P for liability for damage “to person or property caused in whole or in part by any act, omission or neglect of the subcontractor[.]”

KNS acquired commercial liability insurance (the “Policy”) from Cincinnati for the relevant period. The policy covered losses due to “property damage,” which it defined as “[p]physical damage to tangible property” or “[l]us from the use of tangible property that is not physically damaged.” The policy “includes[d] as additional insured” any party that KNS, the named insured, has provided in writing that it would insure under its policy.

June 25, 2020 lawsuit (the “Underlying Action”) filed by PPE Casino Resorts Maryland, LLC (“PPE”), the casino’s owner, against its general contractor and subcontractors in the Circuit Court for Anne Arundel County. The state court complaint alleged, including, that GM&P installed a defective “Glass Façade” that has “loose gaskets between window panels, damaged sealants and panel frames, and misaligned window walls creating a risk of property damage.” PPE alleged that GM&P’s negligent furnishing of materials and negligent installation of the glass facade breached GM&P’s duty to PPE to complete the facade “safely and without causing material damage to PPE or creating a risk of material damage.”

GM&P responded with a third-party complaint in the underlying action against KNS and two other third-party defendants who played roles in the construction process. In it, GM&P brought claims against KNS for breach of contract and negligence due to KNS’s alleged defective construction of the casino.

In July 2020, Cincinnati sued in federal district court seeking a declaratory judgment granting no duty to defend and no duty to indemnify KNS or GM&P in the underlying action.

An insurer’s duty to defend an insured in an action based on Florida law arises when the complaint alleges facts that are fair and potentially bring the suit within the insurance cover and does not require you to delve deeper into the matter. The Eleventh Circuit analyzes the duty to defend by comparing the allegations in the complaint to the language of the policy.

An insurer does not have to defend an insured party if an exclusion from insurance applies. If an insured meets its original burden of showing that coverage applies, the burden shifts to the insurer to prove that the injury arose from an excluded cause.

NO DUTY TO DEFEND ADDITIONAL INSURED

The court concluded that Cincinnati’s additional insured endorsement does not provide coverage to GM&P. The policy limits GM&P’s coverage to “bodily injury,” “property injury,” or “personal and publicity injury” caused, in whole or in part, by KNS or KNS’s agents. The complaint in the underlying action alleges that GM&P was negligent in its furnishing of materials and installation of the glass facade. It alleges no negligence by KNS or any of its agents. Without more, Cincinnati has no duty to defend GM&P in the underlying action. Cincinnati also has no obligation to indemnify GM&P.

There is a clear difference between “caused by” and “caused in part by.” The latter term means that even if the complaint alleged that KNS was only 1% responsible for causing the defective performance, Cincinnati would have a duty to defend GM&P.

The complaint in the underlying action alleges that “the glass facade supplied and installed by” GM&P and other entities, including Tutor Perini and CI Energia Solar SASES Windows (“CI Energia”) “is riddled with systemic defects, including loose gaskets between window panels, damaged sealants and panel frames and faulty window walls that create a risk of property damage.” In turn, GM&P’s third-party complaint states that, if proven, the alleged property damage was the fault of KNS and/or its agents.

The policy includes a breach of contract exclusion that reads:

This insurance does not cover claims for “bodily injury” or “property damage” arising directly or indirectly from breach of express or implied contract, including breach of an implied-in-law or implied-in-fact contract. This exception does not apply to liability that an insured would have in the absence of the agreement.

Cincinnati has a duty to defend this color all over a few claims fall within its scope of coverage. Because PPE’s complaint in the underlying action includes allegations that reasonably fit within the policy’s definition of “property damage” and are likely not covered by the policy’s exclusions, Cincinnati has a duty to defend KNS in the underlying action.

THE COMPENSATION QUESTION IS PREMATURE

The district court’s determination that it is still premature to rule on Cincinnati’s obligation to indemnify KNS for any damages it may be liable for in the Underlying Action was appropriate because indemnification depends on evidence not contained in the current set of motions.

Therefore, the Eleventh Circuit concluded that it granted:

The Eleventh Circuit, unlike the litigants, read the entire policy (RTFP) and made the only logical decisions based on the evidence before it. The named insured was entitled to a defense because there was property damage and no applicable exclusion. The additional insured was not entitled to a defense because the property damage was not alleged to have been caused by the named insured.