Don’t hide the problem until the trial 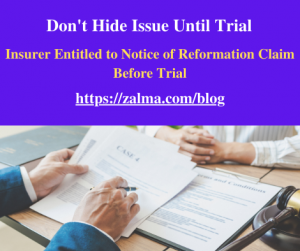 During the breach of contract trial, the plaintiff sought to amend his complaint to include an otherwise improper reformation claim based on mutual mistake and a preexisting oral agreement. In 34-06 73, LLC, et al. v. Seneca Insurance Companyy, 2022 NY Slip Op 06029, No. 81, New York Court of Appeals (Oct. 27, 2022), the insurer appealed the reformation of its policy sought for the first time at trial.

Seneca Insurance Company issued to plaintiffs 34-06 73, LLC, Bud Media, LLC and Coors Media, LLC a multi-million dollar written policy covering several of the plaintiffs’ vacant commercial properties. The parties do not dispute the content of the policy, only whether the plaintiffs’ complaint alleging breach of contract and seeking damages causes the defendant to become aware of the transactions or events underlying the plaintiffs’ delayed claim to reform the policy to eliminate the condition that supported the denial of the claim.

The policy, as issued, included a Protective Safeguards Endorsement (“PSE”) which required, among other things, that the plaintiff have an automatic sprinkler system on the subject property as an essential condition precedent to coverage.

Approximately one month after the policy came into effect, the defendant’s counsel conducted an inspection of the premises and issued a report to the plaintiff’s principal and sole owner, Mohammad Malik, informing him that there was no compliant sprinkler system on the premises and recommending that the plaintiff notify the insurer responsible for the system not working. Malik did not do as advised.

A little more than four months later, there was a fire in the premises and the plaintiff requested payment according to the insurance for damages incurred. The defendant notified the plaintiffs that it denied the claim under the PSE because the plaintiffs did not have a functioning sprinkler system.

The plaintiffs sued for breach of contract and sought over $2.4 million in damages based on the defendant’s failure to cover the fire loss.

At trial, plaintiffs argued for the first time that the written policy did not reflect the parties’ agreement. Malik testified that he told his insurance broker that he did not want the policy to include protective coverage because the properties were vacant buildings or lots and most did not have sprinklers. However, he admitted that he had not read the policy. Defendant’s Vice President of Insurance, Carol Muller, testified that an insurance file disclosed during discovery contained no documents referring to PSE or the sprinkler system, that the premiums listed for the insurance were for a non-sprinklered building, and that the inclusion of PSE may have been a mistake .

After plaintiffs rested, they orally moved to amend the complaint to conform to the pleadings of proof by adding a claim to reform. The court granted the plaintiffs’ motion, concluding that the claim related to the complaint because it was “part of the entire complaint originally” and the jury should determine whether PSE’s entry was due to mutual mistake.

The jury returned a verdict in favor of plaintiff on the reformation, finding that plaintiff established by clear and convincing evidence that the true agreement of the parties was a policy without a PSE and that it was a mutual mistake to include the PSE in the policy.

Defendant argued that the complaint only alleged nonperformance and contained no indication that the contract did not reflect the parties’ intent. The defendant also claimed surprise and prejudice. Regardless, the Appellate Division affirmed the judgment in plaintiffs’ favor, holding that the trial court granted with proviso the plaintiffs’ application to conform the pleadings to trial evidence to assert a claim for reformation.

Applications to amend pleadings are within the sound discretion of the trial court and the exercise of such discretion may be reversed by an appellate court only for abuse as a matter of law. However, the Supreme Court concluded that there was no sound basis in law to grant the amendment to add an untimely requirement.

It was undisputed that by the time plaintiff sought to amend his complaint, the statute of limitations on the reformation claim had expired and was therefore time-barred unless it related to the original pleading. The plaintiff’s claim for reformation will relate only to the original complaint—and thus is not barred by the statute of limitations—only if the complaint gave the defendant notice of the transactions, events, or series of transactions or events to be substantiated. of that claim.

To plead reformation, a plaintiff must allege sufficient facts to support a claim of mutual mistake, meaning that “the parties have reached an oral agreement and, unknown to either, the signed writing does not express that agreement.” New York recognizes a heavy presumption that an intentionally prepared and executed written instrument manifests the true intent of the parties, the reformer must show in no uncertain terms, not only that mistake or fraud exists, but exactly what was really agreed upon between the parties.

In the plaintiffs’ complaint, they failed to disclose to the defendant the transactions or events upon which the plaintiffs based their reformation claim.

In their original complaint, plaintiffs refer to a specific written policy that they identified as the parties’ agreement and that they allege defendant violated. The complaint further alleged that the plaintiffs satisfied all conditions precedent and subsequent pursuant to the terms of the subject policy. The latter contention is fatal to plaintiffs’ contention that the complaint states the transactions or events to be proved in support of a claim for reformation. In fact, if anything, it suggests the opposite because, by asserting full compliance with the policy (as issued) and its terms, the plaintiffs necessarily waive any challenge to the policy’s terms, particularly the PSE.

The reformation claim, brought by the plaintiffs, was based on an alleged oral agreement that Malik negotiated with the broker that preceded the formation of the contract, while the breach of contract claim in the original complaint was based on the written policy that included the PSE and with which the plaintiffs alleged full compliance. Therefore, there was nothing in the stand-alone breach of contract claim that put the defendant on notice that there was a prior oral agreement that excluded PSE and that PSE’s inclusion in the written policy was a mistake.

Plaintiffs’ complaint barred a factual or inferential basis for notice of mutual mistake by asserting without qualification that they “followed All of the terms precedent and subsequent in accordance with the terms of the subject policy.” The complaint contained no alternative theory of recovery or factual allegations based on transactions or events prior to formation. The complaint therefore only provided defendant with notice of transactions or events relating solely to the written policy and plaintiffs’ total compliance with the terms of the agreement, which includes PSE’s sprinkler requirements.

As a result, the reformation claim cannot relate to plaintiffs’ original pleading, as it only alleged compliance with the policy as written, and the district court abused its discretion as a matter of law in granting plaintiffs’ motion to amend to include this statute of limitations claim.

Plaintiff’s motion to amend the complaint to include a plea for reform is denied, and the case is remanded to the Supreme Court (trial court), New York County, for entry of judgment in accordance with the opinion herein.

The insured plaintiff and the attorney made a decision at the time the suit was filed to sue only for breach of contract even though the plaintiff knew he believed the policy issued was not what he ordered and when he learned of the defect – before the fire – it didn’t to correct the terms of the policy. Instead of contesting the PSE as an error, he sued, claiming that he had met the condition that he was informed that he did not exist. Only later, during the trial, did he seek reformation. The trial court erred and granted reformation because the defendant was not notified of the equitable claim and was sandbagged and unable to conduct discovery or produce evidence to counter the claim. Malik’s failure to respond to advice about the condition requiring PSE and his lack of appropriate PSE militated against his claim.