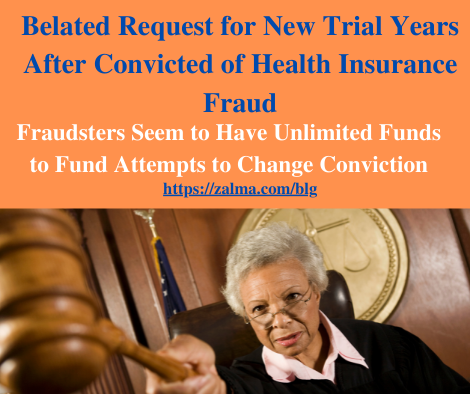 The case concerned fraudulent billing of the Blue Cross Blue Shield of Texas (“BCBS”) for hearing aids. On March 8, 2018, a jury sentenced Terry Anderson for the charges one – fifteen and Rocky Anderson for the prosecutors one – four, six and eight – fifteen in the indictment. The court later found that there was insufficient evidence to convict the defendants on counts one and eight, acquitted the defendants of those counts and handed down the verdicts on the other counts.

The government had more than 38 potential witnesses, who testified or were interviewed about events that took place over a decade ago, and at least one of them is now dead. It is reasonable to assume that the surviving witnesses’ memories of the events in question have diminished and would continue to deteriorate until a new trial took place. These factors significantly harm the government.

The exercise fails on the basis

Even if the court had reached the substance of the matter, the claim would have been rejected.

The defendants were convicted of healthcare fraud for submitting insurance claims for hearing aids that were medically unnecessary and for which the defendants did not make the necessary examinations.

The defendants claim that two pieces of information constitute newly discovered evidence which, if admitted, would result in an acquittal: first, they refer to the end, in January 2022, of a DOJ criminal investigation by the hearing aid company Eargo, Inc .; and secondly, they refer to an FDA rule proposed in October 2021, which would allow certain hearing aids to be sold without a prescription, without requiring an examination by a professional. None of this information is relevant to the convictions of the defendants, would not be included in the trial, would not require Brady/Giglio production and thus probably would not lead to an acquittal.

The unrelated investigation of Eargo is not new evidence that would give the defendants the right to a new trial. Defendants claim that the government has access to evidence underlying the DOJ’s decision not to prosecute Eargo criminally, which would acquit the defendant, as the defendants were also investigated for insurance fraud due to hearings on compensation for hearing aids.

Evidence from an unrelated DOJ investigation 2021-2022 is not relevant to the defendants’ actions, state of mind and criminal intent during 2011-2014, which was the subject of the case against the Andersons family.

The second alleged new evidence, a proposed FDA rule that would establish a new category of hearing aids that could be sold over the counter, without a hearing test, also does not constitute evidence that would entitle the defendant to a new trial. First, a change in the law does not constitute newly discovered evidence. Even if it did, the proposed rule is not relevant to the defendant’s fraud system, as the defendants did not sell over-the-counter hearing aids, but rather provided traditional hearing aids, subject to compensation from the insurance companies.

Because the proposed FDA rule would not be admissible at trial and therefore would not lead to an acquittal; thus, the motion failed in substance.

Insurance fraud is a very profitable and unusually effective crime. Even when the perpetrators of the fraud are caught, convicted and convicted, they have access to the millions of dollars they took from the insurance companies and the government from the fraud program, they can fund an appeal and when it fails, a late motion for a new trial based on rather false grounds. The USDC took the motion seriously and wrote a detailed statement explaining why the motion – apparently unjustified and filed late – was a ridiculous waste of court time and should have resulted in sanctions. It did not.