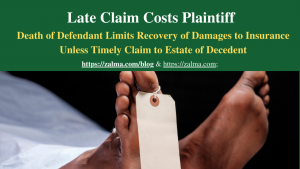 In Maryland, to facilitate prompt settlement of estates, a person must “bring” a claim against an estate within six months of the decedent’s death or two months after the personal representative sends an email or gives proper notice of the need to file a claim. within two months, whichever occurs first. Maryland Code § 8-103(a) of the Estates and Trusts Article (“ET”). Generally, if a plaintiff fails to meet these statutory time limits, the claim is “forever barred.”

In this case, the Circuit Court for Anne Arundel County ET used § 8-104(e)(2) to limit the amount recoverable from an estate to the limits of the decedent’s auto insurance policy.

On December 1, 2018, appellant Nicholas Shanefelter was involved in a car accident with the late James Hood, Jr. At the time of the accident, State Farm Mutual Automobile Insurance Co. the car that Hood drove.

Hood died on August 4, 2019, of causes unrelated to the accident. On September 30, 2019, Hood’s wife opened an estate on his behalf with the Anne Arundel County Register of Wills.

After a two-day trial in October 2021, a jury returned a verdict in favor of Shanefelter and against the estate in the amount of $285,977.69. A week after the judgment, the estate filed a motion asking the court to limit the amount of the judgment that could be recovered from the estate to the policy limit of $100,000.00. The motion did not expressly assert what the record already showed—ie. that Shanefelter had failed to timely present a claim pursuant to ET § 8-103(a). Shanefelter opposed the estate’s motion, arguing that he had filed a claim against the estate “as soon as he learned of the defendant’s death” and that the decedent’s insurer, State Farm, “had failed to settle the case in good faith.” Shanefelter did not argue that he had timely filed a claim.

The circuit court granted the estate’s motion in a written order filed on December 3, 2021. The order states, in pertinent part, that the estate’s “liability is limited to the defendant’s liability insurance in the amount of $100,000.”

In its brief, the estate rejected Shanefelter’s contention that he had timely filed a claim within the time limits prescribed by § 8-103(a). Citing the record of wills for Shanefelter’s claim, which it attached as an appendix to its deed, the estate showed that Shanefelter did not file his claim until March 6, 2020, more than seven months after Hood’s death on August 4, 2019.

The Court of Appeal concluded that Shanefelter’s claims were not valid. The tacit premise of the estate’s limitation of liability claim, as understood by all, including the circuit court, was that Shanefelter had failed to timely state a claim and thus that § 8-104(e) limited the amount that could be recovered from the estate. At most, he merely stated that he had brought the action as soon as he knew of the decedent’s death, which is insufficient to satisfy the requirements of § 8-103(a). Therefore, the trial court did not abuse its broad discretion in denying Shanefelter’s Motion for Reconsideration pursuant to Rule 2-535(a).

Because of his failure to file a timely claim, Shanefelter could at most recover the policy limits of the decedent’s policy.

The Maryland statute is not unusual. Since the estate was formed before the suit was filed, the plaintiff and his attorneys should have known of the defendant’s death and followed the requirements of the law. The case went to trial. Shanefelter received a favorable verdict but, because of the statute, was limited to the limits of the liability policy issued by State Farm and could not take from the estates assets.