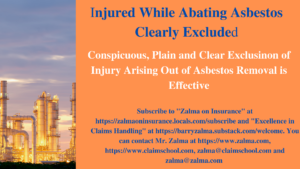 After a fire at one of its refineries injured two workers and killed one of them, the plaintiff Motiva Enterprises LLC (Motiva) sought insurance cover from the companies that insured the contractor who hired the workers. I Motiva Enterprises LLC v. National Fire & Marine Insurance Company, Axis Surplus Insurance Company et al., Maxum Indemnity Company A159229, A159231, A159233, California Court of Appeals, First District, January 10, 2022)

The Court of Appeal concluded in a summary judgment that because the workers had reduced asbestos, the exemption of the relevant policies from asbestos coverage

blocked. The Court of Appeal was asked to find surveillance for Motiva.

Motiva is one of the world's largest gas and diesel refineries and suppliers and owns and operates the largest refinery in North America, located in Port Arthur, Texas. According to an agreement dated December 1, 2015, Motiva hired Excel Modular Scaffold and Leasing Corp. (Excel) to reduce asbestos at the Port Arthur refinery. The agreement contained a broader "framework agreement". Under the framework agreement, Motiva would register Excel in its "Rolling Contractor Insurance Program".

Although all four insurances included exemptions from asbestos, the court settled the case by focusing on two of them: one in a primary policy issued by AXIS and one in the national fire policy The primary insurance issued by AXIS excluded coverage for bodily injury "arising directly or indirectly" from "deceleration, … cleaning, removal,. . . decontamination or disposal of, or in any way react to “asbestos. AXIS, Endurance and Maxim all issued surplus policies that adopted the asbestos exemption in AXIS 'primary policy. The National Fire Policy excluded bodily injury coverage "arising from… [the] asbestos removal."

An Excel team worked to reduce asbestos at the Port Arthur refinery from part of a refinery line that was 60 feet in the air.After the asbestos was removed, the crew was lowered to the ground and began washing the area with what they thought was water to remove any remaining asbestos from the scaffolding.But due to equipment or mechanical problems described in a sealed report, sprayed they were a flammable liquid, causing an explosion and fire.A crew member suffered severe burns and later died, and his boss suffered neck injuries and post-traumatic stress disorder.

paid them in the end as part of a settlement.

Motives sued the insurers o ch requested compensation for the settlement payment from Excel's insurer. As amended, the complaint set out the causes of action for declaratory relief, breach of contract and breach of the implied union of good faith and fair handling.

the basis that the exclusion of asbestos in either the AXIS or National Fire policy blocked coverage.

The Court of Appeal relied on exceptions to the policy which blocked coverage for all damages that "occur as a result of" asbestos reduction / removal. The insurance cover is interpreted broadly to give the insured the greatest possible protection, while exemption clauses must be interpreted narrowly towards the insurer. But California courts have broadly interpreted the terms "arise from" or "arise from." It has been established that this language does not import any specific standard for causation or theory of liability in an insurance policy. Rather, it broadly links an actual situation to the event that creates liability and suggests only a minimal causal link or temporary link.

It is common ground that the victims who sued Motiva worked to reduce asbestos on the day of the accident, and that their injuries were caused by a fire that occurred at the refinery at the end of their work day. Given these undisputed facts, it seems straightforward that the damage occurred due to a reduction in asbestos.

Motiva claims that the exemptions from asbestos did not apply because asbestos did not "cause" the accident according to an analysis of "related causal links". California's Supreme Court has interpreted Insurance Code section 530 as incorporating into California law the doctrine of effective causation, a rule of interpretation for first party insurance. The doctrine is the preferred method of resolving first-party insurance disputes that involve losses caused by multiple risks or hazards, at least one of which is covered by the insurance and one is not. The claims sought coverage, however, according to a third-party policy.

Motive has failed to determine the existence of another covered event than the asbestos remediation activity that simultaneously caused the accident. It is based on a series of cases where courts analyzed whether simultaneous causes led to damage, but these cases are inappropriate because there were no such simultaneous causes of the fire. There is no dispute here that there was a connection between asbestos removal and the victims' injuries.

The fatal fire would not have occurred without the asbestos reduction. It is simply not the case that Motiva's alleged liability is completely separate from asbestos or asbestos remediation. Any exemption from the fulfillment of the basic underlying obligation to defend and reimburse must be stated so clearly that it gives the insured knowledge of its effects. Therefore, the burden rests on the insurer to formulate exceptions and exceptions in clear and unmistakable language. The exclusion clause must be conspicuous, simple and clear. This rule applies with special force when the coverage part of the insurance would lead to an insured reasonably expecting coverage for the claim that is claimed to be excluded. on the insurer to establish that the claim is specifically excluded.

Motives focus on AXIS 'primary policy. The insurance included a section entitled "EXCLUSION-ASBESTOS" which, as Motiva admits, excluded coverage for bodily injury caused directly or indirectly by, among other things, "[a] new loss, cost or expenses incurred as a result of reduction, testing to monitor , clean up, remove, contain, treat, detoxify, neutralize, decontaminate or dispose of, or in any way react to or assess the effects of asbestos, asbestos fibers or any other form of asbestos, by any insured or by any other person or entity. ” It further excluded coverage for "[a] any damage or damage caused or alleged to have been caused by the removal, eradication, detoxification, decontamination or decontamination of asbestos or property containing asbestos." Contrary to Motiva's assertion, this is hardly a language that would leave a ordinary insured – let alone one of the largest petrol and diesel refineries in the world – "hopelessly confused by its overlapping regulations and its mysterious language."

Since there was No doubt that the injured workers were reducing asbestos, no need to rely on any strained or absurd definitions of these terms to conclude that the exemption applies. Insurance is a contract. When, as in this case, an exclusion is conspicuous, a court has no choice but to enforce the exclusion. .

The podcast "Zalma On Insurance" may be of interest at https://anchor.fm/barry-zalma; you can follow Zalma on Twitter at; you should watch Barry Zalma's videos on YouTube- https://www.youtube.com/channel/UCysiZklEtxZsSF9DfC0Expg; or videos at https://rumble.com/zalma. Go to Insurance Claims Library – https://zalma.com/blog/insurance-claims–library/ The last two issues of ZIFL are available at https://zalma.com/zalmas-insurance- fraud -letter-2 /