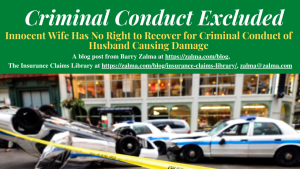 On October 14, 2019 – while the Safeway policy was in effect – Mr. Moon backed the vehicle into a police vehicle while attempting to flee from the police (“The Incident”). In Christian Moon v. Safeway Insurance Company of LouisianaNo. 2022-CA-0455, Court of Appeals of Louisiana, Fourth Circuit (Dec. 6, 2022) interpreted the innocent co-insured concept as it related to crime.

Safeway issued an automobile liability policy to Ms. Moon which covered a vehicle that she personally owned (the “Vehicle”). Moon’s husband, Herbert Moon, was listed on the policy as a permissive user. The following day, the police informed Moon that her husband had been arrested and that the vehicle had been towed. After that, Ms. Moon filed a claim with Safeway for the property damage to the Vehicle that occurred as a result of the Incident. Safeway denied Ms. Moon’s claim based on the criminal and intentional acts exclusions (the “Exclusions”) in its policy.

After Safeway’s denial of her claim, Moon sued Safeway. Moon asked not only for property damages, but also penalties for bad faith refusal to pay her claim.

After answering the lawsuit, Safeway filed for summary judgment based on the exclusions. Safeway supported its motion for summary judgment with an affidavit from its representative, Rhonda Marshall; and a copy of the deposition of the investigator, Christopher Bassil. Attached to Marshall’s affidavit was a certified copy of Safeway’s policy. The criminal charges included aggravated criminal damage to property, a violation of La. RS 2:55 p.m., for hitting the police vehicle.

Whether a policy provides or excludes coverage as a matter of law is an issue that can be resolved on summary judgment. When analyzing insurance policies, the following basic legal principles apply:

The current Safeway policy language provides that the policy under Part IV – Physical Damage – does not apply to, among other things, the following:

Mr. Moon was listed on the policy as a permissive user, and he was a resident relative. The exceptions, Safeway asserts, apply regardless of who was driving the Vehicle when it was used to commit a crime or to flee from the police. Mrs. Moon’s claim for damages arises from her ownership of the Vehicle. Her claim is for property damage only.

The exclusions, as applied, are clear and unambiguous; and the applicability of the exclusions to the facts underlying the action—the Incident—is not disputed. Rather, Moon’s contention is that the exclusions are against public policy and therefore should not be enforced because she was innocent and had nothing to do with Mr. Moon’s criminal conduct.

Mrs. Moon argues that state case law has recognized a policy against excluding coverage for an innocent insured acting in good faith.

Although exclusions from coverage are generally inconsistent with the policy of granting protection to injured persons, the exclusions here serve a separate public policy interest in prohibiting persons from insuring against their own intentional or criminal acts. Withholding insurance coverage for intentional or criminal acts helps deter such behavior, which in turn serves the purpose of eliminating reckless and irresponsible drivers from the highways.

The exclusion is designed to prevent an insured from acting wrongfully with the security of knowing that his insurance company will pay the piper for the damages. The purpose of the exclusion is recognition of a longstanding public policy against insuring illegal activities and thus promoting their implementation

Mr. Moon was an authorized user of the Vehicle he was driving when the offense was committed. The Court of Appeal found that the exceptions are clear, unambiguous and enforceable – the exceptions do not violate public policy.

The Court of Appeals addressed state public policy not to deprive an innocent co-insured of the right to recover for the acts of a criminal co-insured and that public policy refuses to allow a person to insure against his or her criminal conduct. Finding that the general policy against encouraging criminal behavior trumps the policy to protect the innocent co-insured. Mr Moon’s conduct was clearly willful and criminal and could not be encouraged by allowing his spouse to recover for the damage he caused to their vehicle. Other courts should emulate Louisiana and recognize that the general policy against insuring criminal or intentional conduct should trump policies protecting innocent co-insureds and should not encourage crimes such as arson.