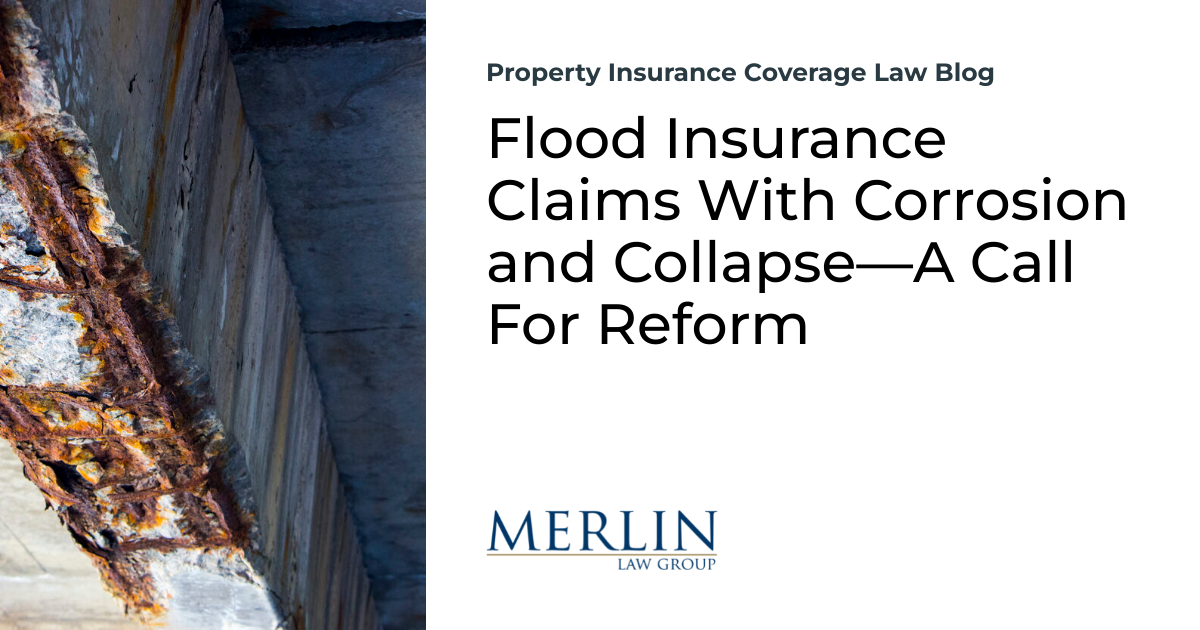 The post, Collapse from storm surge — Will National Flood pay these claims? led to a number of questions about whether these goals can be won. They may be, but it’s not easy. These federal flood claims are technically and legally demanding.

An example of a case-where our company did not represent the policyholder— shows many of the problems common to these scour and erosion cases after a storm surge.1 Federal flood trials are not jury trials. The federal judge makes the factual findings and applies the law. In this example, the federal judge found that much of the loss was the result of long-term corrosion that was not caused by the storm surge:

In considering the evidence, the Court finds Benton̵

7;s expert testimony more credible and useful than Calitus’ or Gulati’s. As to the damage to the piles, Benton generally provided specific, persuasive testimony consistent with Bernardin’s testimony. Bernardin testified that prior to Hurricane Irma, plaintiff’s maintenance personnel filled any cracks in the columns or beam assembly with material. . . so that the paintwork looks[ed] nice.’ But Bernardin testified that he did not know what material or process his staff used to fill the cracks.

Expert opinion is extremely important. I suggest that earlier corrosion should have been admitted and a higher fair cash value should have been advocated as wear and tear rather than claiming that it was all the result of the current flood.

The court made the following legal finding:

The policyholder must prove that the flood caused the damage. This again requires a very detailed expert opinion. The court simply believed the second version.

The policyholder must also prove the damages caused only by the direct impact of the flood:

Next, the Court turns to determine whether Plaintiff has met its burden of proving the specific, additional amount owed under the SFIP for repairs to the piles, concrete columns and beam assembly, and stucco on the exterior of the property. As a first matter and as stated above, the Calitu estimate is unreliable in light of the testimony and evidence that (1) it includes repairs to the property that Calitu admits are not covered by the SFIP; (2) it does not meet the definition of ACV, despite Calitu’s claim that it constitutes ACV; and (3) it includes incorrect rates for overhead and profit for a general contractor to oversee the repairs. See above section IBii; see also Mahood, 174 F.Supp. 2d at 292 (finding that an estimate “cannot be relied upon for a proper evaluation of the covered loss” because it included items not covered by the policy); Slater, 2015 US Dist. LEXIS 36824, 2015 WL 1310984, discrediting an estimate because the estimate and testimony did not address the issue of whether the specified repairs were covered by the SFIP). Further, at trial, plaintiff presented little evidence of the Calitu estimate other than admitting the estimate into evidence. Therefore, the extent of these repairs and how Calitu arrived at these estimates remains unclear.

Sometimes National Flood Insurance lawyers, in their eagerness to win, advocate for terrible law, which again calls for reform. These lawyers persuaded the learned federal judge to make the following most bizarre statement of insurance law, with which I respectfully disagree:

[T]the compaction injection and substructure did not exist at the time of Hurricane Irma. Therefore, the estimates to repair these items would not be considered ACVs under SFIP…because an ACV covers the cost of replacing an insured item, not repairing it. See SFIP art. II(B)(2) (defining fair cost value as ‘[t]the cost of replacing an insured property at the time of loss, less the value of its physical impairment’).

We need reform because the National Flood Administrators apparently only care about looking good when they make bad adaptation decisions, protecting their jobs and not protecting the integrity of the program and the people it is supposed to serve. If it were otherwise, they would never allow their counsel to make such an argument that a judge wrongly agrees. I’m not saying the result is wrong, but this reasoning is very wrong in the face of hundreds of years of insurance coverage law on the difference between replacement cost coverage and actual cash value coverage.

I’m sure the federal flood administrators hate a knowledgeable critic who points out how they are failing constituents and ruining the lives of people the flood insurance program was meant to protect. But they must be called out. Congress has to step in and do something – so does the president, because those who run FEMA report to him.

Federal flood claims are almost a “heads I win, tails you lose” scenario because of how federal law is applied. The ‘profit at all costs’ allowed by its council has led this flood program astray. These are hard cases, with no sanctions or penalties for bad faith or false denial. Federal court fees are ridiculously expensive due to the procedural requirements of the federal courts. How can someone litigate for less than $75,000 and pay a lawyer and experts to do all this and get any recovery? Fairness with the federal flood program is often a pipe dream, and reform is needed.

I’m not the only one calling for reform of the National Flood Program. In a previous post, Are some executives running the National Flood Insurance Program corrupt?, I noted that others have filed legislation to do so. Florida’s congressional delegation should follow up with hearings and join their colleagues from other states, making this program one our country can be proud of rather than what it has become for ordinary flood policyholders who suffer a second adjustment loss after the flood devastated them.