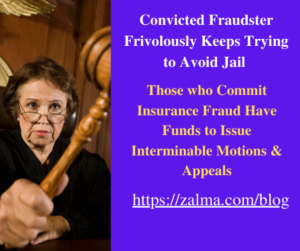 Judgments on insurance fraud are unreasonably rare and when the perpetrator is convicted, the convicted defendant appears to have unlimited means to appeal the verdicts. Imtiaz Shareef, following his conviction, without success in his first appeal, filed a new appeal, claiming that his lawyers had failed him.

On April 19, 2018, a federal grand jury indicted the petitioner Imtiaz Shareef, along with three co-conspirators, for a case of bank fraud and bank fraud conspiracy in violation of 18 USC § 1349 (Count One) and a case of money laundering conspiracy in violation. of 18 USC § 1956 (h) (Count Two). In the case of the first accused accused of “[f]rom in or around April 2009 till in or around April 2018,… [Petitioner and the coconspirators] deliberately… conspired… to commit crimes against the United States, including violations of Title 18, the United States Code, sections 1343 (wire fraud) and 1344 (bank fraud). “

Every person who attempts or conspires to commit any crime under this chapter shall be sentenced to the same punishment as those prescribed for the crime, the commission of which was the object of the attempt or conspiracy. [18 U.S.C. § 1349].

The petitioner proceeded to the trial and the jury convicted him on both counts. In the case of Count One, the jury specifically found that “wire fraud, in violation of 18 USC § 1343” and “bank fraud, in violation of 18 USC § 1344” were the subject of the conspiracy. The petitioner was sentenced to 57 months’ imprisonment on each count to be served simultaneously.

On appeal, the petitioner argued that “the insurance fraud system that supports the electronic conspiracy object of the conspiracy completed before the expiry date came into force and, although the prosecution came in a timely manner, insufficient evidence supported the jury’s judgment.” USA v Shareef, 852 Fed. App’x 92, 93 (4th ed. 2021). The fourth circuit upheld the USDC ruling. He also unsuccessfully claimed that evidence of previous actions was improperly acknowledged against him and that his legal counsel was ineffective in not requesting an “expert expert” jury instruction.

Not deterred by his failure in the fourth circle, on March 30, 2022, the petitioner filed a new motion in the USDC, making two claims:

Shareef asked that his conviction be overturned for what he claimed were many trial violations.

The verdict form submitted to the jury reflected the allegations made in the indictment. And, in accordance with the indictment, the jury found that “wire fraud, in violation of 18 USC § 1343” and “bank fraud, in violation of 18 USC § 1344” were the subject of the conspiracy. There was therefore no error in the prosecutor in relation to the fact that the prosecution was sufficient or how the accusations were presented to the jury.

Ineffective assistance from a lawyer

The Sixth Amendment to the US Constitution guarantees that the accused in all criminal cases has the right to the assistance of a lawyer for his defense. In order to demonstrate ineffective assistance by a representative, the petitioner must first establish a defective performance of the representative and, secondly, that the defective performance harmed him. In this assessment, there is a strong presumption that the representative’s conduct falls within the wide range of reasonable professional help. In addition, in assessing the prejudices of the analysis, the court can only grant relief if the outcome of the proceedings was fundamentally unfair or unreliable. In these circumstances, the petitioner bears the burden of proving prejudice. [Bowie v. Branker, 512 F.3d 112, 120 (4th Cir. 2008)].

If the petitioner, like Shareef, fails to meet this burden, an appellate court does not even have to take into account performance.

The appeal counsel is not obliged to assert all non-serious questions in the appeal. Rather, it is the hallmark of effective appellate advocacy to extract weaker arguments and focus on more promising issues.

A decision on appeal is entitled to the same presumption that protects a sound legal strategy. In addition, the petitioner still bears the burden of showing that there is a reasonable probability that the outcome of the proceedings would have been different if the representative had not raised an issue in the appeal. that is, he would have won on appeal.

The indictment clearly states that the purpose of the conspiracy was the violation of 18 USC §§ 1343 and 1344 and the petitioner was convicted accordingly. The petitioner’s litigation or appeal lawyers did not perform poorly for their failure to raise or try to support a frivolous argument.

The petitioner’s motion to vacate, revoke or correct a sentence under 28 USC § 2255 [Doc. 1] was denied and the USDC refused to allow further appeal.

The USDC refused to allow Shareef to abuse the lawsuit a second time and detained him in accordance with his conviction. The court, in addition to deciding on this frivolous motion, should have sanctioned Shareef and his lawyers for wasting the court’s time with a frivolous appeal.