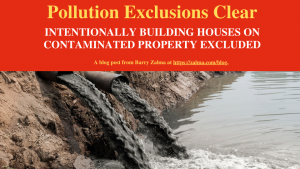 POLLUTERS ARE FORCED INTO BANKRUPTCY

Plaintiffs Victor Rosario, Nilda Maldonado, Jose Flores, and Noemi Flores appealed three Law Division orders dismissing their second amended complaints against the defendant insurers on dispositive cross-motions as to whether insurance coverage applies. After obtaining a nearly $2 million judgment against the bankrupt developer of their residential properties—for failing to disclose that their homes were built on contaminated property—plaintiffs sought the proceeds of the comprehensive general liability (CGL) policies that the defendant insurers issued to the developer. The motion judge in this action concluded that the pollution exclusion in the defendants’ CGL policy excluded coverage.

The plaintiffs purchased a single-family home from developer Marco Construction and Management, Inc. in 2006.

Unbeknownst to the plaintiffs, before Marco Construction subdivided the lots, they were being used by the former owner and co-developer, Stephan Musey, Jr., for commercial purposes that polluted the property. Automotive fluids and waste oil were released into floor drains and the ground. In 1988, the underground storage tanks were removed from the site without proper notification to the authorities. Subsequently, the Department of Environmental Protection (DEP) instructed Musey to conduct a remedial survey of the property, but it was not completed.

On December 31, 2004, Musey and Dominic Antonini, principal of Marco Construction, entered into a joint venture agreement to develop the property. Antonini was informed of the previous use of the property. Before Marco Construction took ownership of the property in February 2005, Antonini received several documents confirming the existence of outstanding environmental problems at the site; subsequently, Antonini learned that the property was contaminated. Later that year, Antonini built two detached houses on the divided plot. However, Antonini failed to disclose the environmental issues to the real estate agents or potential buyers, including the plaintiff.

The following CGL policies issued by the defendant insurers to Marco Construction are at issue in this appeal:

Both policies provided broadly similar coverage. Each policy contained virtually identical pollution exclusions and exclusions from those exclusions. Where applicable, the policies contained:

(a) At or from any premises, place or place at any time owned or occupied by, or let or lent to any Insured. However, this paragraph does not apply to: ….

The policies also contained exclusions for anticipated or intended damage, which exclude coverage, in relevant part, for: “‘bodily injury’ or ‘property damage’ anticipated or intended from the standpoint of the insured.” In addition, Western World’s policy excluded coverage for known injury or damage, defined as “bodily injury or property damage that first occurs prior to the inception date of the policy but continues to occur during the policy period if such bodily injury or property damage is known to any insured prior to the inception of this policy.”

The plaintiffs brought the underlying action. In May 2008, Marco Construction, through its insurance agent, filed a claim under Hartford’s policy, advising: “Plaintiff alleges that the insured subdivided a property that had known chemical contamination. After an investigation, on August 11, 2008, Hartford denied coverage during the pollution and anticipated or intended damage exclusions listed in its policy.

In June 2014, a five-day bench trial was held in the underlying case against the sellers and the developers. On October 16, 2014, the court issued a thirty-five page written opinion accompanying its aggregate judgment of $1,930,118.86, plus interest, on most of the plaintiffs’ claims. Among several other facts, the court noted, “Antonini knew that the pollution problems had not yet been resolved at the site when he agreed to allow Marco Construction to take title to the property.” The court further found that Marco Construction and Antonini were aware that “the property was contaminated before Antonini began to excavate the foundations” and “before he built any of the houses” because Trischitta, “told Antonini that ‘this land is polluted’.”

Following the plaintiff’s unsuccessful attempt to collect on the judgment, a writ of execution was issued against the assets of Marco Construction and Antonini in September 2018. However, the writ was returned unsatisfied.

Plaintiffs Antonini, Marco Construction, and Hartford subsequently sued to satisfy the judgment on October 16, 2014. In October 2020, Western World moved to dismiss the complaint for failure to state a claim. Immediately following the oral hearing on January 8, 2021, the motion judge issued an order denying the plaintiffs’ motions for summary judgment. The motion judge also determined the known damage exclusions and punitive damages barred coverage under the policies.

The interpretation of an insurance contract is a question of law for the court to decide and may be decided by summary judgment. Courts should interpret insurance policies according to their plain, ordinary meaning. If there is no ambiguity in the language, courts cannot write a better policy for the insured than the one purchased.

The Pollution Exclusion unequivocally excluded coverage for: “”bodily injury” or “property damage” resulting from the actual, alleged or threatened release, spread, leakage, migration, release or escape of “pollution”” on the property owned by Marco Construction during the Policy Periods . The records established Marco Construction and Antonini knew of the property’s contaminated status as early as 2004, when Antonini learned of the property’s previous use. The court therefore concluded that the insurers met their burden of showing that the pollution prohibition in their policies applied.

Accordingly, the court concluded that a certificate conferred no rights on its holder, Sterling Bank. The district court’s decision was upheld.

No insurance contract insures against any risk of loss. For the past few decades, CGL’s policy excludes pollution caused by injury, and all policies – for the past three centuries – exclude intentional acts. In this case, the developers, knowing that the property was contaminated, knew they were obligated to eliminate the contamination by order of the appropriate federal agencies, did nothing to cure the contamination, and built houses on the contaminated property and sold it to innocent buyers. That type of tort, and probably criminal act, is never something you can insure against.