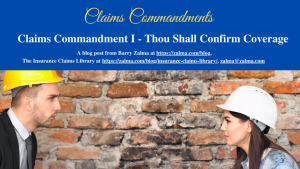 Claims Commandmeant i – You must confirm coverage

How to confirm coverage

When I was a young adjuster, I worked at the Fireman’s Fund insurance company. Sometimes confused policyholders and brokers reported to the Fireman’s Fund a claim intended for Fireman’s Insurance of Newark. The claim would often be adjusted and paid before anyone realized a mistake had been made.

When an injury or damage is reported to an insurance company, the first task required of the insurer and its claims staff is to confirm the existence of insurance. The task today is much simpler than it was when I was an adjuster where we had to pull the actual insurance file and review the daily report. Now coverage can be confirmed by computer.

If the insurer’s computer system shows that a policy was in effect at the time the insured reported a loss occurred, the first step to confirm coverage was completed. Next, if available digitally, the entire policy must be accessed including the declaration page and all policy wording, all recommendations and changes to standard policy language.

If the entire policy is not available electronically or cannot be reproduced by the underwriting department, the agent or broker should be directed to provide a complete copy of the policy to the adjuster. If the agent or broker does not have it, a copy must be obtained from the insured. Modern insurers now deliver policies to their insureds electronically in Adobe .pdf format which can be attached to an email from the insured at the request of the claimant.

Once the policy is obtained and available for review, the claimant must read and understand the coverages and compare them to the wording of the policy to confirm that one of the coverages promises to indemnify the insured against the risk of loss of the type reported. .

What these examples show is that the existence of insurance can be confirmed, and it can easily be confirmed that it existed at the time of the loss. What cannot be determined from the claim report and the insurance text is whether the coverage applies to the reported damage.

Communication with the insured

Once coverage is confirmed, the claimant must read the policy and the first written contact with the insured should inform the insured of any benefits, coverage, time limits or other provisions of an insurance policy issued by that insurer that may be applicable to the claim presented by an insured.

The letter should include, at a minimum, information such as the policy’s liability limits, any deductibles or self-insured retentions, advice regarding specific exclusions or conditions that may apply to the facts established in the notice of loss, a written note that a proof of loss is required within 60 days following the letter with an attached proof of loss form, a requirement to produce necessary documents, a reservation of rights (if required due to a potential coverage issue such as an exclusion that may apply), and any other information the insured needs to to prove his, her or his claim.

The indemnifier should also be prepared to supplement the initial letter whenever he or she becomes aware of different facts or additional insurance available to the policyholder or insured.

Failure to properly and in writing inform the insured of the policy provisions, the document requirement, the issues with coverage based on the initial claim, may place a claimant in unintended violation of the state’s fair claims settlement practices, statutes and regulations and expose the insurer to bad faith claims handling litigation.

Confirmation of coverage requires more than just checking a computer. It requires an understanding of the policy wording, the facts of the loss, and the law of the jurisdiction to determine whether coverage for a particular loss is available to the insured. Just reading the notice of loss, allegations in a lawsuit, and the policy is never enough.

The injured party’s first and foremost obligation is to confirm the existence of coverage by the insurer agreeing to insure the claimant. It is the beginning of the claims process and cannot on its own fulfill the obligation to confirm coverage before the adjustment begins because the applicability of the coverage may be affected by the claims investigation.