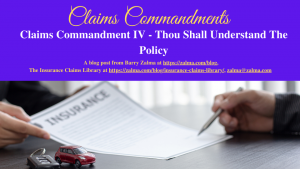 In this fourth of fifteen claims bids, we address the need for all insurance claims professionals to read and understand the terms of the policy that made promises to an insured making a claim.

Insurance is a contract

Insurance is a contract. To understand insurance claims, the adjuster must understand how all contracts, and especially insurance contracts, are interpreted. Rules of contract interpretation have been developed over the past 300 years and are applied by courts with the intention of fulfilling the wishes of all contracting parties.

People and judges who are not familiar with insurance and interpretation of insurance contracts find the insurance difficult to read and understand. They are wrong. But as a court said in Delancy v. Rockingham Farmers Mutual52 NH 581 (1873):

This [policy]if read by an ordinary man, it would be an inexplicable enigma, only a river of darkness and confusion … should any extremely eccentric person attempt to examine the involved and intricate web in which he would be entangled, he would find it to be printed in such small text and in lines so long and crowded that it becomes physically difficult, painful and possibly harmful to read the document.

Since 1873, insurance policies have been printed in large type and in a language, by law, that anyone with a fourth-grade education can understand. Nevertheless, there seem to be regular disputes before the courts about the meaning of the terms and limitations of the insurance policy.

The following rules govern the construction of insurance contracts:

For example, if the language written to limit an insurer’s liability to the appraised value appears on the declaration page, while the valuation clause providing for an actual cash value adjustment appears on a form endorsed in the contract, the language of the endorsement would control the interpretation of the conflicting language in the policy.

However, the fact that the two sentences could have been written more clearly did not mean that they were ambiguous.

Consider the reasonable expectations of the insured but, in doing so, include the understanding that each insurer is assumed to be familiar with the business that the insurer insures.

More than 150 years ago the United States Supreme Court i Hazard’s Administrator v. New England Marine Insurance Co., 33 US 557 (1834) adopted the rule. The Supreme Court concluded that “no injustice is done if insurers are presumed to know the industry of their insureds because it is part of their ordinary business.”

If you think the term is clear and unambiguous, there will be no need to apply the reasonable expectations test.

If you discover any ambiguity, or determine that the insured must be paid, applying the reasonable expectations test will allow a court to construe the policy against the insurer and in favor of payment of the insured’s claim.

Most states will apply the simple significance test.

Long established insurance law supports the conclusion that insurers are presumed to know and be bound by the meaning of the terms used and customs adopted in their insured’s industries. Insurers and insurance claims professionals faced with the need to understand and apply the wording of an insurance policy must now conduct their investigation to include:

To complete a thorough investigation, the insurer must at least conduct a detailed interview with the insured, applicants, brokers and underwriters. When there is a dispute as to the meaning of common terms, the court will often find it necessary to inform the understanding of persons in the particular insured business so that the judge must consult the opinions of experts.

An insurance practitioner can never make, or recommend, a decision regarding an insured claim until he or she has read the entire policy as it relates to a claim, interpreted the wording of the policy in accordance with the rules of interpretation set forth above, conducted a full and thorough investigation to determine the reasonable expectations of the insured, and if it is not possible to decide to seek advice from a competent insurance adviser.