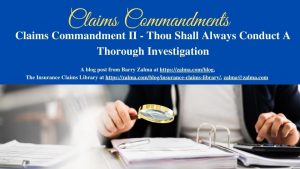 This is the second in a series of fifteen claims that I believe must be followed by all insurance companies.

Investigation is a search for truth. It is an art form where facts are established. It has been defined by the state of California, for example, as follows:

Courts will not subject an insurer to a choice between liability under a bad-faith-failure-to-investigate theory for publication of a denial of coverage without an adequate investigation. Liability may be imposed for a constructive denial imposed after the insurer has conducted a more thorough investigation confirming a prior decision of non-coverage, on the theory of delay combined with wrongful intent.

Although an insurance company has the right to make a thorough investigation to determine whether there is coverage under its policy, the company acts at its own risk by refusing to defend its insureds. If it is later determined that the company wrongfully denied coverage, the company will be liable for breach of its contract under the policy, but if done in good faith, it will not have to pay exemplary damages.

Insurers should do their due diligence as soon as possible. If a defense is required before the investigation can be completed, the prudent insurer will provide a defense to the insured subject to a reservation of rights, including a reservation to withdraw the defense and seek reimbursement for money expended in providing the defense under the reservation.

Where an insurer denies or delays payment of insurance benefits because there is a genuine dispute with its insured or where coverage is quite debatable as to the existence of coverage, the insurer will usually find that it is not liable in bad faith although it may be liable for breach of contract. A court gave the following instructions to a jury:

An insurer has an obligation to carry out an appropriate and thorough investigation before deciding on a claim. However, if the insurer, after conducting a thorough investigation of the facts and circumstances giving rise to a claim, can reasonably conclude that the claim is quite debatable or doubtful, there cannot be bad faith even if mistakenly, but in good faith , refused. to pay the claim.

The same requirement for a thorough investigation applies to first party property claims such as fire, lightning, storm and hail damage to property covered by the policy.

How to do a thorough investigation

Investigation to gather information is partly an artistic endeavour. The art is complemented by scientific techniques obtained from criminal investigators and professional psychologists but performed by individuals without thinking about what they are doing. The art of investigation must be honed until it becomes a matter of course just as a skilled typist does not think about where to put his or her fingers while typing.

The science of police interrogation relies heavily on human nature and the skills of the interviewer. The art of uncovering the truth of an allegor derives much from police science. Because the interrogation is formal, in a confined space, and conducted by an official such as a police officer or a lawyer questioning a witness under oath in court, the techniques used are more formal and controlled than an interview as part of an insurance investigation.

In order to carry out a thorough investigation, the claims investigator should at least do the following:

If it turns out that there is coverage for the claimed damage, the injured party must immediately notify the insured’s insurer of the decision. If it is determined that there is no coverage, the claimant must consult with management to review the facts gathered by the thorough investigation before making a decision.

Failure to carry out a thorough investigation is a breach of the insurance policy’s promises to provide defense and/or compensation to the insured. Failure to do so may also result in the insurer being sued for breach of contract and bad faith.

Insurers must, in order to comply with applicable law:

IN Eganthe Supreme Court concluded that “an insurer cannot reasonably and in good faith deny payments to its insured without carefully examining the basis for its denial.”