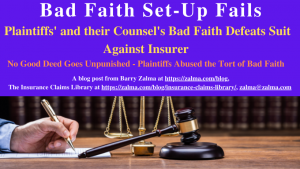 In September 2012, Frank McKenzie drove a vehicle that hit and killed Oscar Palma, who was riding a moped. At the time, McKenzie was insured under a Mercury policy with bodily injury liability limits of $15,000 and property damage limits of $10,000.

Mercury retained attorney Jeffrey Lim and instructed him to accept the offer. On October 19, 2012, Lim faxed a letter to the Carpenter company stating that Mercury is “tendering the estate and all heirs of Oscar Palma Mr. McKenzie’s $15,000 policy limit. [¶] To confirm that all heirs are included in the release of insurance limits, we ask that you have the heirs complete and sign the attached Declaration of the Heirs.” Carpenter did not respond to the letter.

On 24 October 2012, Lim told the Mercury that McKenzie agreed to a settlement. That same day, Lim wrote a letter to the Carpenter firm accepting “the offer to settle Oscar Palma’s death claim.” Lim enclosed a check for $15,000 and certified that, apart from the Mercury policy, there were no other policies for the loss. However, Lim inadvertently failed to attach McKenzie’s explanation to the letter.

On August 28, 2013, the Carpenter firm filed a lawsuit against McKenzie on behalf of the plaintiff, Ana Guzman-Palma, and “the estate of Oscar F. Palma, a deceased individual.” The complaint asserted causes of action for negligence, “survival action” and wrongful death. After a jury trial, the court entered a verdict against McKenzie and in favor of the plaintiffs for $3 million on their wrongful death claim. Mercury paid plaintiff its $15,000 limits for bodily injury.

McKenzie assigned his rights against Mercury to the plaintiff in exchange for a covenant not to enforce the judgment against his personal assets.

Mercury moved for summary judgment and presented evidence supporting the facts summarized above.

The trial court granted Mercury’s motion for summary judgment after determining that the Carpenter firm’s letter offered only to settle a survivorship action on behalf of the estate.

Plaintiffs argued that the trial court erred in granting Mercury’s motion for summary judgment because there are disputed facts as to whether Mercury unreasonably failed to accept their settlement offer.

California courts have inferred an implied duty on the part of the insurer to accept reasonable settlement demands for such claims within the policy limits.

An insured’s bad faith claim based on an alleged wrongful refusal to settle first requires proof that the third party made a reasonable offer to settle the claims against the insured for an amount within the policy limits. The plaintiff must also prove that the insurer has failed or refused to fulfill its contractual obligations, not due to an honest mistake, bad judgment or negligence, but rather by a knowing and intentional act, which unfairly defeats the agreed common purposes and disappoints the reasonable expectations of the other. party and thereby deprive that party of the benefits of the agreement. In assessing whether an insurer acted in bad faith, the critical question is the reasonableness of the insurer’s actions based on the facts of the particular case. To hold an insurer liable for bad faith in failing to settle a third-party claim, the evidence must show that the failure to settle was unreasonable.

Plaintiffs did not offer to settle their wrongful death claims

Because Mercury’s undisputed evidence shows that plaintiffs did not offer to settle their wrongful death claims, they cannot state a cause of action for bad faith refusal to settle those claims.

Mercury did not act in bad faith

Even if the Carpenter firm’s letter had offered to settle plaintiffs’ claims, Mercury would be entitled to summary judgment because no reasonable person could infer that it acted in bad faith. The undisputed evidence shows that Mercury urged Lim to accept the Carpenter company’s settlement offer under the terms of the October 15, 2012 letter. The only reasonable inference from this evidence is that Mercury would have settled the claims under plaintiff’s terms but for Lim’s negligence in not delivering McKenzie’s declaration. However, negligence alone is insufficient to support a claim for failure to settle in bad faith.

There was no evidence to show that Mercury refused to remove the property damage language from the release or otherwise required it as a condition of settlement. To the contrary, the undisputed evidence shows that Mercury separately attempted to settle any potential damages claims in November 2012, before the Carpenter firm informed it that there was no settlement related to the bodily injury policy limits.

Mercury made considerable efforts to accept the Carpenter firm’s offer. Among other things, it informed McKenzie of the offer, obtained his consent to accept it, submitted his full limitations on the bodily injury policy, made substantial efforts to obtain and deliver the requested information and documents, and expressed a willingness to amend the release of claim form.

The plaintiffs brought legal action against McKenzie, knowing that doing so would damage his credit and subject him and his family to extremely painful and embarrassing post-judgment debt collection proceedings. If anyone acted in bad faith, it was the plaintiffs and the carpentry company.

The Court of Appeals upheld an attempted misappropriation of the tortious bad faith claim that the plaintiffs acted in bad faith against an insurer that reasonably attempted to resolve a dispute against its insured by promptly accepting the settlement offer. The insurer’s good faith acceptance was ignored by the plaintiffs’ counsel who refused to accept the policy limits. Rather, the attorney made silly arguments like expecting a $10,000 property damage limit payment for a moped worth about $1,000.00. This was an incompetent bad faith attempt, with the court concluding that the plaintiffs acted in bad faith, not the insurer.