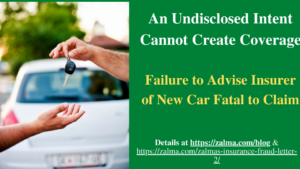 In 2019, Samuel Magura got a car insurance from Progressive. The insurance period extended from 23 May 2019 to 23 November 2019. On the declaration page of the insurance, Mr. Magura as the named insured and a 2016 Subaru Legacy as the covered car. Prior to September 19, 2019, Magura’s wife, Zarah-Marie Neme, was listed as the driver on the policy, but because she had lived outside the country, she was not a named insured.

The policy provided that Progressive would pay damages for any bodily or property damage for which an insured person was found legally responsible. The policy also provided that Progressive would settle or defend any claim for damages. However, the policy excludes from coverage “bodily injury or property damage arising out of the ownership, maintenance or use of any vehicle owned by [the insured] . . . other than a covered car.” The policy defined a “covered auto” to include an auto shown on the policy declaration page and “any additional auto.” An “additional auto” was defined as a car that you become the owner of during the policy period and that is not permanent replaces a car shown on the declaration page if:

At some point during the conversation, Mr. Magura any specific information about a new vehicle he had bought or was thinking of buying. After the phone call, the updated declaration page on Progressive’s website showed an increased premium of $93.53 with the 2016 Legacy as the only car covered.

On September 20, the appellants purchased a 2019 Subaru Impreza. On October 22, Neme was involved in a motor vehicle accident while driving a 2019 Impreza. After the accident,

The plaintiffs later described the 2019 Impreza as a total loss, although they had to continue making payments on the vehicle. The following year, the appellants were sued by the other party to the accident for damages resulting from the collision. Based on the prior denial of coverage, Progressive did not defend the appellants in this suit.

The plaintiffs then sued Progressive.

Plaintiffs’ claims against Progressive all hinge on whether the 2019 Subaru Impreza was a covered vehicle under Progressive’s policy, either by virtue of the terms of the policy or through Progressive’s specific insurance policies.

Because the Impreza was not a covered car, plaintiffs cannot support their breach of contract claim.

Did Progressive say or do anything to imply that the 2019 Subaru Impreza was a covered vehicle?

Progressive did not say or do anything that could reasonably have led the plaintiffs to believe that the 2019 Impreza was a covered vehicle under the terms of the policy. Progressive quoted an increased premium to Mr. Magura, but it was based on the addition of Ms. Neme to the insurance. The later issued declaration page listed both Mr. Magura and Ms. Neme as named insured, but the only covered vehicle listed was the 2016 Subaru Legacy.

If a person wants to insure a new car, he or she must notify the insurer of the purchase, the intention to insure it, the vehicle identification number and who would be insured. Magura added his wife as an insured but never told the insurer that he had purchased and needed insurance to operate the 2019 Impreza. Failure to act properly deprived Magura and Neme of insurance coverage.