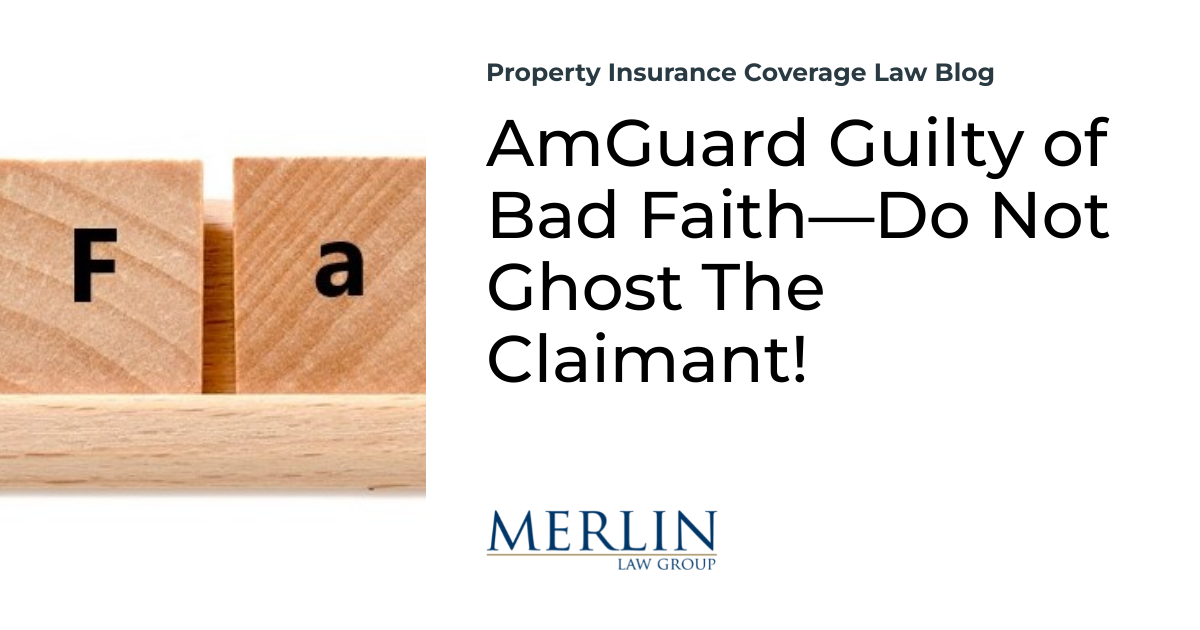 AmGuard has had problems with delayed claims where it does not promptly respond to inquiries from its customers or make claim payments. A new jury verdict in Missouri found AmGuard guilty of vexatious refusal to pay a fire, vandalism and resulting freeze claim. I have previously noted similar AmGuard conduct from a Washington case in Claim delays lead to bad faith judgments.

Two letters attached to the complaint show the “ghosts”1 The first letter of 9 November 2020 stated:

This letter follows my attempts to contact you via email and voicemail regarding the status of the above matter. I understand that Jennifer A. Turner of Summit Insurance Group has similarly attempted to contact you regarding the aforementioned claim. However, to date, neither you nor anyone else at Berkshire Hathaway Guard Insurance Companies (“BHG”

😉 has responded to our questions.

As I stated in my email of September 22, 2020, I have been retained to represent Academy Bank, NA, in the above claim. Academy Bank is the mortgagee and loss payee under the policy issued to Shri Ganesai, LLC (see attached recommendation for “Changes to Business Owner’s Policy”).

You are already well aware that Shri Ganesai, LLC, has made a claim under the policy regarding a fire loss that occurred on the insured’s property on or about October 2, 2019. I understand that BHG is still processing and investigating this claim and that it has not yet any coverage determination relative to Shri Ganesai, LLC.

… It has now been over a year since the subject of fire loss and Academy Bank needs some information on what is delaying BHG’s coverage decision.

Reference is made to that letter dated November 9, 2020, from former counsel to the Academy, Norris Keplinger Hicks & Welder, seeking information on the insurance and claim. The requests for information on behalf of the Academy have been ongoing since at least September 2020. The requests and demands made therein are reproduced and incorporated by reference herein. We are not aware of any response from the insurer. The Academy continues to require delivery of all policy documents and all grounds for withholding payment under the policy to the Academy.

Accordingly, the Academy requires payment in immediately available funds to the Academy by March 15, 2021. If payment or delivery of the document or the basis on which payment is not due is not received by that date, the Academy will take legal action…

I hope these lawyers weren’t holding their breath expecting an answer. We have seen this type of lapse from AmGuard in other cases.

After the lawsuit was filed in April 2021, AmGuard finally made partial payments.

The jury verdict last week found for the policyholder and the loss payee. The jury awarded contract, vexatious refusal and attorney’s fees damages against AmGuard.

Insurance companies are required to act in good faith when adjusting losses and responding to claimants. These types of jury verdicts hold the insurance company liable when they fail in that duty.

As you develop a reputation for being responsive and generous, an ever-growing mountain of requests will come your way.
—Adam Grant
__________________________________________________
1 https://en.wikipedia.org/wiki/Ghosting_(behavior) Ghosting, also known as simmering or icing, is a colloquial term that describes the practice of ending all communication and contact with another person without any apparent warning or justification and then ignoring any attempts to reach out or communications made by said person. The term originated in the early 2000s and usually refers to dating and romantic relationships. In the following decade, the media reported an increase in ghosts, which has been attributed to the increasing use of social media and online dating apps. The term has also been extended to refer to similar practices among friends, family members, employers and businesses.