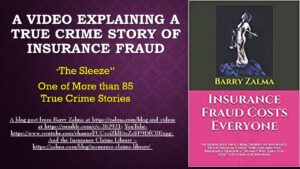 See the full video at https://youtu.be/LD7NJuN5itU and https://rumble.com/vdvuld-a-true-crime-story-of-insurance-fraud.html [195659003] Sleaze was not a nice man. He learned the safe way to steal in prison. A judge in the Supreme Court had sentenced him to two years in prison for falsifying his mother's will.

His cellmate, an armed robber, brags about his successful brother. The brother had found a new career that claimed the theft of small jewelry on the homeowner's policy. Insurance companies always paid, whether he owned jewelry or not, rather than fighting. His cellmate explained how prosecutors had no interest in this type of crime. Insurance companies that fear that judgments on punitive damages would pay even when the claim was fraudulent.

Sleaze promised that when he got out of prison he would commit this safe form of crime.

Sleaze was a man of his word. Immediately after leaving prison, he bought a tenant's policy for homeowners. He asked for and no doubt received a $ 10,000 jewelry extension from the company. His liability limit, instead of the usual $ 1,000, was $ 10,000.

On the surface, Sleaze failed in his fraudulent claims against the insurance company. He managed to commit fraud. He managed to raise the reasonable costs of defending fraudulent insurance claims beyond logic. He placed a lawyer in fear for her life and cost her law firm and the insurer she represented the cost of a bodyguard. Anyone who believes that insurance fraud is not a violent crime never met Sleaze.