A house is not built of magic 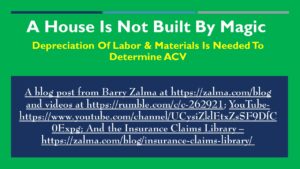 I have argued against the courts that claim insurers, when deciding, ACV, should only write off materials and not labor. To reach such a conclusion, the courts must conclude that a house is magically built from materials that never require a person to work to bring these materials together to create a home. In Thomas Accardi v. Hartford Underwriters Insurance Company, No. 42A19, 373 NC 292 838 SE2d 454, the Supreme Court of North Carolina (February 28, 2020), the Supreme Court ruled with logic and common sense when requested to determine that ACV can only be determined by the depreciation of materials and not the work required to complete a repair.

The plaintiff owns a home in Fuquay Varina, North Carolina that was damaged in a hailstorm around September 1, 2017. The storm caused damage to the roof, exterior and garage of the plaintiff's home and required repair and restoration. At the time of the damage, the home was insured by the defendant.

The plaintiff filed a claim with the defendant and demanded payment for the damage to the home. The defendant confirmed that the damage was covered by the plaintiff's policy and sent an adjustment to inspect the home on September 26, 2017. The adjuster inspected the property and made an estimate of the cost of repairing or replacing the damaged property. It is estimated that the plaintiff's home suffered $ 10,287.28 in loss and damages. This estimate included costs for materials and work to repair the home, as well as VAT on the materials.

You will note that your policy includes ACV loss settlement for covered windstorm or hail losses to your roof. This means that if there is a covered windstorm or hail loss on your roof, [defendant] will deduct the depreciation from the cost of repairing or replacing the damaged roof. In other words, [defendant] will replace the actual cash value of the damaged roof surface minus any deductible insurance. (emphasis added)

In the present action, the defendant calculated ACV by reducing the estimated cost of repairs by depreciation on property and work, as set out in the restricted approval. Thus, the plaintiff's total estimated repair cost for the home and other structures decreased, $ 10,287.28, with a deductible of $ 500 and depreciation of $ 3,033.92 – which included the depreciation of both labor and materials. This resulted in the plaintiff being issued an ACV payment of $ 6,743.36. According to the appellant, the defendant was obliged to separately calculate materials and labor costs to repair or replace his damaged property and deduct only the material costs, not the labor costs, from the total repair estimate when determining the ACV. Based on this argument, the plaintiff sought to represent a class of all North Carolina residents to whom the defendant paid ACV payments, where the labor cost was deducted. ACV includes depreciation of both work and materials. The Commercial Court concluded that "the term ACV as used in

To determine otherwise, the court said, would be to incorporate a non-existent provision in the policy that excludes labor costs. In the Court's view, it is "not logical to distinguish the cost of labor from physical materials when assessing the depreciation of a house or its components", when the value of a house is more than just the cost of materials used.

Courts outside of North Carolina are divided into whether the term "depreciation" includes both labor and materials. Decisions from other jurisdictions, however, provide little guidance to the court because the language of insurance in each individual case differs meaningfully, as do the insurance laws of each state.

The Supreme Court concluded that "Actual cash value", as used in politics, is not susceptible to more than a reasonable interpretation and the term unambiguously includes costs for depreciation of work. Although the basic policy fails to define the term, the roofing supplement provides a definition that must be read in harmony with the rest of the policy.

The term "depreciation" is also not ambiguous. The language of the police does not give any justification for distinguishing between work and material when calculating depreciation, and to do so is a bit meaningful.

The value of a house is determined by considering it as a completely complex whole, not as the simple sum of its material components. To conclude that labor is not depreciable in this case would "impose on the company liability which it did not assume", and provide a benefit to the plaintiff for which he did not pay.

The Supreme Court of North Carolina refused to do so and concluded that the insurance policy in question unequivocally allows for the depreciation of labor and materials costs.

Until technology creates a method of building a home without manpower from any human being when determining ACV with the common technique of determining replacement value and then depreciating the cost of reaching ACV, it only makes sense to depreciate the full cost of repair or replacement. Since it is impossible to build a house or repair a roof without labor, the Supreme Court's decision in North Carolina is obvious and those who control labor cannot or should not be written off are illogical and a way to punish an insurance company by letting insurers pay a benefit that they did not assume and for which the insured did not pay.

For the past 53 years, Barry Zalma has devoted his life to insurance, insurance claims and the need to defeat insurance fraud. He has created the following library of books and other materials to enable insurers and their claims staff to become professionals in insurance claims. Follow Zalma on Twitter at https://twitter.com/bzalma ; Go to Barry Zalma videos on Rumble.com at https://rumble.com/c/c-262921; Go to Barry Zalma on YouTube- https://www.youtube.com/channel/UCysiZklEtxZsSF9DfC0Expg; Go to the library for insurance claims – https://zalma.com/blog/insurance-claims- bibliotek / Read posts from Barry Zalma at https://parler.com/profile / Hymn / post; and the last two issues of ZIFL at https://zalma.com/zalmas-insurance-fraud-letter-2/ podcast now available at https://podcasts.apple.com/us/podcast/zalma-on -insurance / id1509583809? uo = 4