A five-year lease is not temporary 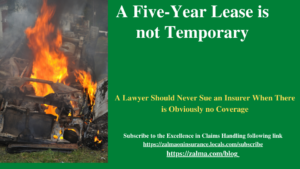 This case involves an insurance dispute in which Appellant, Benjamin G. Dusing (Dusing), claims that a leased 2016 Mercedes was properly insured by Appellee, Metropolitan Property & Casualty Insurance Company (Metropolitan). Metropolitan waives coverage for the vehicle, which was destroyed by fire on June 25, 2016.

IN Benjamin G. Dusing v. Metropolitan Property & Casualty Insurance Company, no. 2021-CA-0200-MR, Court of Appeals of Kentucky (August 26, 2022) Dusing claimed he was driving the vehicle when it caught fire. As part of Metropolitan’s refusal to pay, Dusing sued for declaratory judgment in Kenton Circuit Court on June 21, 2017. The court subsequently granted what is styled Metropolitan’s “Motion for Judgment,” on the basis that there was no coverage under the terms of the policy at Metropolitan (hereinafter the insurance).

A motion for summary judgment should be granted if the pleadings, depositions, answers to interrogatories, stipulations and admissions contained in the record, together with any objections, show that there is no genuine issue of material fact and that the moving party is entitled to judgment according to law.

We will pay for loss to your covered car or to a non-owned car, including its equipment, not caused by a collision, less any applicable excess shown on the declarations. Coverage is included for a loss caused by but not limited to the following:

2. a commercial rental car or trailer used by you or a relative on a temporary basis.

In entering judgment in favor of Metropolitan, the circuit court reasoned as follows:

On March 31, 2016, BGD Law, a law firm owned by [Dusing] leased 2016 Mercedes for a period of five years or 60,000 miles. That lease also provided a 24-month service agreement. The lease also charged BGD Law fees for licensing and registration of the vehicle.

It is undisputed that Dusing failed to purchase insurance coverage for the 2016 Mercedes. Therefore, it is not a “covered vehicle” under the policy which, to be clear, is Dusing’s personal policy.

The Court of Appeal was logically inclined to agree with the circuit court that a vehicle covered by a five-year lease cannot reasonably be considered “unowned” for purposes of the policy. Indeed, it strains credulity to consider the 2016 Mercedes in question here as a “commercially leased” vehicle used “temporarily,” simply because it was leased by Dusing’s law firm. Therefore, it was unreasonable to conclude that Dusing had a “reasonable expectation” of coverage.

This case is an example of a lawyer trying to force an insurer to pay for a loss that he knew, or reasonably should have known, was not covered by his personal auto insurance policy. A car leased by his law firm and provided for his use is not a personal car, leased for five years could not be considered “temporary” under any concept of reason, and should have been insured by the law firm that leased it. Although he had an insurable interest in the Mercedes, he failed to notify the insurer that it was leased for his use, nor did he pay any premium for the insurance. Taking the case to the Court of Appeal was a waste of his time, the Court of Appeal’s time and the Court of Appeal’s time.