A Bad Faith statement in a vacuum is not remediable. 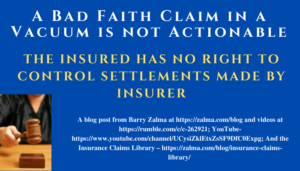 Moses Taylor Foundation on behalf of Moses Taylor Hospital ("Moses Taylor"), to recover damages for the alleged breach of contract by Defendant, Coverys and Proselect Insurance Company ("Coverys") for failure to negotiate a desirable settlement in a previous trial ("the underlying trial"). I Moses Taylor Foundation O / B / A Moses Taylor Hospital v. Coverys and Proselect Insurance Company CIVIL No. 3: 20-CV-00990, United States District Court, MD Pennsylvania (November 22, 2021) The USDC was faced with a claim that the damages alleged by the plaintiff were speculative because they had not been damaged. The court gave the plaintiffs a chance to rectify and then decided on the motion to dismiss the amended complaint.

The Pennsylvania Trust Company, as guardian ad litem for a minor plaintiff, brought an action against Moses Taylor after the minor plaintiff allegedly suffered "serious, permanent, Disability birth defects "while receiving treatment at the hospital. Coverys, as Moses Taylor's insurer," provided a defense and legal representation "for this trial, during which Coverys" directed, controlled, supervised, over [saw] financed, [and] strategized "about the action," including doing, participating in, and / or providing advice and counseling [Moses Taylor Hospital] on whether. . . to decide the action before the judgment. ”

In February 2019, the minor plaintiff made a claim on the insurance limits for the insurance coverage that Coverys provided to Moses Taylor. A few days after the claim, Moses Taylor claims that they informed Coverys about the need to resolve the matter within their policy boundaries at the scheduled conference on March 1, 2019. Moses Taylor claims that it persuaded Coverys to participate in a high-low arbitration after Moses Taylor joined to contribute $ 500,000 of their own funds. The "low" limit was set at $ 2,500,000 and the "high" limit was set at $ 7,750,000.

Following Covery's presentation at the arbitration, the minor plaintiff filed a final claim of $ 6,000,000 to resolve the case in its entirety. Moses Taylor claims that it directed Coverys to resolve, or attempt to resolve, the controversy for such an amount. Moses Taylor claims that Coverys once again failed to resolve the case or reasonably engage in conciliation discussions. The arbitrator sentenced the minor plaintiff to "a substantial sentence, which grossly exceeded the settlement figures, and well… Exceeds the agreed" high "limit." Coverys & # 39; paid $ 7,750,000.

Moses Taylor sued. It claimed that the insurer had breached the agreement, in bad faith, and claimed damages of $ 1,750,000. After losing Moses Taylor, with the permission of the court, Moses Taylor filed an amended complaint.

The amended complaint is almost identical to the original complaint. Separately documented is a provision between the parties that agrees that the state's action has been decided within the policy boundaries. Coverys filed a second motion for dismissal on identical grounds as the first.

In this case, Coverys argues that the amended complaint should be dismissed for the following reasons:

Moses Taylor's claim for breach of contract must be rejected.

Coverys decides to dismiss Moses Taylor. claim for breach of contract because Coverys claims that Moses Taylor has failed to claim tangible non-speculative damages. Moses Taylor is seeking damages based on the depletion of available insurance coverage "to resolve additional existing and / or future cases" that would have been available if Coverys had settled the underlying lawsuit at Moses Taylor's request.

Coverys claims these damages are speculative because Moses Taylor has not yet had to pay out of pocket for any settlement because of the insurance coverage that was exhausted.

The only new information that Moses Taylor provides in the amended complaint is related to the State's action. According to the provisions provided by the parties and signed by the court, the state measure has "settled within the limits of the insurance per claim and total coverage". As it has been established that the State measure was decided within the policy boundaries, there is no harm to Moses Taylor.

In addition to the government measure, the amended complaint only claims that the depleted coverage may affect further existing and / or future cases. This is not a correct invocation of tangible damages. While Moses Taylor discusses the ten-year limitation period that could expose Moses Taylor to the liability of other plaintiffs, it is possible that such potential plaintiff will never bring an action. As a result, any damages are speculative because there are no ongoing lawsuits or damages suffered.

Moses Taylor's claim of bad faith must be rejected.

Coverys argued that if Moses Taylor has failed to properly invoke a breach of contract claim, then there is no basis for the claim in bad faith. There must be a claim to a predicate agreement in order for a statutory evil claim of faith to be able to continue. A breach of contract claim can serve as such a starting point for the action.

Moses Taylor's claim for deputy responsibility must be rejected.

Under Pennsylvania law, a claim for deputy liability requires a separate claim for which liability is asserted. Alternate responsibility means that a principal can be held responsible for the actions of his agent. A principal / representative relationship can be established through employment where the employee is an agent and the employer the principal and the act was committed within the framework of the employment.

Because the court rejected the claim for breach of contract and bad faith. claim, there is no basis for the action for which the principal, Coverys, may be liable. Due to the lack of prior action, Moses Taylor's claim for deputy responsibility will be rejected.

The amended complaint must be rejected with prejudice.

Moses Taylor's amended complaint will be rejected with prejudice as it would be pointless to allow another change when no damage has been caused and the plaintiffs have already had the opportunity to change.

The court found that Moses Taylor has failed to rectify the defects specified with respect to the original complaint and has continued to invoke speculative damages. The court further found that the claims of bad faith and deputy liability required a valid basis for the action, and without a valid breach of contract claim they are not the subject of the action. Therefore, the court will uphold the claim for dismissal of the amended complaint with prejudice. . The insurer, in this case, refused to reconcile, agreed to participate in a high / low arbitration award and when the arbitrator gave a judgment that was higher than the high limit, it paid the agreed high limit that was lower than the available limits in its policy for Moses Taylor. Because Moses Taylor did not suffer any loss – to claim that it may have a loss in the future due to the depletion of policy boundaries, is speculative because it may never be sued. There was therefore no injury and no injury to the insured.