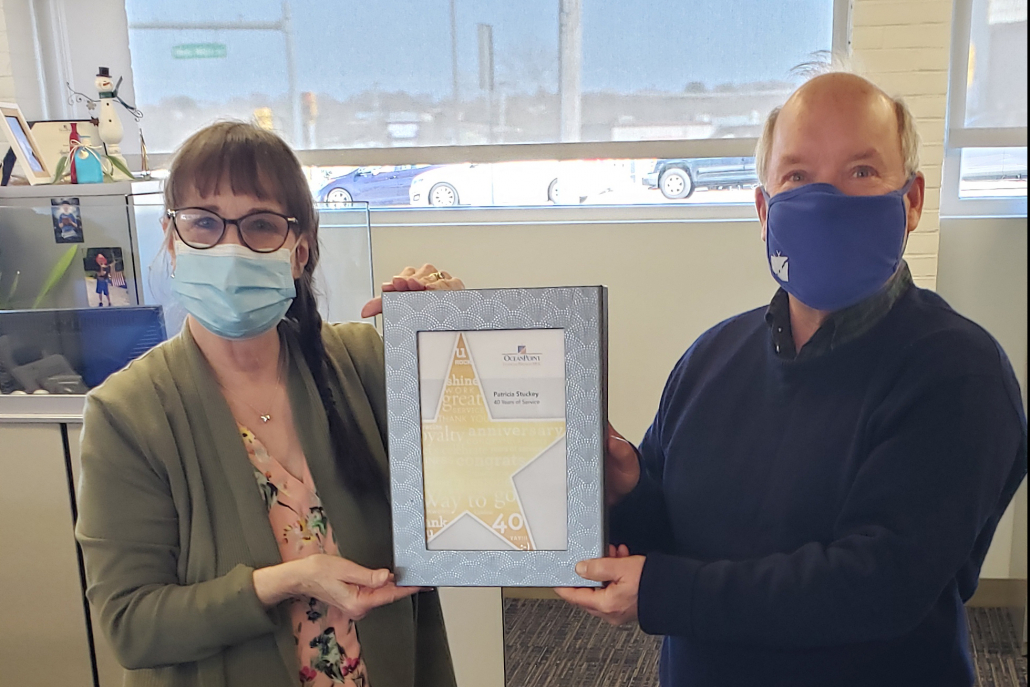 We all at OceanPoint Insurance congratulate Pat Stuckey on her 40 years of service. A fantastic milestone for employees!

In 1981, Pat began working for the Gustav White Insurance Agency, Bellvue Avenue, Newport, which later merged with the Packer Braman Agency. The new agency, Braman White Insurance, was acquired by BankNewport in 1998, which then created the OceanPoint Insurance Agency. Pat was there when we arrived.

Gerry Dwyer and Peter Dunn (who would later become Pat's boss) interviewed Pat for employment with the Gustav White Insurance Agency. At the time, she knew nothing about insurance but was ready and willing to learn. And to aggravate Pat's interview anxiety, she was informed that the office had just received its very first computer and that Pat, if hired, would use this new technology; these were trend-setting things in an office environment in 1

981! At this point in the interview, Pat was at best insecure and at worst terrified that she would be working on a device she had only seen before in sci-fi movies! Peter could see Pat's insecurity and tried to calm her down by informing her that he could use the computer. Phew !, that was really good news and calmed Pat down until Peter showed her that his computer skills were playing a baseball game!

Throughout his career, Pat has made a positive contribution to OceanPoint's success, beginning with its lower echelons and growing into his current role as Personal Lines Account Manager.

During his 40 years with OceanPoint, Pat has witnessed a great deal of change in the office environment. In the beginning, document errors were corrected with liquid paper (whiteout), and there was a computer in the office that was "not used" to play baseball! Decades later, every employee ran a computer. Computer networks enabled office automation, and in the new millennium, mobile devices were used for communication.

Pat has announced his plan to retire, with his last day this Friday, July 2nd. Pat looks forward to relaxing and spending time with his family. Her OceanPoint family will surely miss her laughter and infectious smile. We are truly grateful for our time working with Pat and for all she has done to help our business grow. We wish her all the best!